Protests erupt after Wisconsin police shoot man from behind 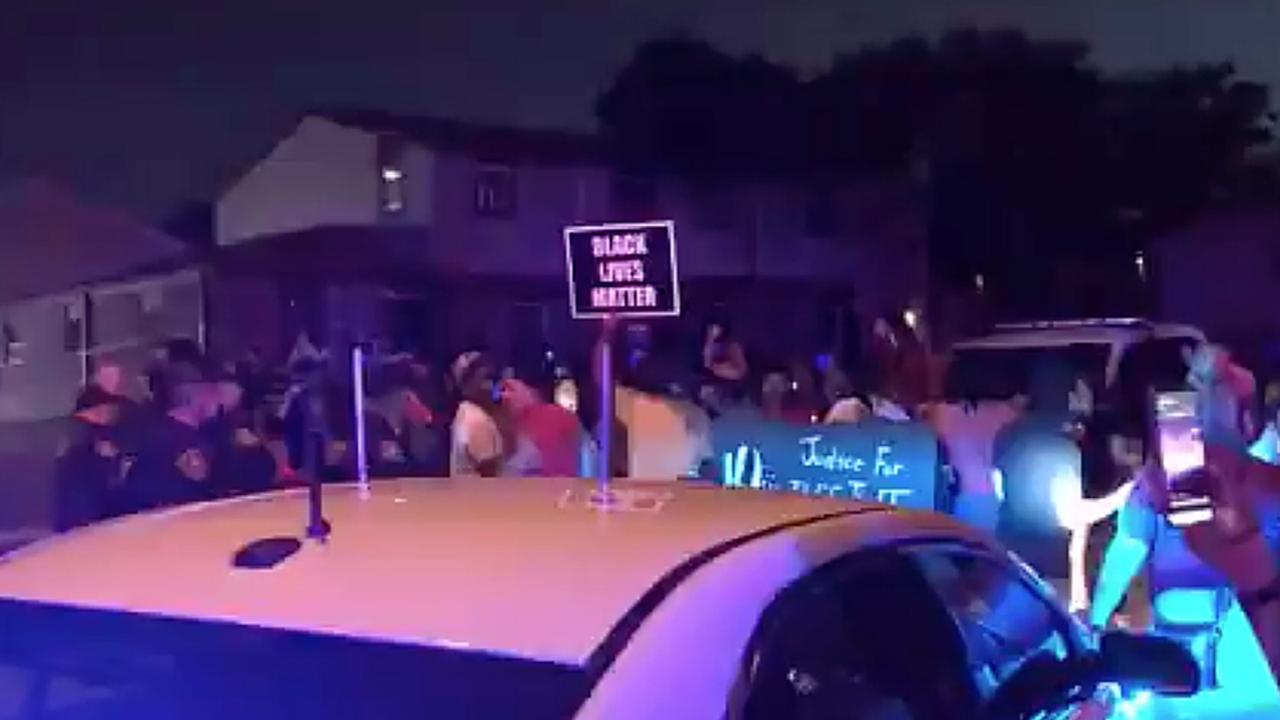 n this image made from video, protesters gather near the site of a police shooting, Sunday, Aug. 23 in Kenosha, Wisconsin. Officers deployed tear gas early Monday in an effort to disperse hundreds of people who took to the streets following a police shooting in Kenosha that also drew a harsh rebuke from the governor after a video posted on social media appeared to show officers shoot at a Black man’s back seven times as he leaned into a vehicle. (WDJT-TV via AP)

Officers deployed tear gas early Monday to disperse hundreds of people who took to the streets following a police shooting in Kenosha that also drew a harsh rebuke from the governor after a video posted on social media appeared to show officers shoot at a Black man’s back seven times as he leaned into a vehicle.

One individual was hospitalized in serious condition following a shooting by officers about 5 p.m. Sunday as officers were responding to a “domestic incident,” the Kenosha Police Department said in a news release. Police did not provide details about what led to the shooting but said the person was transported to a hospital in Milwaukee for treatment.

By late Sunday, multiple vehicle fires had been set and windows smashed along city thoroughfares as crowds faced off with law enforcement. Officers in riot gear stood in lines and SWAT vehicles remained on the streets to move people away from city buildings despite the declaration of an overnight curfew. Tear gas was used to disperse groups of people, according to reporters at the scene.

In the video posted earlier on social media that appeared to show the shooting from across a street, three officers could be seen shouting and pointing their weapons at the man as he walked around the front of a parked SUV. As the man opened the driver’s side door and leaned inside, one officer grabbed his shirt from behind and then fired into the vehicle. Seven shots could be heard on the video, though it was unclear if more than one officer fired.

Gov. Tony Evers on Sunday night condemned the shooting of the man whom he identified as Jacob Blake, saying in a statement that “while we do not have all of the details yet, what we know for certain is that he is not the first Black man or person to have been shot or injured or mercilessly killed at the hands of individuals in law enforcement in our state or our country.”

The Wisconsin Department of Justice, which is investigating the shooting, did not release any details about the involved officers except to say they have been placed on administrative leave.

Following the shooting, social media posts showed neighbours gathering in the surrounding streets and hurling comments at police. Some could be heard chanting “no justice, no peace” while others appeared to throw objects at officers and damaged police vehicles.

Later Sunday, in a scene that mirrored the months of protests over racial injustice around the world that have followed the deaths of George Floyd, Breonna Taylor and other Black people killed by police, marchers headed to the Kenosha County Public Safety Building, which authorities mostly blocked off. Protesters marched along lines of cars honking on their way to the station. Some police officers were positioned on the roof of the station as people continued toward the building.

Outside the station, protesters clashed with officers dressed in riot gear that included plastic facemasks and held plastic shields and batons that they occasionally used to push people back.

Evers meanwhile indicated an intention to further respond to the shooting.

“I have said all along that although we must offer our empathy, equally important is our action," he said. "In the coming days, we will demand just that of elected officials in our state who have failed to recognize the racism in our state and our country for far too long.”

The city of Kenosha is located on Lake Michigan, about 40 miles (64 kilometres) south of Milwaukee.

George Floyd, whose death energized a movement, to be buried

Botham Jean's mother on US protests: Frustrated voices must be heard