'Queen of Pie Corner' Ursula Caddle-Sobers, 104, is sassy like Rihanna 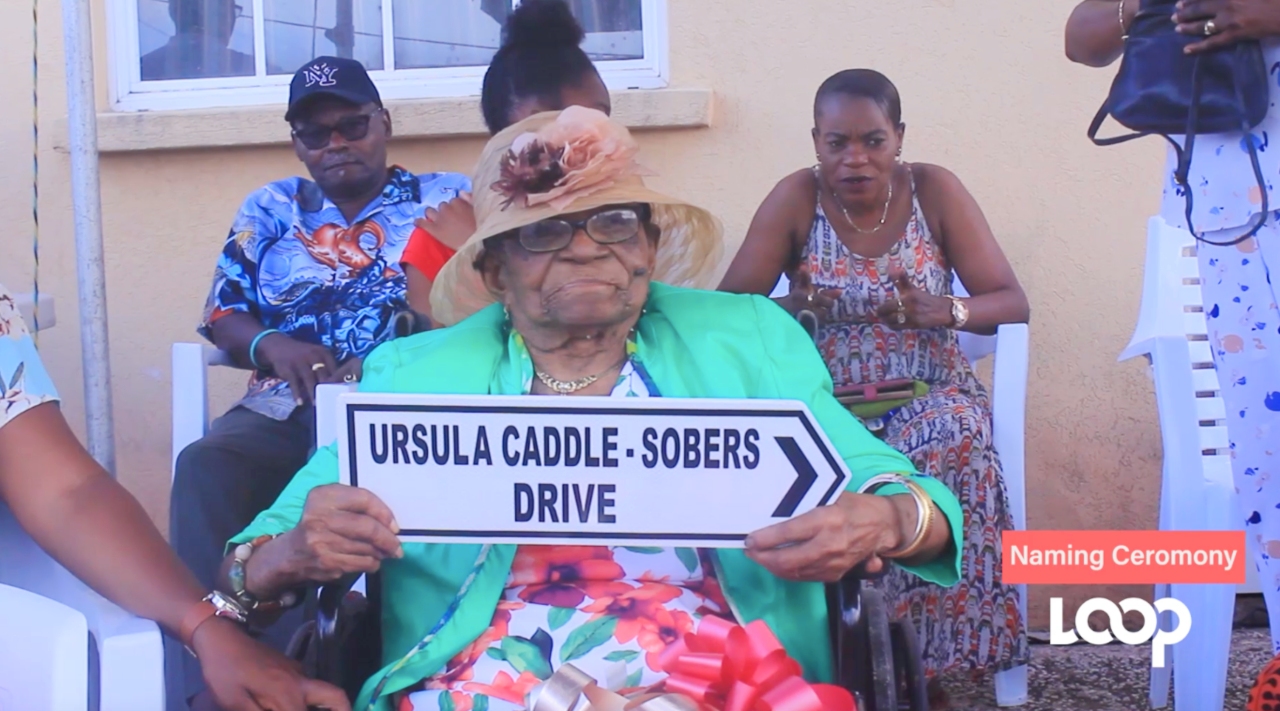 Ursula Caddle-Sobers was the talk of the town in Pie Corner last week.

Rihanna has a Drive and Ursula Caddle-Sobers got one too. "Is me and Rihanna!"

Recalling the conversation between her mother and brother which led to Rihanna Drive coming up, Mary Rock told Loop Lifestyle that after the Road Naming Ceremony on Saturday, October 13, and her 104th birthday on Sunday, October 14, her son Martin Sobers who came in from the United States said to her, "Mama de road named after yuh. Yuh got de road.

"She said to him, 'I ain't nuh mule, nor nuh donkey. I's a horse. I travelling. I travelling and de rest gotta catch up wid me. I's de queen uh de area now man'.

"She say, 'Is Rihanna and me. Rihanna got a road and Ursula Caddle got a road."

To which his mum quickly replied with her favourite phrase, "Yuh tink I's a ninkumpoop?"

Mary broke down with laughter sharing the exchange.

The Bajan superstar, Rihanna is also known as the Clapback Queen, and from the likes of Granny Ursula, she seems to be just as sharp with her mind and tongue too. They just may have more in common that their Drives.

Laughing, her daughter said she could tell many stories of her mum's quick wit.

She shared, "She's something else. The other day a lady came, one of our cousins but one that we never really knew, but she came to look for her. Mama say, 'Wait...wuh you look sweet enough'. She say, yeah? Mama say, "You got a husband?' She say, yeah. She say, 'Listen to me, listen to me carefully, yuh got he tie wid a rope?' She laugh. She say, 'Wuh if yuh got he tie wid a rope, untie he, caw yuh would never know when he left. Tie he wid a chain so that when he moving yuh gine hear ching-a-ling-ling-ling. De girl breakdown.

"I say, Mama wuh you talking tuh much. She say, 'No, I only talks to who I like!' Do wuh I tell you, don't mind she, caw you pretty, he wuh guh long and look fuh other girls and you would hear ching-a-ling-ling-ling."

Ursula may be the oldest person in the most Northern parish of this island but there's no pulling a fast one on her at all.

Here are 10 things you may not know about this spunky 104-year-old woman.

1) She is not on any medication at all.

4) "She's not miserable or fretful. She's nice and cool. And I'm not saying this cause she's my mum," said Mary.

5) She loves pork - pigtail with green pea rice, leg ham, pork, BBQ pigtails. "And I give her them all!"

6) She used to work in agriculture and she did needlework for her children.

7) She born and raised in St. Lucy. She was born in Back Sage Alley and then she moved closer to the bus route and the the main road to Harmony, and now she lives on Ursula Caddle-Sobers Drive. "I'm sooooo happy for her!"

8) "From the time that Peter [Phillips] was canvassing, he said when he held the meeting up by us [Pie Corner, St. Lucy], when he gets in he will name the road after her, cause she's the oldest person in St. Lucy and I really didn't think he would. I just thought he did it for notice because he's very young in that area and he knows that Pie Corner was DLP. So I figured he just used it for so, but he goes to church with me. He goes to my church Bennett Temple in Pie Corner."

9) She walks around at home. "She still moves around by herself and she feeds herself." On the day of the naming ceremony, Mary asked them to use a wheelchair.

10) Oh and what's her favourite thing to say? "She says all now, yuh think I's a ninkumpoop?"