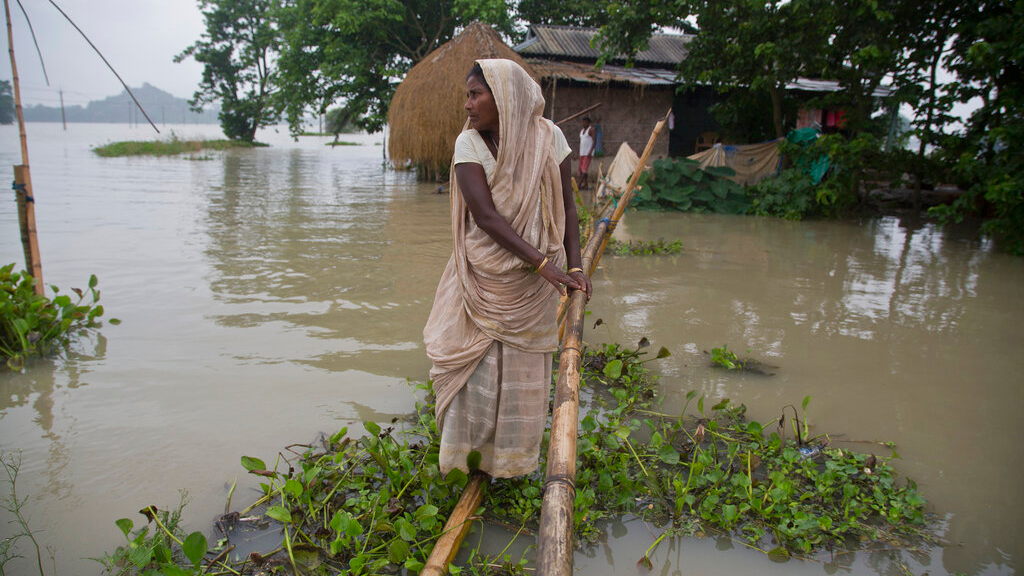 An Indian woman crosses flood waters in Mayong village east of Gauhati, India, Sunday, July 14, 2019. Officials in northeastern India said more than a dozen people were killed and over a million affected by flooding. Rain-triggered floods, mudslides and lightning have left a trail of destruction in other parts of South Asia. (AP Photo/Anupam Nath)

After causing flooding and landslides in Nepal, three rivers are overflowing in northeastern India and submerging parts of the region, killing at least 14 people and affecting the lives of more than 2 million, officials said Monday.

In remote northeastern India, 17 others were killed by flooding and mudslides and more than 2 million were affected by flooding in Assam and other states in the past four days, officials said.

Nearly 80% of Assam's Kaziranga National Park, home to the endangered one-horn rhinoceros, has been flooded by the mighty Brahmaputra river, which flows along the sanctuary, forest officer Jutika Borah said.

Six deer trying to move to higher ground were killed by speeding vehicles on a highway crossing the park, Borah said. Forest guards have been posted on the highway to provide a corridor for the animals.

Officials in Nepal said flooding and landslides killed at least 67 people there. They said 30 others are missing, either swept away by swollen rivers or buried by mudslides since monsoon rains began pounding the region on Friday.

The National Emergency Operation Center said 14 highways across the nation were blocked by floods or mudslides and attempts were being made to clear the debris and open them for traffic.

In Bangladesh, at least a dozen people, mostly farmers, have been killed by lightning since Saturday as monsoon rains battered parts of the low-lying country.

Bangladesh, with 160 million people and more than 130 rivers, is prone to monsoon floods because of overflowing rivers and the heavy onrush of water from upstream India.

Monsoon rains hit the region in June-September. The rains are crucial for rain-fed crops planted during the season.

Watch: 6 dead in storms and floods in southeastern China