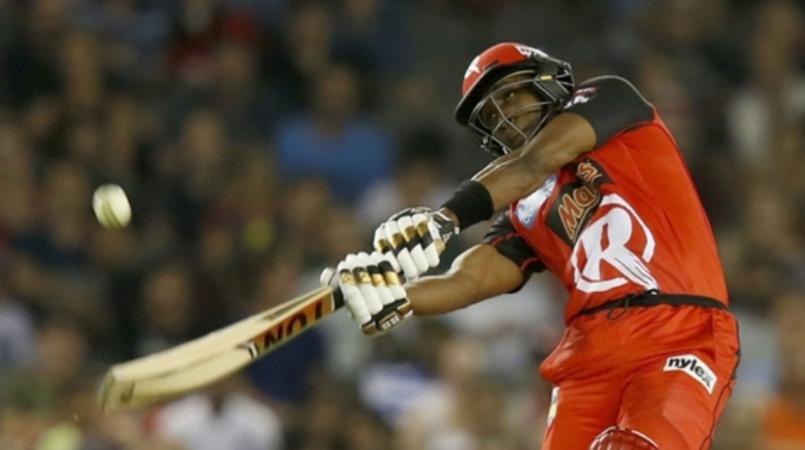 Denesh Ramdin hit a brilliant unbeaten half-century as the Trinbago Knight Riders handed the St Kitts and Nevis Stars their first defeat of the 2017 Hero CPL.

The Patriots, without an ill Evin Lewis, lost Chris Gayle early but still put up a challenging 158/7.

With the Knight Riders in truble at 89/5, Ramdin hit three sixes in his magnificent counterattacking innings (59 not out) to take his team to victory with three balls to spare.

The Patriots lost their unbeaten tag and the Knight Riders kept their hold of the top of the Hero CPL table.

The Patriots had an enforced change—Shamar Brooks came in for Lewis (illness), who scored a tournament-high 92 in their last victory over the St Lucia Stars.

The Knight Riders drew first blood when Narine induced an edge from Gayle (4) to Bravo at first slip.

Brooks played a composed 37, sharing an innings-best partnership of 38 with Mohammed Hafeez (13).

No other partnership went above 27 as the Knight Riders bowled well in blocks of overs, with the SKN Patriots breaking the shackles briefly.

The Knight Riders contributed 16 extras to the Patriots cause, inclusive of 11 wides.

The Patriots still managed to score 158/7, giving the highest TKR the highest score to chase for the 2017 season at the Oval.

The Knight Riders, however, successfully chased 153 against the Barbados Tridents on Saturday, and 156 against the Guyana Amazon Warriors on Friday.

However, by the 8th over Bravo’s team was in trouble at 42/3, with the Patriots spin pairing of Mohammed Nabi and Hafeez doing the early damage.

Narine (5) was caught off a Nabi off-cutter in the 2nd over, McCullum (16) holed out to midwicket to end the 5th over, and Darren Bravo (1) chipped a catch to cover.

With the scoring race plummeting, it was inevitable that wickets would fall.

Munro fell to an injudicious reverse sweep on 36 at 72/4 and Shadab Khan (3), in his last match for the TKR, was bowled by Badree.

Gayle reintroduced Hasan Ali and Carlos Brathwaite with 15 overs gone and the pair conceded 16 off the next two overs.

With the game slipping away, Bravo went on the attack in the 18th over, clobbering Ali over midwicket for a six.

Ali ran out Bravo for 20 and then Ramdin slashed the next delivery over backward point for another maximum.

With 22 needed off 12 balls, the odds were tilted slightly towards the Knight Riders.

New man Javon Searles smashed two sixes and Ramdin hit a third off Brathwaite in the 19th over and the Knight Riders needed only three runs in the last over.

Ramdin clinched their 5th win in six matches win with a straight boundary off the third ball of the last over.

The Patriots lost their first match of the Hero CPL 2017, while the Trinbago Knight Riders maintained their hold over the top spot in the six-team table.