Renovations to Geriatric Hospital under way 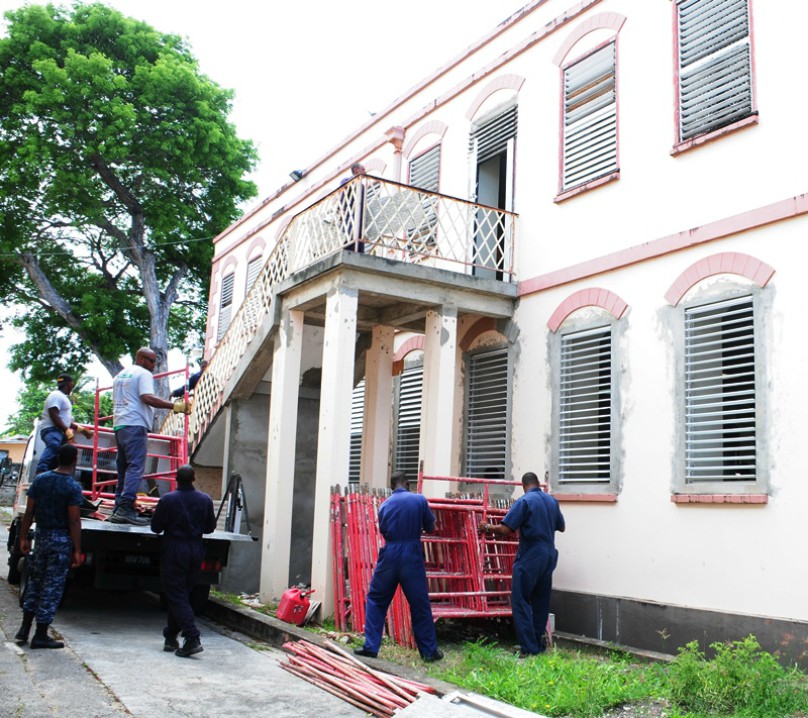 Members of the Barbados Defence Force start the rehabilitation project on the Geriatric Hospital. (B.Hinds/BGIS)

Members of the Barbados Defence Force (BDF) today began a five-month assignment at the Geriatric Hospital, Beckles Road, St. Michael, which will significantly upgrade the physical conditions for the 286 residents.

Hospital Manager, Heather Payne-Drakes, said that the BDF’s involvement in the project was facilitated by Minister of Health and Wellness, Lt. Col. Jeffrey Bostic, who is a former member of the BDF.

The rehabilitation work, she explained, was being carried throughout the hospital and would be done on a phased basis. The initial areas being impacted are Units 5A, 6B, 7B, 8B and the day care unit.

Mrs. Payne-Drakes welcomed “the fantastic partnership” between the hospital and the BDF, noting: “As you can see, the facility is quite dated. Right now we have some leakage, some windows that are out and some doors that are not functioning. We expect that at the end of the renovations the entire ambiance of the hospital will be transformed.

“We expect that it will be a lot more pleasant for the patients and staff; the colours will be changed and we will not have those environmental issues that accompany the deterioration of the plant,” she said.

Mrs. Payne-Drakes disclosed that to facilitate the work, some patients have had to be relocated to other sections of the hospital. She advised family and friends wishing to visit to contact the Nursing Administration Unit at 228-2579 so that they could be directed to the appropriate ward.

Major Lubin Maxwell, the BDF’s Building Rehabilitation Project Manager, is in charge of the work on site. He said his team of 18, including masons, plumbers, electricians, painters and general workers, was working with a team of artisans from the Ministry of Health and Wellness.

“The scope of work is to renovate and rehabilitate the wards, both internally and externally, with work on each block scheduled to last 20 weeks.”

Major Maxwell said that while the BDF officers would take a break to facilitate their involvement in the upcoming Remembrance Day and Independence Day Parades, the work will continue during that period with the artisans from the Ministry of Health and Wellness.

He said that the BDF officers were very appreciative of the contribution made to Barbados in the past by the elderly population and were honoured to be part of a project to improve their quality of life.