Reports on devastation in Dominica emerging 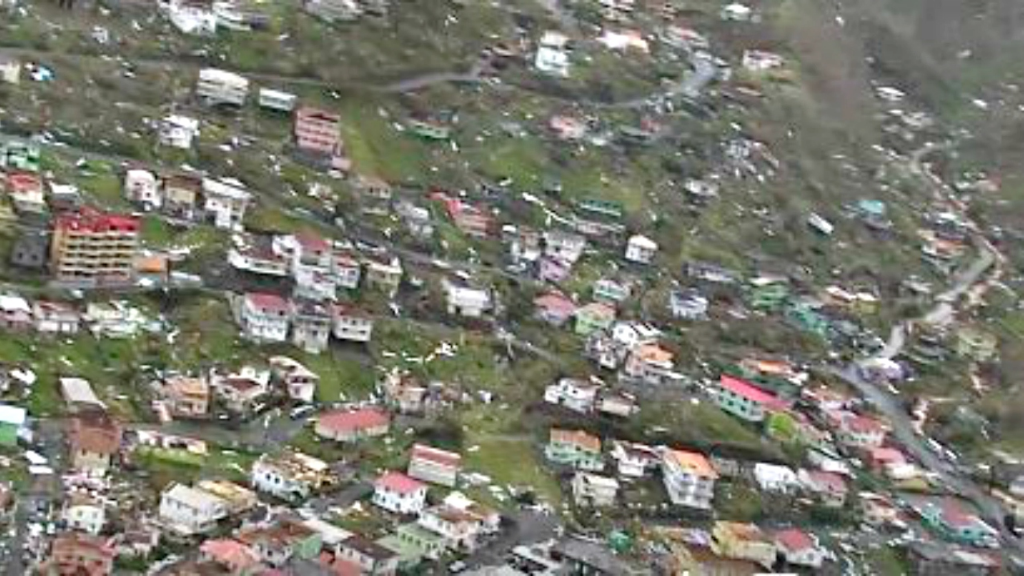 In the hours before disaster response teams could begin the journey by sea or air to Dominica on Tuesday, radio operators on the island and their peers around the world were able to get out communications to give an early picture of the state of the island after the passage of Hurricane Maria on monday night.

A Facebook page was set up to stream the communications to anxious family and friends desperate to hear news of loved ones on the island that was battered by Maria's Category Five winds and rains.

At the end of a long day, one of the page's administrators, Michelle Guenard, gave a summary of what was learnt from the amateur radio broadcasts.

She also confirmed that deaths had been confirmed, but did not give details. However, on Tuesday afternoon, CDEMA Executive Director, Ronald Jackson, told a press conference that preliminary reports from radio operators indicated there had been at least six deaths.

The first images of the destruction in Dominica started to come out last night, after a Regional Security System (RSS) flight returned from an aerial reconnaissance trip.

Other preliminary reports relayed through the radio network indicated that the aerial tour revealed significant damage to Marigot, Wesley, Layout and Laplaine. Roofs were off and homes appeared damaged in a number of areas including the environs of the Canefield airport, Portsmouth, Massacre, Grand Savanne and Morne Daniel. Areas such as Colihaut and Coulibistrie were said to have sustained a lot of water damage. However, the runway at the Melville Hall airport was said to be intact.

This morning a message was being widely circulated on social media, which was purportedly from PM Roosevelt Skerrit's Principal Advisor, Hartley Henry, giving an update on the state of Dominica after speaking with PM Skerrit by satellite phone this morning.

Loop News has not been able to verify the authenticity of the communication, which indicated that patient care had been compromised at the damaged hospital and the country is 'in a daze' with no electricity or running water. It added that all available public buildings were being used as shelters and communication via landline and cell phone was expected to be down for a while.

UPDATE [8 a.m.]: Hartley Henry gave a live interview on ABS TV/Radio at 7:45 a.m. confirming the information being circulated in the message.

The full communication is as follows:

Hi All!! This is Hartley Henry - Principal Advisor to Prime Minister Roosevelt Skerrit of Dominica.

It's 4 30am and I Just Spoke with Prime Minister Skerrit via Satellite phone. He and family are fine. Dominica is not!! Tremendous loss of Housing and Public buildings. The main general hospital took a beating. Patient care has been compromised. Many buildings serving as shelters lost roofs, which means that a very urgent need now is tarpaulins and other roofing materials. Little contact has been made with the outer communities but persons who walked 10 and 15 miles towards the city of Roseau from various outer districts report total destruction of homes, some roadways and crops.

Urgent helicopter services are needed to take food, water and tarpaulins to outer districts for shelter. Canefield airport can accommodate helicopter landings and it is expected that from today, the waters around the main Roseau port will be calm enough to accommodate vessels bringing relief supplies and other forms of assistance.

It's difficult to determine the level of fatalities but so far seven are confirmed, as a direct result of the hurricane. That figure, the Prime Minister fears, will rise as he wades his way into the rural communities today - Wednesday.

The urgent needs now are roofing materials for shelters, bedding supplies for hundreds stranded in or outside what's left of their homes and food and water drops for residents of outlying districts inaccessible at the moment.

The tarmac at Mellville Hall was not too badly damaged so the strip should be opened in a day or two for larger relief planes to land. The Prime Minister is hoping to make contact with ABS Radio in Antigua this morning to speak directly to the outer world as to the state of Dominica and its urgent needs.

The country is in a daze - no electricity, no running water -as a result of uprooted pipes in most communities and definitely to landline or cellphone services on island and that will be for quite a while.

In summary, the island has been devastated. The housing stock significantly damaged or destroyed. All available public buildings are being used as shelters; with very limited roofing materials evident. The country needs the support and continued help and prayers of all. Will update further as new information is received. HHH