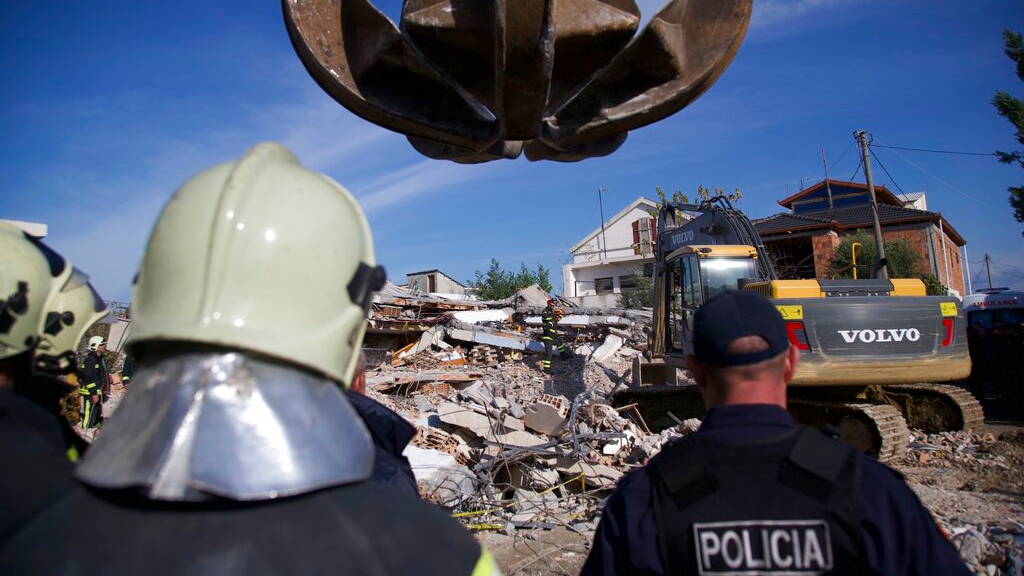 Rescuers search a damaged building in Durres, western Albania, November 27, 2019. The death toll from a powerful earthquake in Albania has risen to 25 overnight as local and international rescue crews continue to search collapsed buildings for survivors. (AP Photo/Visar Kryeziu)

Stopping at intervals to listen for the sounds of survivors, local and international rescue crews searched through the rubble of collapsed buildings Wednesday, a day after a deadly earthquake in Albania killed at least 25 people and injured more than 650.

Among those desperate for news was police officer Ajet Peci, who managed to emerge from the ruins of an apartment block that collapsed in the port city of Durres, killing his two adult daughters. His wife is still missing.

“How can I live?” Peci said, sobbing as he was consoled by neighbours, a bandage under his right eye and on a finger of his left hand. “I don’t know what I did to make it out. I wish I had stayed with them.”

Neighbours said only about four or five families were living in the five-story building at the time of the quake, as the owners of some of the apartments had emigrated.

Overnight, authorities said four more people had been confirmed dead, raising the death toll to 25, while more than 650 people were injured in the magnitude-6.4 quake that struck the country’s coastal cities.

In Durres, Albania’s second largest city, on the Adriatic Sea, residents slept in tents and cars and at a soccer stadium as powerful aftershocks from the earthquake continued. Others spent the night on open ground, huddling around fires to stay warm.

Rescuers continued to comb the rubble of a four-story villa that housed an extended family, looking for potential survivors. Locals said they believed about six people might still be in the collapsed structure.

Flags were flying at half-staff on public buildings around the country Wednesday as Albania observed a national day of mourning.

“We feel good to not be alone and I’m very grateful to all our friends,” Rama said late Tuesday, visiting Durres with Greek Foreign Minister Nikos Dendias.

Rescue teams and other disaster experts arrived from more than a dozen countries including France, Italy, Greece, Romania, Turkey, Serbia, and the United States.

In the nearby town of Thumane, Kristina Margjini also spent the night outdoors.

"The quake left us without shelter. Everything we have is destroyed: The apartment, windows, everything, and we cannot live there anymore," she said.

The quake in Albania Tuesday was followed by a smaller one in nearby southern Bosnia and a 6.1 magnitude temblor Wednesday off the coast of the island of Crete in Greece. No significant damage or injuries were reported from either quake.