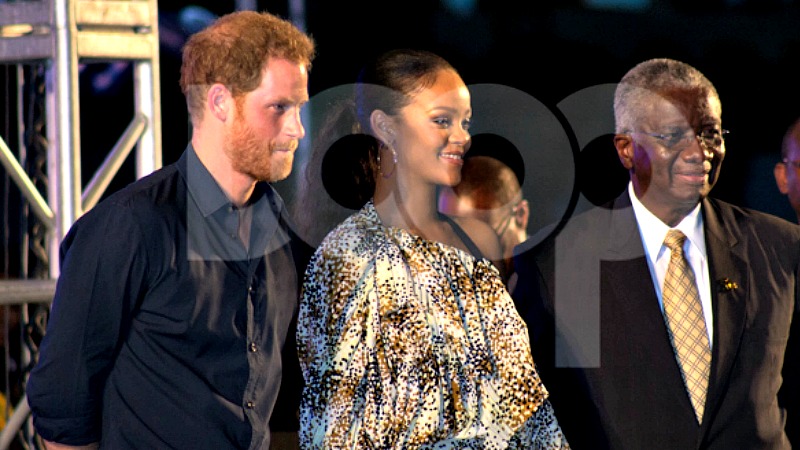 Bajan international superstar Rihanna put to bed all rumours that she would not be in attendance at the Golden Jubilee Mega Concert at Kensington Oval tonight, but those who came to hear her sing left disappointed.

The Barbados National Youth Choir opened the show just after 9:30 p.m. with the first verse and chorus of the National Anthem. Though Rihanna was not upfront and centre on the mic, she could be seen singing along to the choir flanked by Prince Harry, Prime Minister Freundel Stuart and Senator Maxine McClean.

Nevertheless, the crowd, several thousand strong, erupted in a loud cheer when she took the stage and cheered even louder when the Anthem was over.

Prime Minister Freundel Stuart delivered brief remarks where he told the audience, “You are the best advertisement that Barbados is in fact [celebrating] 50 years'.

A grateful Stuart thanked Barbadians profusely for the strength of character and maturity they have displayed over the last 50 years, noting the country is in good hands for the next 50 years.

Prince Harry's presence at the Mega Concert was well received by the audience, evident in the grand applause from the crowd.

In his remarks, he congratulated Barbadians on the achievements they have made over the last 50 years.

The Prince spoke on the issue of climate change and speaking directly to the youth of Barbados, urged them to be proactive in seeking out solutions to the problems affecting small island developing states.

Noting that there were amazing role models to be found throughout the Caribbean region, Prince Harry introduced the crowd to one such young Barbadian role model, Jamilla Sealy, an environmentalist, who was today announced as a recipient of a 2017 Queen's Young Leader Award.

Also in attendance at the Mega Concert is the President of Guyana, David Granger and his wife.

The concert is slated to run until 1 a.m. and will feature gospel, soca and cultural performances spanning several decades of Barbados’ cultural history.

UPDATE: The concert ultimately finished around 3 a.m. with stellar performances from a slew of Barbadian artistes. However, many still left disappointed that Rihanna didn't sing the National Anthem, as originally announced by organisers last month, and never returned to the stage - even during the segment paying tribute to her with some of her biggest hits.