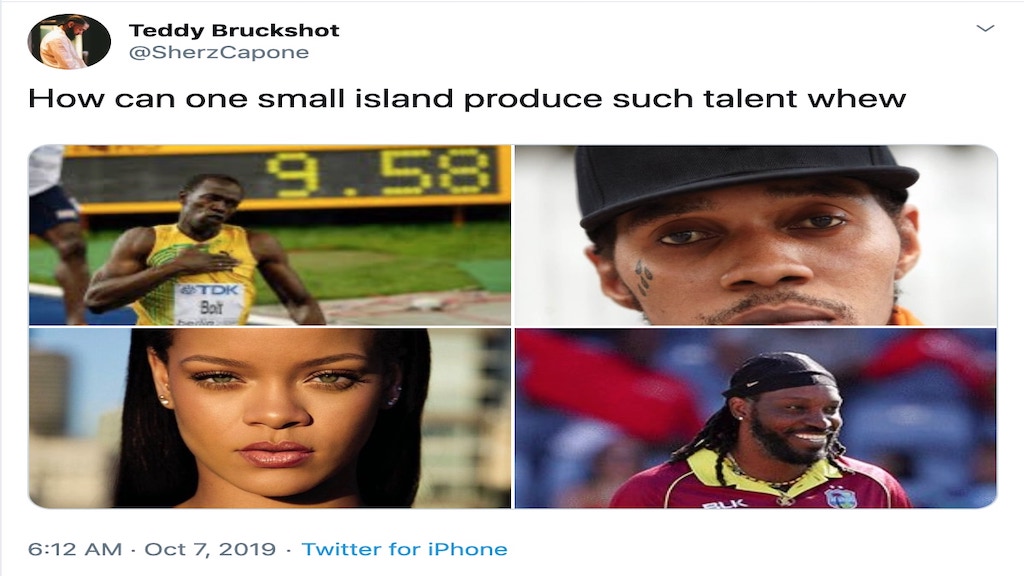 This week shots were fired across the Port Bow of the ship “Bajan”, one of the vessels in the Rihanna Navy. Undaunted, the crew guided their assault, and fired a series of proverbial volleys off the port beam and has been engaged in battle ever since.
What are we going on about?

The ongoing Twitter war that is currently raging between Barbados and Jamaica over Rihanna's citizenship. In case you are not clued in, goggle the hashtag, #rihannaisjamaican.

One Jamaican @davideatsviagra got it going on with the tweet: “Jamaicans, you know, if we pretend like Rihanna is Jamaican, the world would believe us and there is nothing the Bajans can do about it. Let’s kidnap Rihanna’s nationality, y’all.”


And the volleys would make The Clapback Queen proud, to say the least.

Take this one from where Scotch Bonnet Negro (@jelaniakilw) told her Jamaican crew “if anybody contests her nationality whip this out y’all” with a screenshot of the Ri-Ri’s Wikipedia page and doctored it a bit.

But one comment that had many in stitches in this “war” was the one from Lord Petyr Bae-Less (@avi552):

“Few people know this but Barbados and Jamaica were once bitter enemies. Blood flowed freely as marauding forces battled fiercely.

Two babies were exchanged in a truce. The Jamaican baby was Rihanna. And the Bajan baby: Her birth name is Grace Hamilton.
#Rihannaisjamaican”

LOOP Lifestyle was oh so tempted to have a look-see into this, however, the clap backs from the Bajan Navy were coming fast and furious.

His comment: "Vybz Kartel with his past Prime Minister then heading to BRIDGETOWN in a ZR"

Another, Roronoa (@badxnicki) took it this a bit further. “One of Barbados national heroes. #Bajan #Worldboss”.

Obsidian (@Bjovian_) took it further “I remember when he used to sell sno cones in town” and Bajan Bully (@Rxme_116) reminisced “Kartel definitely graduated from Parkinson".

But not to be undaunted, the Jamaicans took it up a notch, telling the Bajan Twitter to behave.

Some said the whole hashtag spoke to what true unity was all about.

Xavier Murphy (@xaviermurphyja) “Fun and Joke aside. The #RihannaIsJamaican is a powerful display of unity. Can you imagine the impact this type of #unity could have to affect positive changes? #JamaicanTwitter”

And there were those Barbadians that tried to give some reasoning about why the feud was ongoing.

Cheyne Jones (@cheynejoness) tweeted: The confusion comes because Rihanna could be anywhere in the world at any given time so nationality might be blurry to some who don't know better….”

And though it is unlike that Rihanna (@rihanna) will clap back one has gotta ask a question.  What is Guyana take on this whole debate?

Rihanna has no problem talking US politics, Super Bowl with Vogue