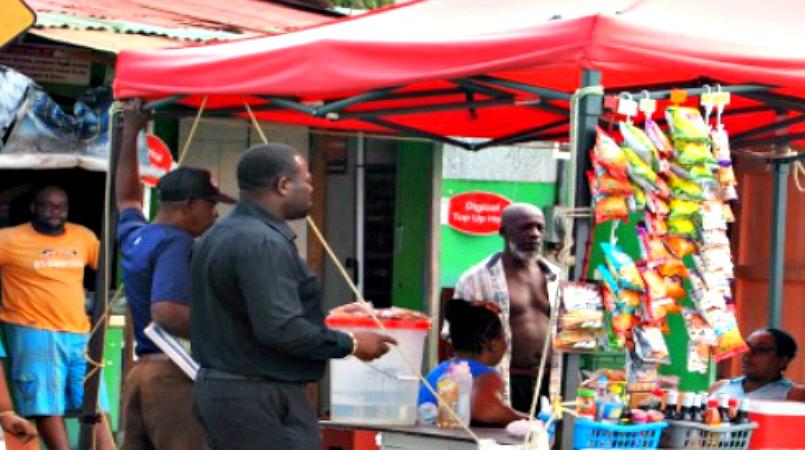 Owners of stalls along the south perimeter wall in the River Terminal were given a deadline of January 3, 2017 to relocate as part of the Constitution River Terminal Development Project undertaken by the Ministry of Transport and Works.

Up to today progress has been slow to move vendors out of the space as Loop News understands there seems to be contention between some stall owners and the Director of Barbados Transport Authority, Alex Linton over the selected new location. This would place them nearer to the pedestrian bridge linking the van stand to River Road, where fruit and other food vendors currently ply their trade.

Loop News spoke to owner of Ron’s Barber Shop, Ronald Knight, who described the relocation as "unreasonable" since stall owners are being given no financial assistance for the relocation process.

“This is 20 years now that I have been here and them telling we that we have to move but them ain’t giving we no money to move. This structure just can’t pick apart just so. I am going to have look to build something else, call Light and Power to get it rewired and all of that. That going to take me about six weeks and all that time I won’t be making no money. That is unreasonable, man.”

Knight also said he does not mind moving but the space to which they are being relocated is already overcrowded and filled with "rowdies". He also said the owners of stalls around him have expressed similar concerns.

“To be honest I don’t mind moving you know. But all we want is a comfortable space. How them expect to put we down there and so many stalls already down there? And all down there is a big bunch of rowdies smoking and drinking.”

Further into the River Terminal the contention continued as stall owner Pamela Walrond came to high words with Linton over the tent she had erected in front of her stall. Walrond said the reason why she decided to leave her stall and erect the tent on the outside is to reach more customers.

“He come down here and tell me that I have to move so that somebody else could come here. But how he expect to come and bring another food business and put right here in front my food stall? Some days I out here whole day and nobody don’t come through here. That is why I come out on the road to get the people. So if another food stall come there you know what that mean for me? No money! Police going have to lock me up 'cause I not moving and I done tell he so.”

Another vendor in the area, who declined to give his name said there are some vendors who are operating without a permit and making the van stand "miserable" or were choosing to rent out their stalls to tenants - a practice which is illegal. He also said there needs to be a crackdown on those operating illegally and those who are holding more than one permit.

Linton declined to comment on precisely how much more time vendors will be given to relocate or what type of action will be taken only saying, "We will help them to move.”