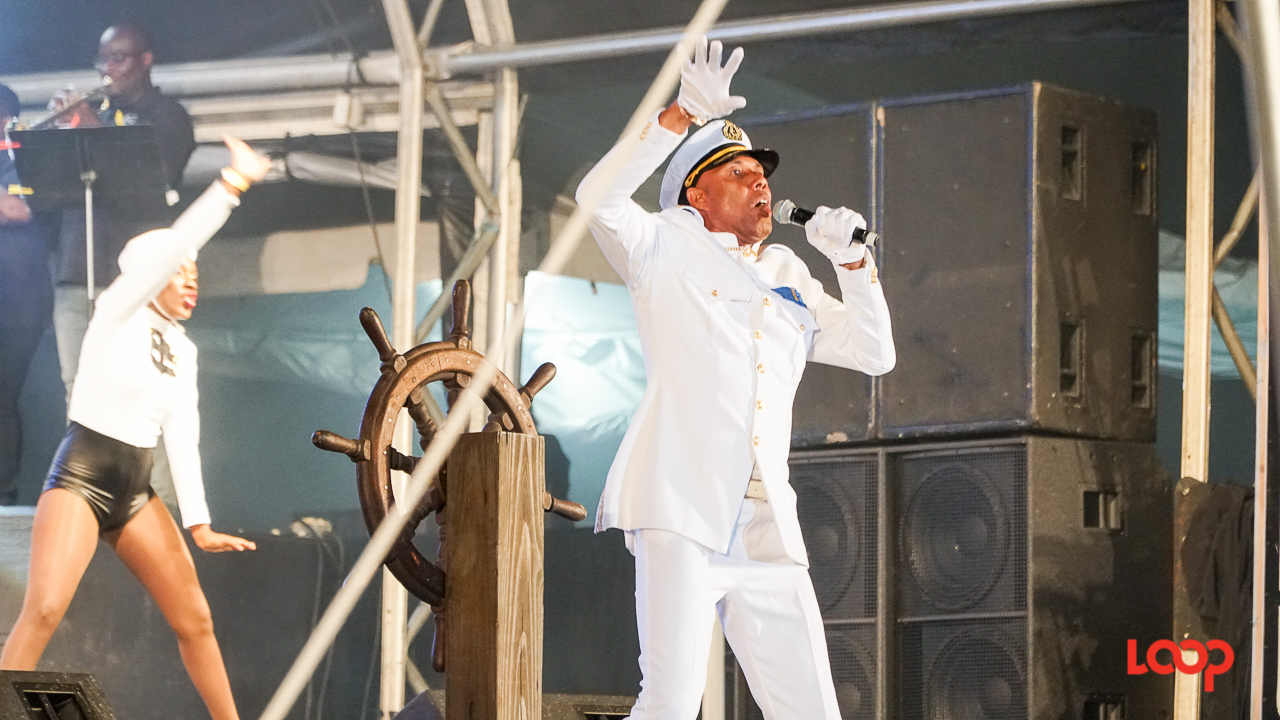 RPB has won the Sweet Soca competition at the 2017 Soca Royale.

The top four contestants in the Party Monarch were:

Red Plastic Bag (RPB) blew his Sweet Soca competitors out of the water when it came to crowd response.

Taking the stage in the eighth position and fashioning himself as the Admiral of a Landship, RPB had the tens of thousands following his every command as they rocked left, right, forward and back on his Boat Ride.

With crowd response only accounting for five points, RPB still had to impress the judges with his presentation, performance, melody, arrangement and lyrics – and he did. His Landship presentation spoke to Barbadiana and played in well to the lyrics of a song which issues several commands to the audience. The cleverly written song also hints at Barbados’ economic woes and with RPB staying within his vocal range, he let the popular song ride its own wave of good arrangement and melody all the way to the top spot.

Other artistes that got the crowd moving from the pit to the hills of Bushy Park were Marzville and Lil Rick.

Marzville showcased his vocal abilities as he crooned to the crowd that he wanted to ‘Give It To Ya’ and they sang along with his every word. The infectious groove of his song was the first to really get the crowd moving and those sitting got to their feet. They did the same when Lil Rick came to give his ‘Blessing’ as he went down Crop Over memory lane. Although he may have fallen down in his vocals, which were not as in tune as RPB’s or as smooth as Marzville’s, Rick was able to make up for it in other categories and landed third place.

The few points assigned to the Crowd Response category continues to cause some upset for patrons when a crowd favourite does not place highly. This was the case for Marzville, who placed fourth with a points tally that trailed well behind third place. When MC Mac Fingall made the announcement, an upset crowd shouted their disagreement.

Related article :Have faith in the judging system, says NCF

Nonetheless, Marzville may not have been too fazed. He told Loop News he did not focus on the judging criteria but instead came out to give the crowd a great performance, simply saying, “I came out to enjoy myself and to sing for the people. The people enjoyed themselves so I’m very happy.”

Nikita was hoping for a top four finish and would no doubt be happy to know her second pick song entry earned her second place. Admitting that her first pick ‘Same Way’ was denied entry to the competition after the now-resolved controversy surrounding song ownership, she was nonetheless proud of her song,' Carry Festival', and the message she was able to deliver on stage.

The CARIFESTA XIII Ambassador told Loop News, “I really wanted people to get close to who we are as a Caribbean people. We come from different islands but there’s one string of cohesion and that’s our people…I love growing up Caribbean; I love growing up Bajan.”

Meanwhile, TC started the Sweet Soca competition with a beautiful representation of a tropical Paradise and got the crowd moving right off the bat. She told Loop News, “Tonight was just awesome – no matter what happens, I feel really good about tonight. Everything just came together.”

Shaquille gave an impressive performance and he told Loop having the crowd sing along with him was his crowning achievement.

“This year my aim was to have a song people would love and would sing with me,” he told Loop News. “It’s always nice to enter competition to get the exposure. This song really put me out there to show not just my singing ability, but also my writing ability. That was my aim – to really show my talent some more.”

Saying that he has set progressive goals of making it to the Soca Royale stage, then having a hit song, Shaquille added, “It’s a great feeling. I always set goals going forward and I always believe you speak things into existence.”

Sanctuary was another who was pleased with his performance of ‘Pick Me Up’, saying he was thankful for the response he got from the audience, who he left with an important message. He noted, “I know I’m singing an alcohol song but I still want people to drink responsibly and not overdo it.”

Unfortunately, things did not run that smoothly for the defending monarch, Edwin. His performance of Winners Circle paled in comparison to the masterful performance that earned him the crown in 2016.

He told Loop News, “Tonight was difficult on stage for me. I’m not usually someone who complains about these things but…it was difficult for me because I had no monitors whatsoever so I had to stay in the small area that I was in order to stay in time. So from that standpoint, I wasn’t pleased, but at the end of the day, it’s competition and it will happen at times. It was just my draw.”

Marvay too had a difficult task in coming after RPB in the final position and, unfortunately, missed the mark with an ambitious arrangement that became chaotic at times. While he was able to show off his vocal ability, he sounded off-key at some points and did not win the crowd over after RPB’s electrifying performance.

Nonetheless, it was clear a lot of thought went into his presentation for ‘Antidote’. He explained to Loop, “I really wanted to show there’s a celebration in the sadness. There’s a very thin line between crying and laughing. Antidote is about overcoming something [difficult] that will still be there tomorrow and to know that you are still alive right now and to give yourself a chance and to feel good.”

Feeling good is RPB who has been crowned the 2017 Sweet Soca Monarch.

While the crowd who stayed to hear the results was displeased with Marzville’s placement, they were nonetheless overjoyed to hear of RPB’s win, judging from the loud roar of approval that rang out in Bushy Park when results were announced around 12:20 a.m.

The judges’ decision coincided with a poll of Loop readers, who had also pegged RPB to take home the crown. 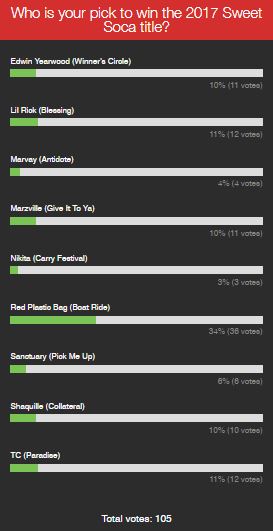