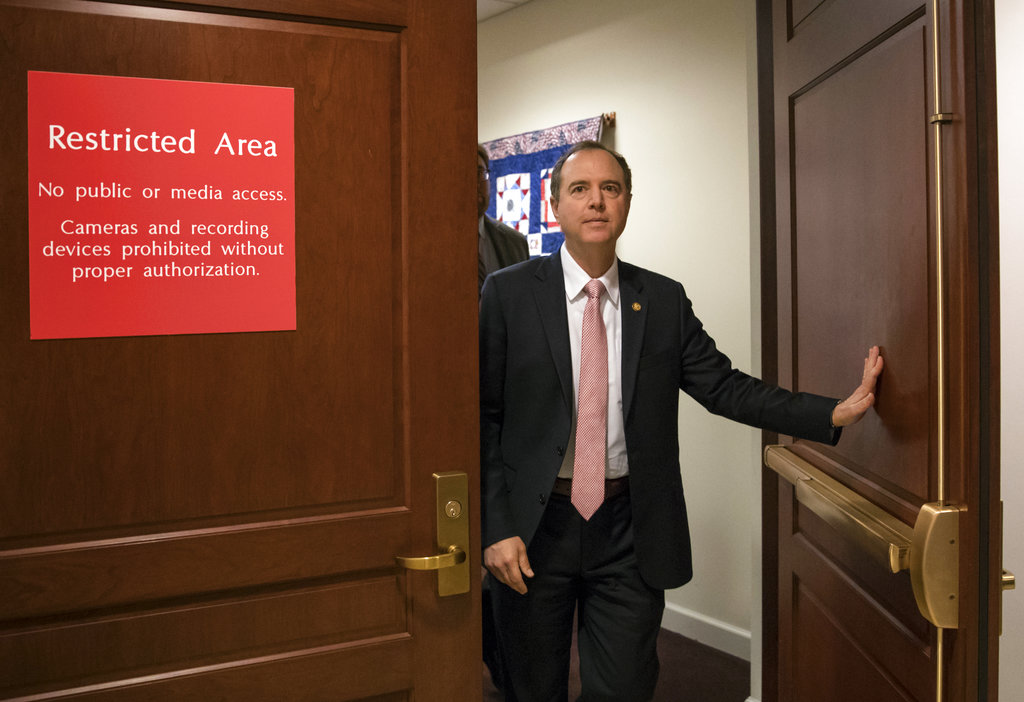 House Democrats are expected to reopen the investigation into Russian interference in the 2016 election if they win the majority in November. But they would have to be selective in what they investigate.

California Rep. Adam Schiff, the top Democrat on the House intelligence panel, has said his party would have to "ruthlessly prioritize the most important matters first."

The Republican-led Intelligence Committee was the only House panel to investigate Russian meddling, and its investigation is now closed. Republicans say they found no evidence of collusion between Russia and President Donald Trump's campaign.

Democrats say Republicans ignored key facts and important witnesses and want to restart parts of the investigation if they win the House. But some Democrats also worry that there could be a political cost if they overreach.

Schiff and other lawmakers say they are closely watching special counsel Robert Mueller's Russia investigation and the Senate's Russia probe to look for gaps that they could fill. And if Mueller issues any findings, their investigative plans could change.

"My sense is that we want to be precise," says California Rep. Eric Swalwell, a Democratic member of the intelligence panel.

Here's a look at what Democrats are likely to investigate if they take the House majority.

Schiff has repeatedly said a priority for Democrats would be investigating whether Russians used laundered money for transactions with the Trump Organization.

Trump's businesses have benefited from Russian investment over the years. Schiff said he wants to know whether "this is the leverage that the Russians have" over Trump.

Other committees might also want to look into money laundering, including the House Financial Services panel.

It's unclear whether Mueller is probing money laundering related to the president's business.

The Democrats issued a list in March of several dozen people whom the committee hadn't yet interviewed when the Russia investigation was shut down. Democrats would want to call in some — but probably not all — of those witnesses. Former Trump campaign advisers Michael Flynn, Paul Manafort, Rick Gates, and George Papadopoulos are among them. They all pleaded guilty to various charges in the Mueller probe and have cooperated with prosecutors.

Important witnesses whose credibility Democrats have questioned might also be called back. That includes Trump's former personal lawyer, Michael Cohen, who pleaded guilty in federal court in August to campaign-finance violations and other charges, and prominent Trump supporter Erik Prince, who met with Russians during the campaign. Prince was defiant in an interview with the intelligence panel in December.

"I believe there are those who were less than candid with us," says Illinois Rep. Mike Quigley, a Democratic member of the committee, referring to Cohen and Prince, among others.

Democrats have said they also want additional documents that Republicans refused to subpoena.

House Republicans limited their Russia investigation to the intelligence panel, which traditionally conducts most of its business in secret. Democrats would probably spread the investigation over several other committees, opening it up and allowing for public hearings with top Trump officials.

Texas Rep. Joaquin Castro, a Democratic member of the intelligence panel, says they would try to be more transparent. The Republican investigation was "a way to keep everything behind closed doors," he said.

Democrats would also push to provide interview transcripts to Mueller, a step Republicans had resisted. The committee recently voted to make most of its Russia transcripts public, but it's unclear when that will happen.

Democrats have pushed for more information about the president's son, Donald Trump Jr., and communications with his father and other aides related to a June 2016 meeting between Trump campaign officials and a Russian lawyer.

According to phone records he provided to Congress, Trump Jr. had a call with a blocked number several days before the meeting took place; he said he didn't recall with whom. Democrats want to subpoena additional phone records because Trump Jr. has insisted he didn't alert his father to the meeting beforehand. They also want more information about his communications with former Trump communications aide Hope Hicks.

Democrats in the majority would probably push for the release of Trump's tax returns, a task that would be up to the House Ways and Means Committee. Trump broke a decadeslong tradition by declining to release his returns during the campaign. The Republican House and Senate have declined to ask for them.

Lawmakers hope that access to Trump's taxes would reveal information about his financial entanglements with other countries, among other things. But getting them may not be easy. The tax-writing committees in Congress can obtain tax records from the IRS under the law, but it is possible the Trump administration would refuse to hand them over, prompting a court fight.

Since Republicans closed the Russia investigation earlier this year, Democrats on the intelligence panel have conducted some of their own investigations despite not having subpoena power. They have made some progress in probing Cambridge Analytica, a data analytics firm once employed by the Trump campaign that improperly gained access to data from millions of social media profiles. They have also investigated Republican operative Peter W. Smith, who worked to obtain Democrat Hillary Clinton's emails from Russian hackers, according to The Wall Street Journal. Smith died shortly after talking to the paper.

A Democratic House would probably try to move legislation to protect special counsel Mueller. Trump has repeatedly criticized Mueller and his investigation, calling it a witch hunt. Prompted by concerns that Trump may try to fire Mueller, the GOP-led Senate Judiciary Committee approved legislation in April that would give any special counsel a 10-day window to seek expedited judicial review of a firing. The bill would put into law existing Justice Department regulations that a special counsel can only be fired for good cause.

Senate Majority Leader Mitch McConnell has refused to take up the bill in the Senate. But House Democrats would be expected to pass their own special counsel protection bill if they take the majority.

Russian prime minister warns US against ramping up sanctions

12 Russians accused of hacking Democrats in 2016 US election