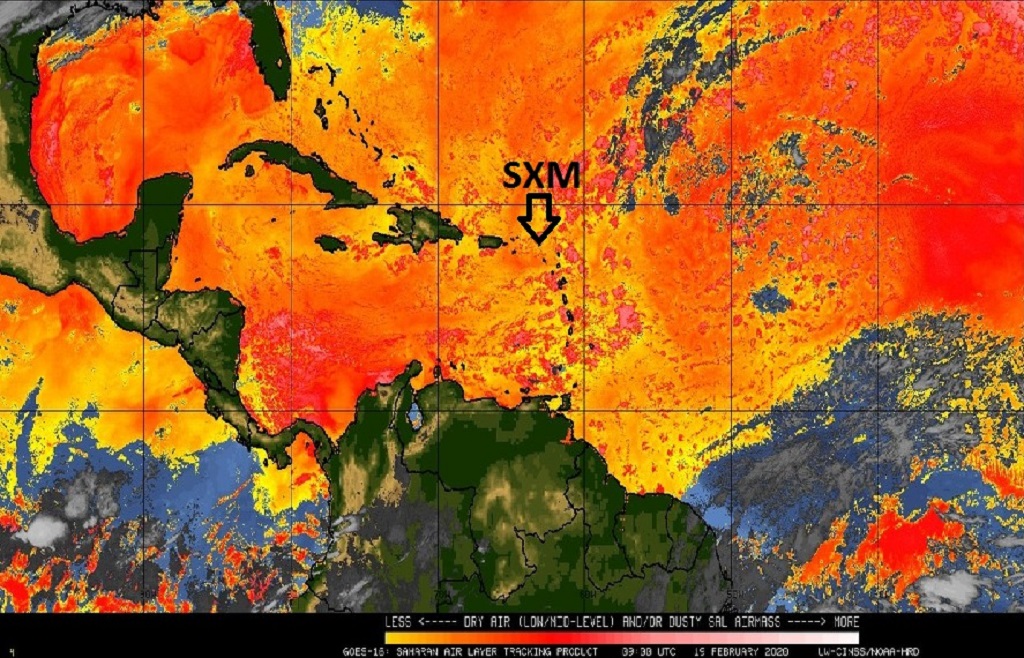 If you are coughing or suffering from itchy eyes, then you are probably feeling the effects of the Saharan dust.

Several Caribbean countries have warned their nationals to take health precautions as a large plume of Saharan dust has made its way across the Atlantic Ocean to the region.

Barbados Met Office issued a notice to put citizens and tourists on alert early, since February 17, 2020.

The Meteorological Department of St Maarten warns that higher concentrations of the Saharan dust plume is expected to pass through the country on February 20. It says according to Dust Prediction Models hazy skies can be expected during the next several days with varying concentrations.

Persons in St Maarten with allergies and/or respiratory illnesses have been advised to take the necessary precautions.

Meanwhile, St Vincent and the Grenadines Meteorological Service issued a 72-hour weather outlook indicating that haze intrusion is forecast to thicken across the country from February 19, with improvement likely around February 21.

It notes the haze intrusion is due to the progression of a thick concentration of Saharan dust haze located in the central Atlantic.

The Vincy Ministry of Wellness, Health and the Environment has advised its population that particles contained within the Saharan dust haze could cause the following health effects:

SVG’s Health Ministry notes that the health impact of the Saharan dust haze will differ due to the sensitivity of individuals and the amount of exposure.

High concentrations of the Saharan dust may worsen illness in persons with respiratory diseases such as asthma and persons with pre-existing heart disease.

The Ministry says the elderly and children are also vulnerable at this time and should limit their exposure to the Saharan dust by staying indoors when possible.

Vulnerable groups should also have the necessary medication, including asthma inhalers with them always.

In addition, the T&T Meteorological Office has also warned that the dust event is expected to last a week, but fluctuations in concentration is expected within that time.

It states data from the Environmental Management Authority (EMA) shows that the air quality over T&T ranges from moderate to unhealthy for sensitive groups.