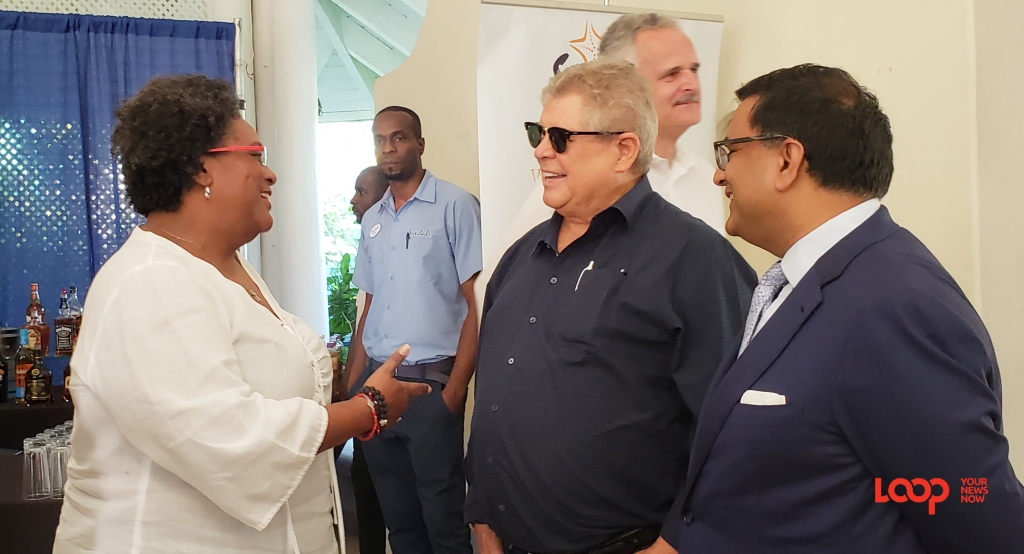 The fact that some tourism players have to renew their applications for food and beverage duty-free concessions every two to three weeks, is not fair in the eyes of Prime Minister Mia Mottley.

Therefore, she has announced that plans are afoot to right this practice speedily.

The Prime Minister seemingly had a closed-door meeting with the Chairman of Sandals Resorts and Beaches Resorts Gordon 'Butch' Stewart ahead of a site visit in Heywoods, St. Peter, on Friday, October 26, 2017.

However, she reiterated in her address at the site which will house the largest project in Barbados' construction history - Beaches Barbados, that, "...We are conscious that our goal must be to create that fair and transparent environment and immediately I can say that for those persons in the Barbados hotel sector who now currently have to go every two to three weeks to get their renewal from the Ministry of Tourism, I have indicated to the Minister of Tourism that that is unacceptable and that they should be equally allowed the same benefits that Sandals has now with respect to that which they are already enjoying but only getting if they send somebody in a car, to drive up to the Ministry of Tourism, wait and hope that somebody will write out a form, wait and hope that the Minister will sign it amidst all of his other duties, collect the form and take it back down the road.

"Now if ever that was an unfair and an unfortunate set of circumstances, I have asked for that to be put on the backburner, and those who are now benefiting should be able to benefit by order of the same way that Sandals is benefiting."

Not surprised by the disclosure, clapping loudly in the front row of the audience was Stewart.

Cognisant of the contractual obligations made to Sandals by the previous administration, the Prime Minister looked to the Chair and also assured him and his team that this administration will continue to ensure that Barbados is a country that does not depart from law, she said that her government accept the obligations and "abides by the rule of law".

But she stressed for others in the tourism field to breath a sigh of relief. She committed, "we want however to be able to allow as many hotels as our fiscal circumstances allow to enjoy the exact benefits that Sandals does, whether that takes six months, twelve months or 18 or 24 months." She urged, "we feel it is important!" Admitting it is not fully possible now, she reminded that we are coming out of "the most difficult and most awful economic circumstance that this country" has ever faced.

The Prime Minister and Minister of Finance herself added, "If we can remove much of the cost that otherwise inhibit the competitiveness of this product while at the same time ensuring that there is a way in which to spread burden," they will act to do so and level the playing field."

To persons questioning the move, she gave the assurance that with her party, "what you see is what you get... We need to work together to make the best." In regard to relooking at the sweep of concessions afforded to some, not just the renewal process, she admitted that we cannot fiscally afford that yet.

Sandals Beaches is expected to break ground in January 2019, and take two years to build. That would be bring the total number of Sandals properties on island to three. Barbados already has Sandals Resorts and Sandals Resorts. Barbados Beaches is to be called 'Beaches at Speightstown' according to the Prime Minister.