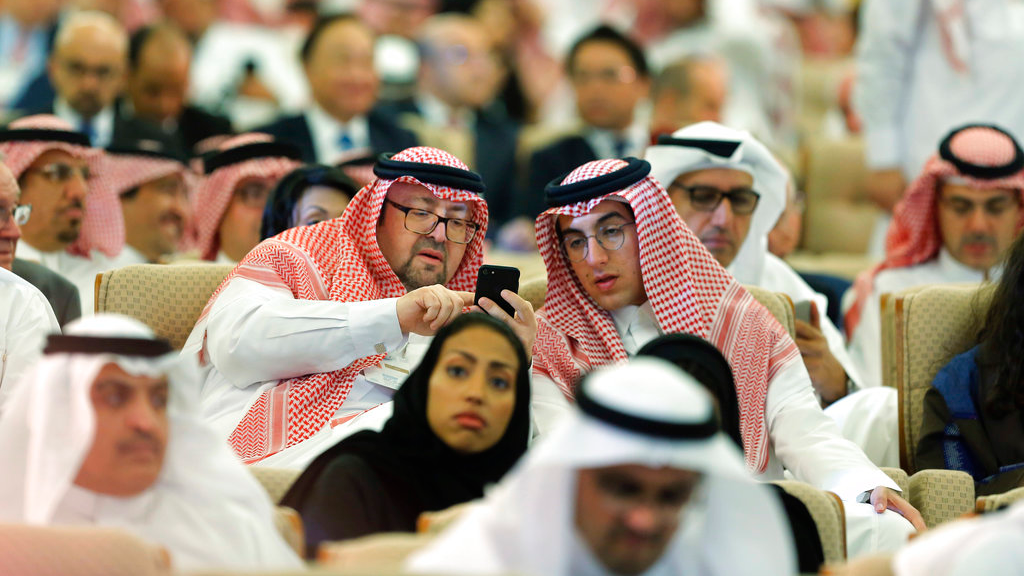 A high-profile economic forum in Saudi Arabia began on Tuesday in Riyadh, the kingdom's first major event on the world stage since the killing of writer Jamal Khashoggi at the Saudi Consulate in Istanbul earlier this month.

Khashoggi's death loomed large over the Future Investment Initiative forum and coincided with Turkish President Recip Tayyip Erdogan's claim Tuesday that Saudi officials murdered Khashoggi in their consulate after plotting his death for days. The Turkish leader demanded the kingdom reveal the identities of all involved in the killing, regardless of rank.

Saudi Arabia, which for weeks maintained Khashoggi had left the consulate, on Saturday acknowledged he was killed there in a "fistfight." Turkish media and officials say a 15-member Saudi team was flown in to kill Khashoggi and accosted the writer in the consulate, cutting off his fingers before killing and dismembering the 59-year-old Washington Post columnist who wrote critically about Saudi Crown Prince Mohammed bin Salman.

As the Riyadh conference opened, Saudi Energy Minister Khalid Al-Falih described the killing as "abhorrent" in his speech.

The forum kicked off without some of its keynote speakers after numerous Western executives and officials cancelled plans to attend over Khashoggi's Oct. 2 slaying.

"As we all know, these are difficult days for us in the kingdom of Saudi Arabia," Al-Falih said to attendees seated in the forum's ornate hall.

"Nobody in the kingdom can justify it or explain it. From the leadership on down, we're very upset at what has happened," he added, referring to Khashoggi's slaying.

The forum is the brainchild of Prince Mohammed and is aimed at drawing more foreign investment into the kingdom to help create desperately needed jobs for millions of young Saudis entering the workforce in the coming years.

International pressure is mounting against the prince, who did not attend the start of forum. Critics suspect the powerful crown prince ordered Khashoggi's killing or at the least had knowledge of it.

Despite the absence of key executives and speakers from the United States and other Western partners, some $50 billion in deals were signed Tuesday at the forum with Russian and Asian businesses and officials eager to do business with the kingdom.

"Those partners who are here with us today to continue that journey with us are certainly going to look back and find out ... how committed the kingdom is to its partners that stay the course," Al-Falih said, just moments before several deals were inked on stage.

The forum last year grabbed headlines when Prince Mohammed wowed the crowd of global business titans with pledges to lead the ultraconservative kingdom toward "moderate Islam." He also announced plans to build a $500 billion futuristic city in the desert.

Schwarzman is among those who've backed out of attending this year. Others include U.S. Treasury Secretary Steven Mnuchin, who met with Prince Mohammed separately before the forum, according to Saudi state television.

Among its many investments domestically and abroad, Saudi Arabia's sovereign wealth fund, which the crown prince oversees, has invested $20 billion in a U.S.-focused infrastructure fund with Blackstone.

"As we gather here in Riyadh this morning, it is natural that our thoughts tend to focus on recent events surrounding the death of Jamal Khashoggi — a writer, a journalist and a Saudi journalist known to many of us," said. "May he rest in peace."

She added that such "terrible acts ... are alien to our culture and DNA." Some in the crowd applauded her remarks.

"I think this conference will open the gateways to Asian and Russian investment in the Saudi economy regardless, irrespective if the crisis gets resolved or not," said Ayham Kamel of Eurasia Group.

Man linked to Saudi prince at consulate when writer vanished