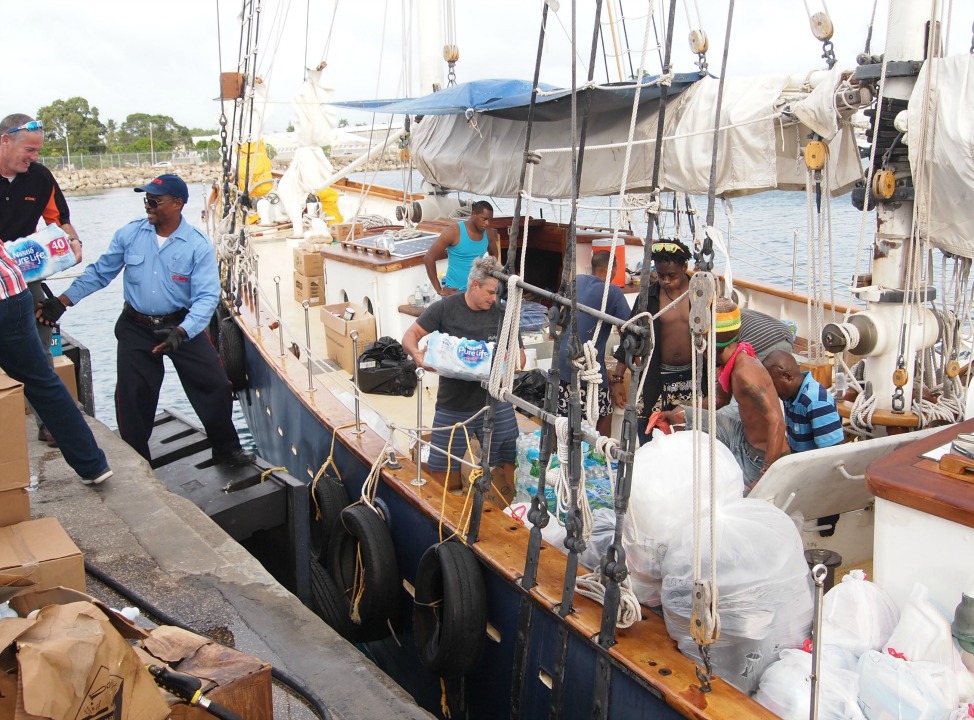 Relief supplies being packed onto the Schooner Ruth on Monday afternoon.

Businessmen and women, public servants and ordinary Barbadians came out on Monday evening to assist in loading hurricane supplies onto the Schooner Ruth vessel which is scheduled to head to Anguilla on Tuesday morning.

When Loop News visited the docking port on Spring Garden Highway this afternoon many were hard at work sorting supplies which included many cases of bottled water, dry food goods such as pasta, snacks, baby food items and toiletries.

Anguilla is one of the islands that was ravaged by Hurricane Irma last week leaving one person dead and extensive infrastructural damage.

According to CDEMA's impact report issued on Sunday, Anguilla has reported one death due to Hurricane Irma. There has been damage to 90 percent of the electricity infrastructure, significant damage to the main water supply and 90 per cent of government buildings have been destroyed.

Captain of Schooner Ruth, Gerrit Scheper, told Loop News that, weather permitting, the team consisting of 10 crew members will be sailing on Tuesday morning up to the British territory.

He explained the sailing course will take three days and the vessel is expected to arrive sometime on Friday. He said they also have to keep a watchful eye out for Hurricane Jose which is still in the Atlantic Ocean but continues to weaken as it heads in a northeastern direction.

Captain Scheper said the initial goal was to make multiple stops in the Leeward Islands but that has been altered to visiting only one island for now, noting, “I’m afraid we can’t feed a million people so we can only do Anguilla right now.”

He said the distribution of the supplies will be handled by the Government of Anguilla and the Caribbean Department of Emergency Management Agency (CDEMA) and from there the crew will come straight back to Barbados.

The experienced sailor said at present he has not made plans to carry out more supplies but he is pleased to be able to lend his vessel to the relief effort.

“This just started out as a call to my family. This is what this boat was built for - Schooner Ruth is the ambassador of sail. Our normal work is that we teach young guys to be sailors and we take some guest crew as well too.”

Over the weekend, it was announced a package of £32m (US$42m) would be sent for the relief effort in the British territories of Anguilla, British Virgin Islands and Turks & Caicos. In addition, the Caribbean Development Bank has granted Anguilla US$200,000 towards relief efforts.

The Governor's Office in Anguilla said in a statement today that while Government aims to have critical sector services such as tourism, health and education functional within the next six months, due to the extensive damage sustained to utilities and buildings such as electricity, it may take approximately two to three years to return to a state of normalcy.