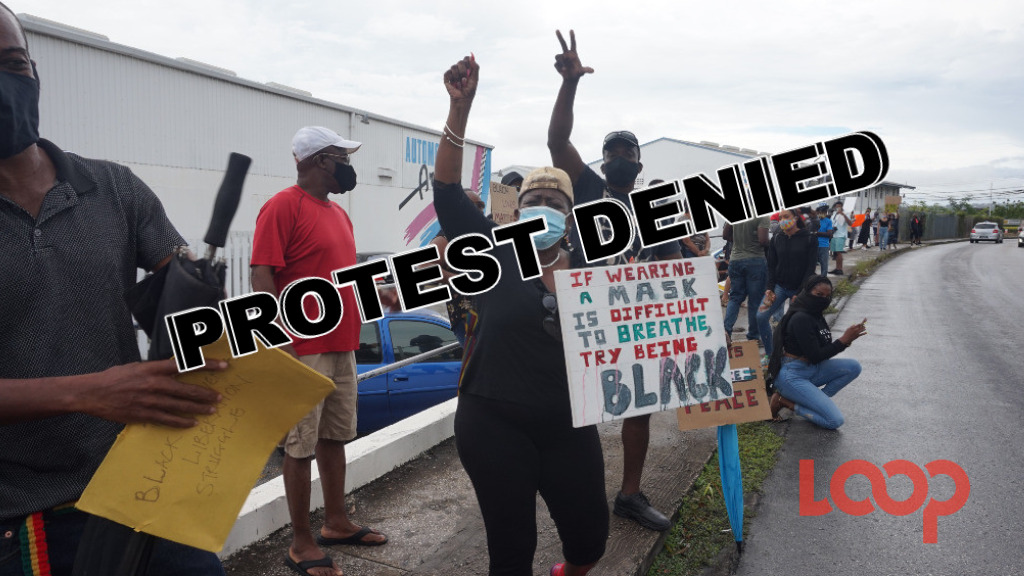 Protesters along the highway in Wildey waiting for the first Black Saturday protest to commence on June 6. (FILE)

The General Secretary of the Caribbean Movement for Peace and Integration, who announced earlier that he had reached out to the Attorney General, has received official permission to go forward with the planned protest.

A second protest against racism has been brought to a halt while still in its planning stages.

Today David Denny announced in a press conference that the second planned solidarity protest that was set for June 13, has not been approved by the relevant authorities.

Denny told the media that the Caribbean Movement for Peace and Integration (CMPI) applied to the Royal Barbados Police Force (RBPF) for permission to conduct a peaceful protest and march to show solidarity with the protesters in the United States of America, the United Kingdom, Europe, Australia and the Caribbean. Protesters the world over are pushing back against racial oppression and the killing of black people by police.

In his letter to the RBPF, Denny detailed the proposed action intended. In addition to the march, there were to be speeches and performances to demonstrate solidarity. 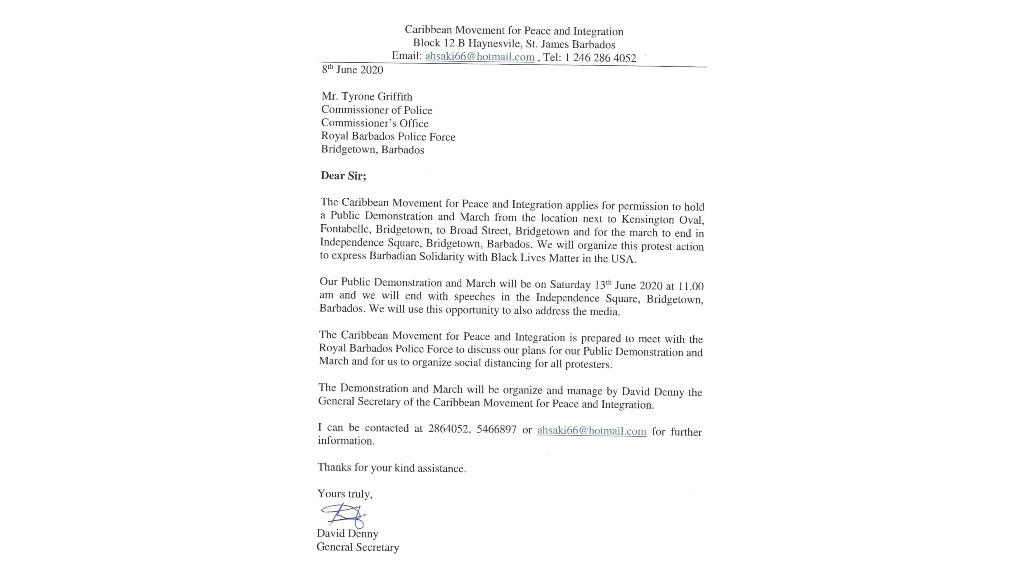 "The Caribbean Movement for Peace and Integration applies for permission to hold a public demonstration and march from the location next to Kensington Oval, Fontabelle, Bridgetown, to Broad Street, Bridgetown, for the march to end in Independence Square, Bridgetown, Barbados. We will organize the protest action to express solidarity with Black Lives Matter in the USA." Denny wrote.

However, Denny disclosed that he has received a letter of correspondence from The Commissioner of Police in reply stating that the proposed protest would be in breach of the protocols announced for the prevention of the spread of COVID-19 and therefore would not be allowed to take place. 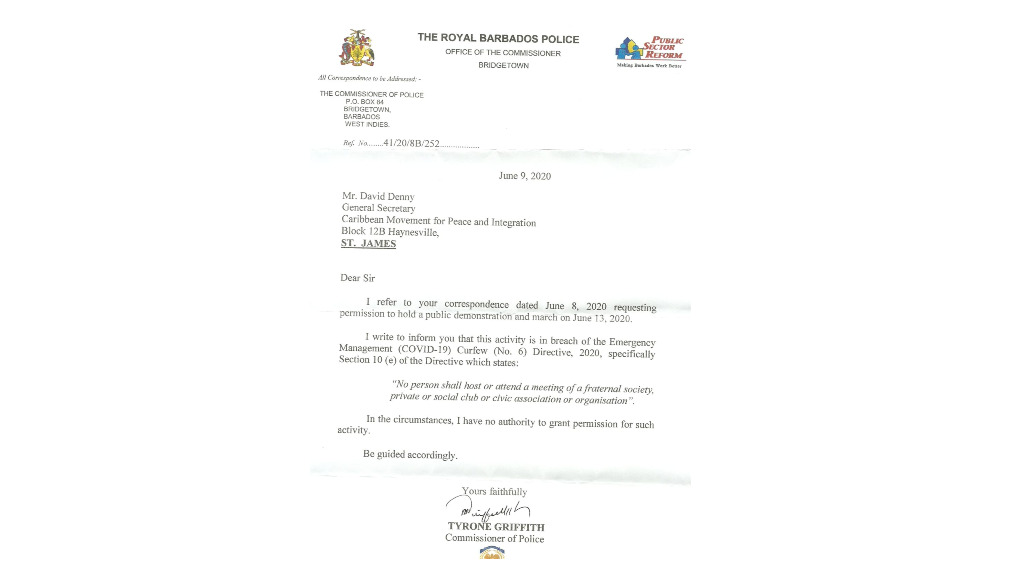 "I write to inform you that this activity is in breach of Emergency Management (COVID-19) Curfew (No. 6) Directive, 2020, specifically Section 10 (e) of the Directive which states:

'No person shall host or attend a meeting of a fraternal society, private or social club or civic association or organization'

"In the circumstances, I have no authority to grant you permission for such activity."

Denny has said that as of now, the CMPI will be investigating other actions that will allow them to go forward with their protest as well as pushing back against what he says is Barbados becoming "a police state".

"We are going all out to fight this battle against Barbados being declared a police state. We are going to do whatever it takes to fight this battle and defend our people and give them the right to protest and to show solidarity with the people of the United States of America. What this letter from the Commissioner of Police is saying is that we do not have the right to freedom of association. That is a God-given right!" Denny said.

Denny then went on to ask Barbadians to wear black this Friday (June 12) as a symbol of association with the Black Lives Matter movement.

"The Caribbean Movement for Peace and Integration are [sic] calling on you to wear black on Friday 12th June and to demonstrate your solidarity... with the movement for Black Lives Matter. Ladies and gentlemen, friends, and comrades, forward ever, backward never. Long live the African Revolution,"  the CMPI General Secretary stated.

The previous protest organised by CMPI as well on June 6 was to be held on the grounds of the United States Embassy to Barbados in Wildey, but it was shut down when the RBPF informed Denny that the agreed-upon action had been misinterpreted and ultimately was revoked. The protesters only lined up on the outskirts of the Embassy before police instructed persons to disperse.

Were they worth it?: Key protest movements over the decades