Senate GOP rallies behind McConnell in feud with Trump 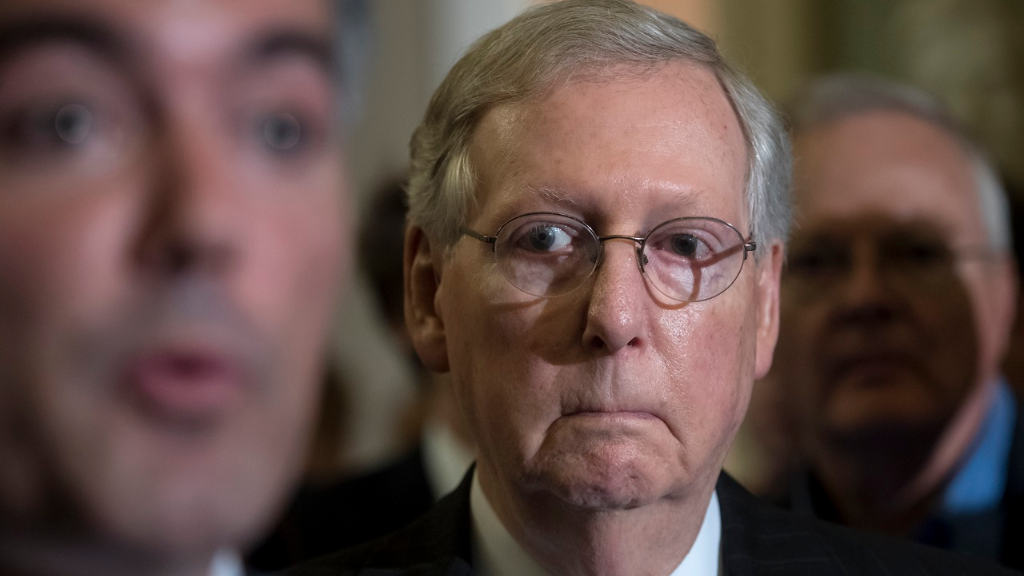 Senate Republicans on Friday rallied in support of Majority Leader Mitch McConnell, pushing back against the onslaught of criticism from President Donald Trump.

Republicans took to Twitter, their president's preferred means of communication, to praise McConnell as a gifted leader backed by his 52-member caucus and a Republican intent on delivering for the president and the party on taxes and budget this fall.

A number of GOP lawmakers pointedly reminded Trump and other GOP critics that it was McConnell who ensured the confirmation of Supreme Court Justice Neil Gorsuch.

"Passing POTUS's legislative agenda requires a team effort. No one is more qualified than Mitch McConnell to lead Senate in that effort," tweeted Texas Sen. John Cornyn, the No. 2 Republican in the Senate.

A sitting president openly turning on a Senate majority leader of his own party in such a fashion is practically unheard of — yet another norm toppled since Trump's emergence onto the political scene.

And while the fighting words might elate Trump's core supporters, they can only hurt broader Republican efforts to move major legislation this fall on taxes and spending while preparing for congressional elections next year against energized Democrats who are rallying to retake the House. Republicans control both chambers, but the Trump factor in many races will be hard to predict.

Trump launched a barrage of criticism at McConnell over the collapse of the seven-year GOP campaign to repeal and replace Barack Obama's Affordable Care Act and even suggested on Thursday that the Kentucky Republican might have to rethink his future as leader if he doesn't deliver on the president legislative lineup.

On Friday, Trump retweeted headlines from "Fox & Friends" about his verbal assault on McConnell and possible fallout for GOP senators who criticize the president.

There was no immediate response from McConnell's office.

Trump's comments came after he spent two days slamming McConnell on Twitter, writing Thursday morning that after "screaming" about repealing and replacing Obamacare for seven years, McConnell "couldn't get it done." Several hours later, the president's tone took a seemingly motivational turn as he exhorted McConnell to "get back to work" and pass bills. "You can do it!"

McConnell clearly had struck a nerve by telling an audience in his home state that Trump had "not been in this line of work before" and had "excessive expectations about how quickly things happen in the democratic process."

What followed was a "tense" phone call between the two men, according to a person familiar with the exchange, and then a presidential Twitter screed. The person was not authorized to speak publicly about a private discussion and spoke on condition of anonymity.

The presidential megaphone amplified the McConnell-bashing that's been snaking through conservative media: Breitbart News, Fox News' Sean Hannity and radio host Rush Limbaugh are among those who have vilified the leader after the Senate's failure on health care. They represent a segment of the Republican electorate, including some major donors, who are out to punish what they see as a "do-nothing Congress" that has hampered the president's work.

McConnell is "a coward who leads from behind," ''spineless," and a lifelong "political animal" of the sort Trump wants to eject from Washington, said Doug Deason, a major donor based in Texas. Deason said he decided months ago not to give money to any Republicans up for re-election next year unless they can pass Trump's priorities.

In the past, Republicans have praised McConnell who refused to even allow a hearing for Democratic President Barack Obama's Supreme Court nominee, Merrick Garland, and kept the seat vacant for more than a year as he awaited the presidential election results.

Trump and his supporters love such political brawls, and the McConnell tussle potentially shores up the president's base at a time when it is showing signs of weakening support. After all, he is picking on a part of government with lower approval ratings. But other Republicans saw Trump's moves as counterproductive.

Even Newt Gingrich, a Trump backer and informal adviser who formerly served as speaker of the House, criticized the dispute.

"You saw Mitch McConnell say something, you saw Trump say something, when it's obviously better for them to learn not to do that," Gingrich said. "They have to work together. Governing is a team sport."