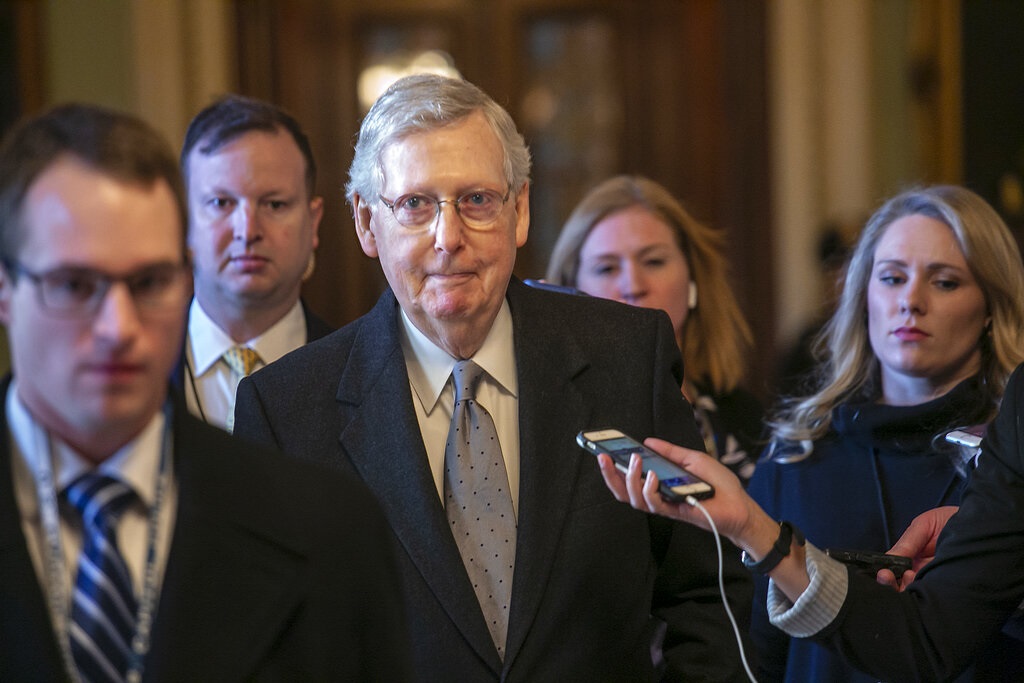 Senate leaders on Tuesday agreed to vote on duelling proposals to reopen shuttered federal agencies this week, forcing a political reckoning for senators grappling with the longest shutdown in U.S. history: Side with President Donald Trump or vote to temporarily end the shutdown and keep negotiating.

Senate Majority Leader Mitch McConnell, R-Ky. set up the two showdown votes for Thursday, a day before some 800,000 federal workers are due to miss a second paycheck. One vote will be on his own measure, which reflects Trump's offer to trade border wall funding for temporary protections for some immigrants. It was quickly rejected by Democrats. The second vote is set for a bill approved by the Democratic-controlled House reopening government through Feb. 8, with no wall money, to give bargainers time to talk.

Both measures are expected fall short of the 60 votes need to pass, leaving little hope they represent the clear path out of the mess. But the plan represents the first test of Senate Republicans' resolve behind Trump's insistence that agencies remain closed until Congress approves $5.7 billion to build a wall on the U.S.-Mexico border. For Democrats, the votes will show whether there are any cracks in the so-far unified rejection of Trump's demand.

Senate Minority Leader Chuck Schumer, D-N.Y., said the GOP plan's immigration proposals were "even more radical" than their past positions. "The president's proposal is just wrapping paper on the same partisan package and hostage-taking tactics," offering to temporarily restore programs Trump himself tried to end in exchange for wall funding, Schumer said.

McConnell accused Democrats of preferring "political combat with the president" to resolving the 32-day partial federal shutdown. He said Democrats were prepared to abandon federal workers, migrants and all Americans "just to extend this run of political theatre so they can look like champions of the so-called resistance" against Trump.

The confrontational tone underscored that there remained no clear end in sight to the closure. Amid cascading tales of civil servants facing increasingly dire financial tribulations from the longest federal shutdown in history, the Senate chaplain nudged his flock.

"As hundreds of thousands of federal workers brace for another painful payday, remind our lawmakers they can ease the pain," Chaplain Barry Black intoned as the Senate convened.

The planned vote on the Democratic plan marked a departure for McConnell, who had vowed to allow no votes on shutdown measures unless Trump would sign them.

The White House views its latest offer as a test of whether Democratic leaders can hold their members together in opposition, said a person familiar with White House thinking who was not authorized to speak publicly. The administration also wants to show they are willing to negotiate, hoping it will push more blame onto Democrats, who are opposing negotiations until the government reopens. Public polls show Trump is taking the brunt of the blame from voters so far.

"How long are they going to continue to be obstructionists and not solve the problem and not reopen the government?" White House spokeswoman Sarah Huckabee Sanders said of Democrats.

As the stalemate ground on, Alaska Airlines said the closure would cause at least a three-week delay in its plan to start new passenger flights from Everett, Washington. Lawrence Yun, chief economist for the National Association of Realtors, said the shutdown could slow home sales by 1 percent in coming months. And a restaurant in Red Bank, New Jersey, owned by musician Jon Bon Jovi joined the list of establishments serving free meals to furloughed federal workers.

McConnell's bill largely reflects the proposal Trump described to the nation in a brief address Saturday. It would reopen federal agencies, revamp immigration laws and provide $5.7 billion to start building his prized border wall with Mexico — a project Democrats consider an ineffective, wasteful monument to a ridiculous Trump campaign promise.

The measure would provide a three-year extension of protections against deportation for 700,000 people covered by the Delayed Action for Childhood Arrivals program, or DACA. Democrats want far more to be protected — Trump last year proposed extending the safeguards to 1.8 million people, including many who'd not yet applied — and want the program's coverage for so-called "Dreamers" to be permanent.

Trump has tried terminating the Obama-era DACA program, which shields people brought to the U.S. illegally as children, but has been blocked so far by federal judges.

The GOP bill would revive, for three years, protections for people from El Salvador, Haiti, Honduras and Nicaragua who fled natural disasters or violence in their countries. Trump has ended that Temporary Protected Status program for those and several other countries.

Republicans estimated the proposal would let 325,000 people remain in the U.S. But the GOP proposal contains new curbs, providing those protections only to those who are already in the U.S. legally and who earn at least 125 percent of the federal poverty limit.

The bill would also, for the first time, require minors seeking asylum from Guatemala, Honduras and El Salvador to process their applications at facilities the State Department is to establish in several Central American countries. Other new conditions include a limit of 15,000 of these minors who could be granted asylum. Currently, many asylum seekers apply as they're entering the U.S. and can remain here as judges decide their request, which can take several years.

As a sweetener, the Republican measure also contains $12.7 billion for regions hit by hurricanes, wildfires and other disasters. The Democratic bill also includes the disaster aid.

One White House official said Trump was open to counter-offers from Democrats. The official, who spoke on condition of anonymity to discuss private conversations, said Trump was also willing to use his proposed temporary extensions for "Dreamers" as a way to seek a long-term deal.

The official said Trump would be willing to seek at least permanent legal status for "Dreamers," but probably not a path to citizenship.

Democrats have refused to negotiate until Trump reopens the government. Trump is worried Democrats won't agree to a wall compromise if he relents, while Democrats say Trump would use the shutdown tactic again if it works.

From travel to IPOs, how shutdown is upsetting US economy