Senator Crystal Haynes has come to the defense of her colleague following an uproar in the Upper House.

In the post-lunch session, Opposition and Independent senators walked out after Senator Lisa Cummins arrived at the Chamber citing an inadequate quarantine period after she was ordered to self-quarantine.

"If she was indeed positive...her PCR test, which is the gold standard test...which is 99% accurate would have become positive anywhere between two and six days following exposure," Senator Haynes said.

Senator Cummins had originally been ordered to self-quarantine as a precautionary measure after being in proximity to the Ghanaian nursing party at a welcoming ceremony at the Grantley Adams International Airport (GAIA) last Thursday (July 30). Nine of the nurses tested positive for COVID-19 subsequently. Their results were announced two days later (August 1).

"The matter of fact is that we have a member of this House who has been cleared by no less than the Chief Medical Officer, who has a COVID-19 negative test and she should be allowed to join us in the Chamber this afternoon Mr President," Senator Dr Haynes said.

Senator Dr Haynes even took to social media to voice her support for her colleague.

"If there is anyone in this Chamber who with any certainty doesn't have COVID-19, it is Lisa. #EndCovidStigma #CovidNegative" Senator Haynes stated. 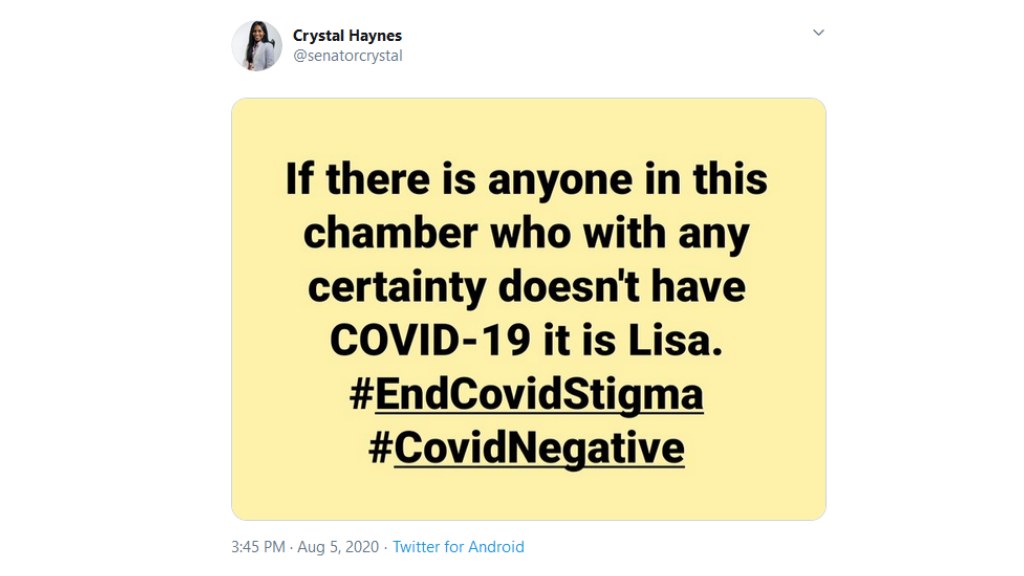 This is the last sitting of the Senate before prorogation.