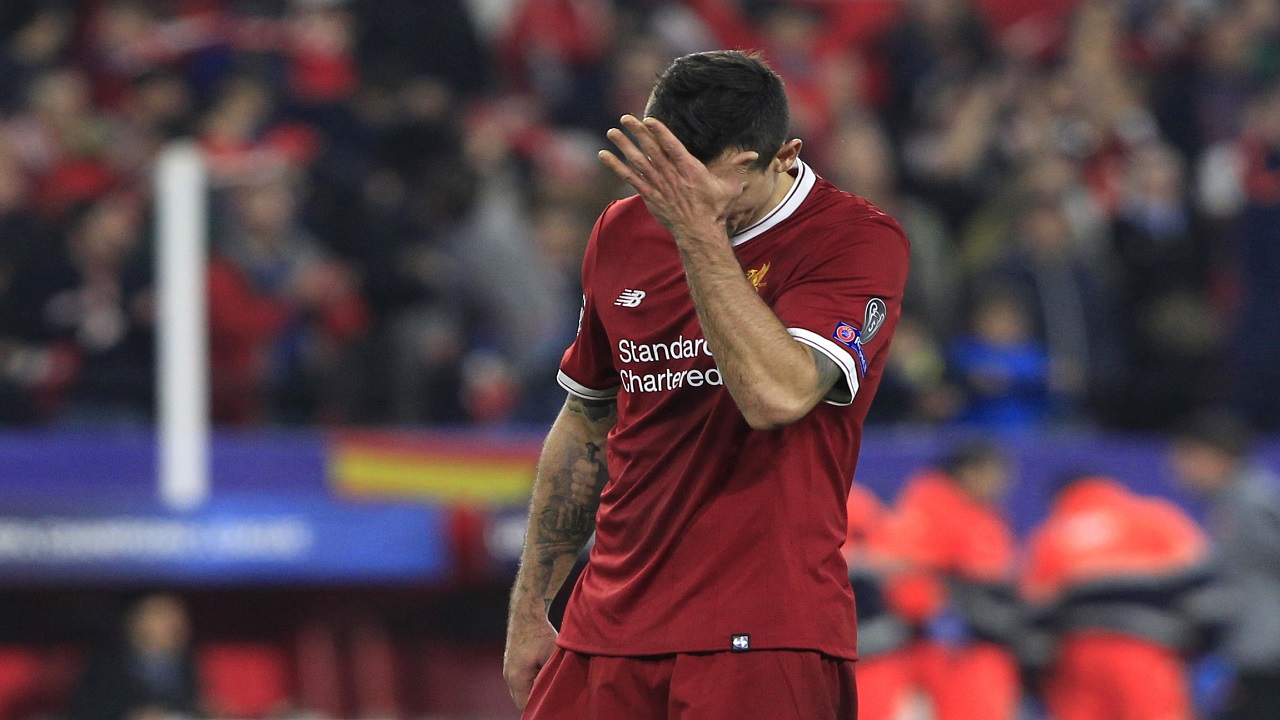 Liverpool's Dejan Lovren reacts at the end of a Champions League group E football match against Sevilla at the Ramon Sanchez Pizjuan stadium in Seville, Spain, Tuesday, Nov. 21, 2017. Sevilla tied the game 3-3 in the last minute.

Sevilla recovered after conceding three goals in the first 30 minutes against Liverpool, salvaging a 3-3 draw with an injury-time equalizer in the Champions League on Tuesday.

Roberto Firmino scored twice and set up Sadio Mane's goal in the first half-hour. But the hosts rallied with a pair of goals by Wissam Ben Yedder in the second half and Guido Pizarro's late equalizer off a corner kick.

Liverpool could have secured their return to the knockout stage after an eight-year absence, but it heads home for the final round needing to beat Spartak Moscow, which was just three points behind.

Spartak, held by last-place Maribor to 1-1 in Russia, remains with a chance of advancing.

A home win on Tuesday would have been enough for Sevilla to advance from the group stage for the second consecutive season, but Liverpool shot out of the gate.

Only two minutes in, Philippe Coutinho made a corner cross into the near post, Georginio Wijnaldum deflected the ball toward the far post, and Firmino ran behind defenders to drive his shot home.

The second goal in the 22nd came after Firmino redirected another Coutinho corner from the right side, and Mane made it to the far post to score with a diving header past Sevilla goalkeeper Sergio Rico.

Firmino scored his second in the 30th on a breakaway spearheaded by Mane down the left side. The Senegalese's shot from inside the area was stopped by Rico but Firmino was in position to easily tap the ball into the net off the rebound.

Firmino just missed a great chance on a shot saved by Rico in a sequence in which both teams came close to scoring several times.

Nolito cleared Liverpool defender Joe Gomez inside the area but his shot was just tipped by goalkeeper Loris Karius before hitting the far post and returning to his hands. A minute later, Ben Yedder entered the area with only Karius to beat but sent his shot just wide.

Yedder got on the board with a header in the 51st and a penalty kick in the 60th. His first attempt went in but the referee called it back because players entered the penalty area.

Liverpool had its chances to put the game away as Sevilla pressed.

Liverpool is trying to return to the last 16 for the first time since 2008-09, when its run to the quarterfinals was stopped by Chelsea.

Sevilla was eliminated by Leicester last season in the round of 16, which marked the team's first appearance in the knockout stages since 2009-10. It has never made it past the last 16 in the Champions League era.

The latest result extended Sevilla's unbeaten streak at home to 26 matches in all competitions, with 17 wins and eight draws.