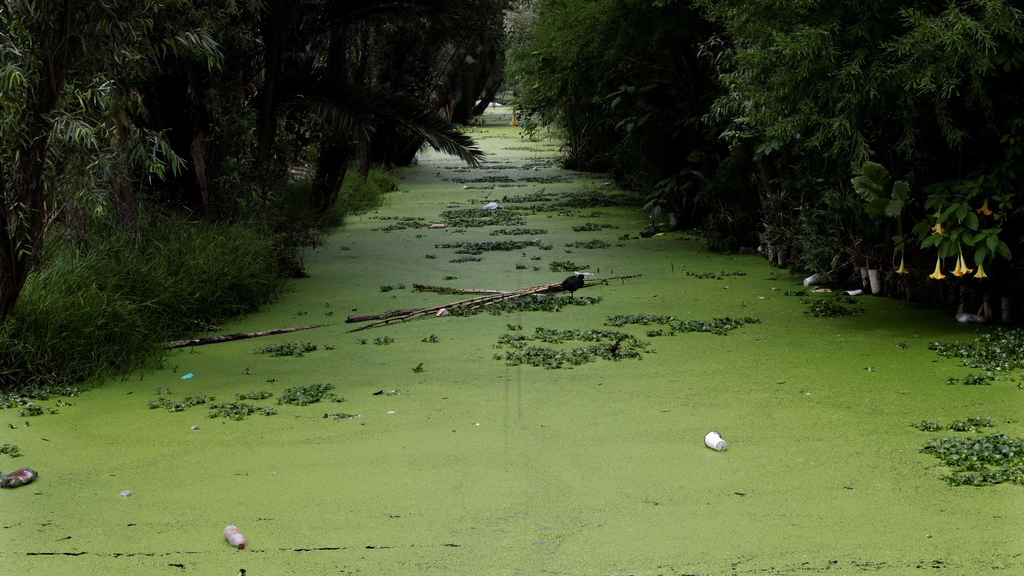 n this June 27, 2017 photo, a green layer of sludge covers a canal in Xochimilco, in Mexico City. A late July report by the Universidad Autonoma Metropolitana (UAM), in collaboration with local NGO Controla tu Gobierno, indicates that most of the water being fed into Xochimilco’s canals comes from a water treatment plant known as Cerro de la Estrella, whose output contains “a high level of fecal coliform that indicate sewage.” (AP Photo/Marco Ugarte)

Sewage breakdowns in Mexico City's "floating gardens" of Xochimilco and in the country's Yucatan peninsula resort of Isla Holbox have officials warning of threats to residents and tourism.

Holbox's sewage problem hit the pages of major Mexican newspapers this week just as a report was released on the capital's own waste issues, making it clear neither is an isolated event.

Mexico has a poor track record of sewage treatment nationwide, but Holbox's mayor told The Associated Press on Friday that the situation is critical on the island, whose emerald waters are home to flamingos and whale sharks.

"On every street corner, there is a small sewer cistern," said Emilio Jimenez, mayor of the township of Lazaro Cardenas, which includes Holbox. "Right now, these are overflowing, and the liquid spilling out is urine. Of 81 cisterns, 21 are failing."

Local media reported faecal material is building up in the low swampy ground around Holbox's failing sewage treatment plant. A video shows men in tall rubber boots trudging through the lush jungle, water filled with faeces up to their knees.

The treatment system was built 15 years ago to serve 800 people and is not equipped to handle the influx of hotels, tourists and new residents that have flocked to the tiny island off Yucatan. It now has 3,000 residents and welcomes about half that number of tourists during peak periods.

"The sewage treatment plant is working at 20, 30 percent of capacity. It is very old, very damaged," Jimenez said. "The toilets in residents' homes are back-flowing, spewing out."

While tourists aren't as exposed to the problem, they are complaining about another: the island's primitive diesel generator power system has been failing, too, leaving visitors to deal with the 95-degree heat.

"Clearly, this affecting tourism a lot, because the blackouts cut off the air conditioning in the hotels, and the tourists complain about the heat," Jimenez said. "And when the electricity goes out, there is no water pumping, so there is a lack of fresh water."

While less visible, a similar problem is affecting Xochimilco's "floating gardens," according to a report released Thursday. A UNESCO World Heritage Site, the Mexico City district is a series of canals and agricultural plots built by the Aztecs on floating beds of reeds, tree roots and soil.

The report by the Universidad Autonoma Metropolitana in collaboration with local civic group Controla tu Gobierno indicates that most of the water being fed into Xochimilco's canals from the Cerro de la Estrella water treatment plant contains "a high level of faecal coliform that indicates sewage."

The report said authorities should consider stopping the flow of treated water into the canals since their waters are used to irrigate vegetable gardens.

Many Xochimilco farmers have already switched from growing vegetables to planting flowers because soil is contaminated from the murky waters. Many of the canals are covered by a green layer of sludge.

The situation could get worse, the report warned.

It said 80 percent of Mexico City's waste is fed to the Cerro de la Estrella plant. If it were to be hit with a breakdown on the scale of that on Isla Holbox, "it would be the end of Xochimilco and spell disaster for the entire city," the report said.