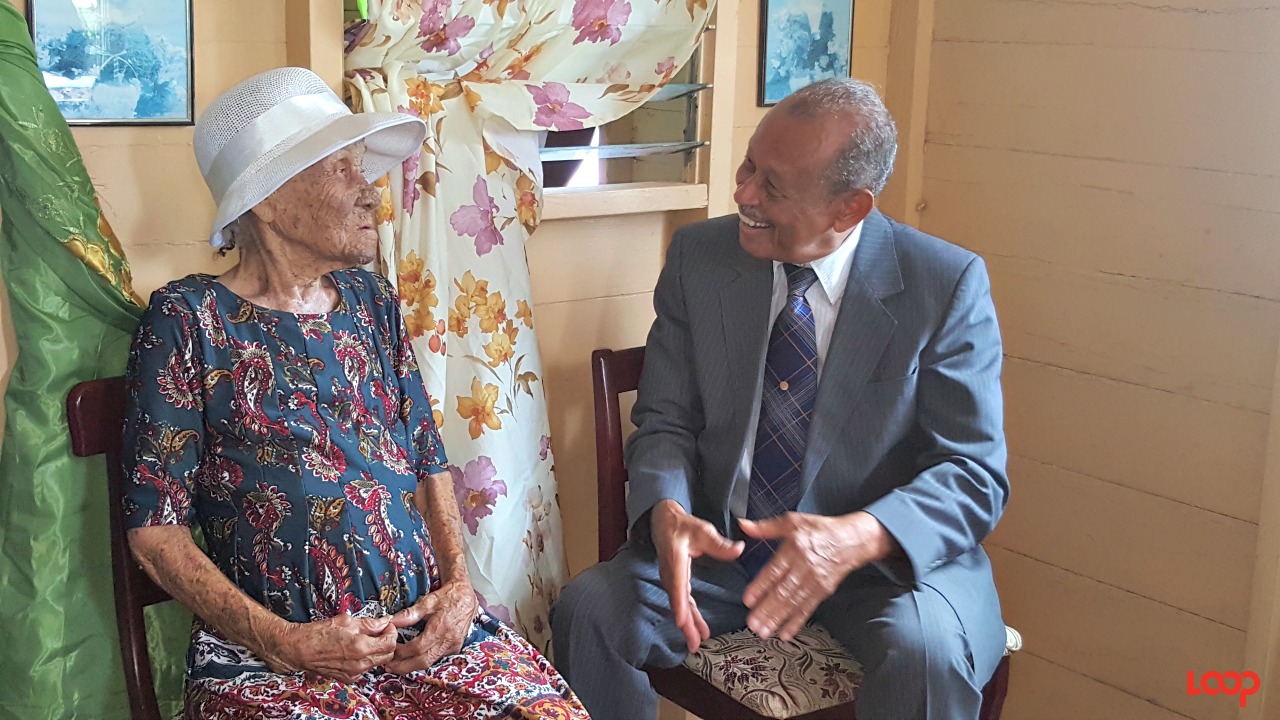 Her two favourite tunes are ‘What a friend we have in Jesus’ and ‘Something like a stream’ and she belted out both during the morning's festivities at her St. Peter home.

Living in the North all her life, she moved from St. Lucy with her mother to Battaleys, St. Peter as a child. The once upon a time labourer had four children – three girls and one boy, but her eldest is deceased.

Her daughter Violet Ifill came in from Philadelphia and was happy to share in her mother’s celebrations. She said, “She was a very wonderful mother.” Una worked and helped support her younger siblings as the oldest in the brood. Her brother passed away at 96 or 97 and her two sisters Miriam Belgrave and Lilian Holder are both in their 90s now. Holder was scheduled to visit with Una later in the day, however Belgrave is wheelchair-bound and lives in a home. Una is the first person in the family to reach 100, and as it relates to her aunts, Violet said, “Hopefully they’ll make it to a 100 also.” 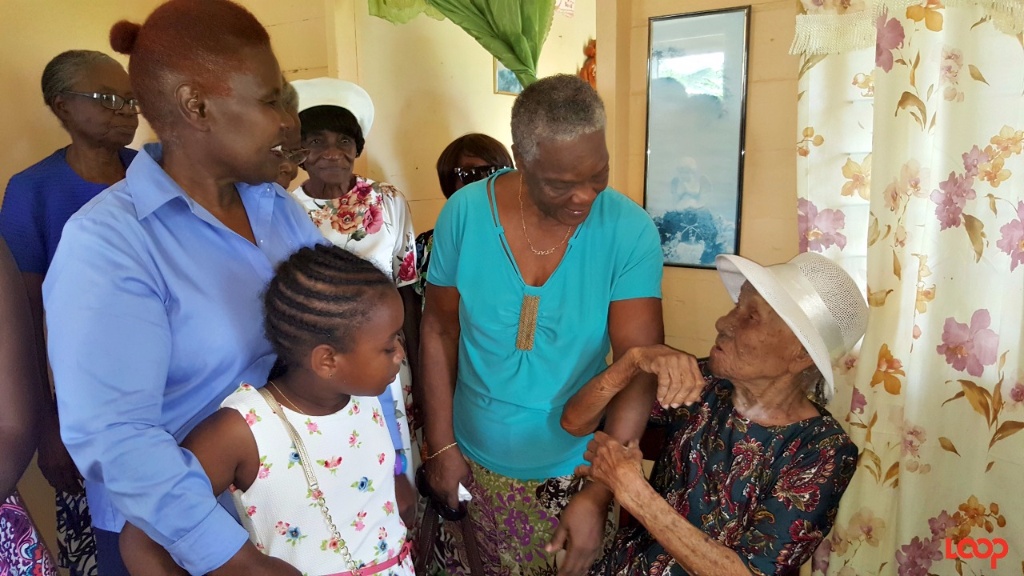 Violet’s daughter Sharon Ifill said that from her grandmother she remembers her teaching them to be God-fearing. “Put God first in everything.”

In true testament, when asked what helped her get to 100 years old, Una told the media:

“I try my best to put God in front to guide me, and protect me and direct me the right way until the time is up. Praise the Lord. What a friend I have in Jesus and all our sins and grief to bear and you carry all to God in prayer.”

She said “God bless all that come and look for me today, in Jesus’ name. Praise the Lord. Thank God.”

Her pastor and church friends from the Church of God of St. Peter along with her long-standing friends broke out in song singing ‘A happy birthday to you’ and Una started to liven up and sway in her chair and they embraced her lovingly sharing hugs and kisses. Then they laughed and segued straight into one of her favourites ‘Something like a stream’. When the quiet returned, Una who usually has the pastor visit her to sing and preach loudly said, “Come for muh and carr muh to church!” To which she was promised, “This Sunday okay.”

She does not go long distances like before, but she walks around and she looks out. Her hearing is not the best yet, but Sharon assured, “she can look down the road and tell you who is that out there. Well, that is Lou is out there standing up. She recognises voices and everyone.” 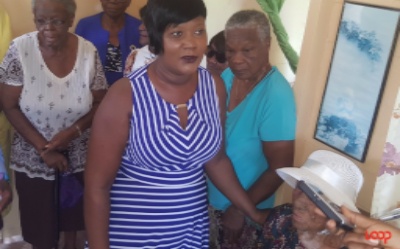 She has six grandchildren and six great-grandchildren. Her grandson, Jerry Ifill, Violet’s son gave the vote of thanks and started by giving God thanks and praise for his grandmother. He said, “Many have trodden on this land, few and few, and very few will reach this feat, so I acknowledge God’s supreme and graceful hands which blessed my grandmother thus far.”

This was Sir Philip’s first centenarian visit since being sworn into the role of Acting Governor General just after midnight on Saturday, July 1, 2017. Sir Philip said “it was a pleasure to be here” visiting with Una and her houseful of guests, and looking at her “nice offspring”, he added, that he is hoping “somebody who would have succeeded me down the line will be able to come here and do what I’m doing this morning. Wishing them or congratulating them…happy 100th birthday!” 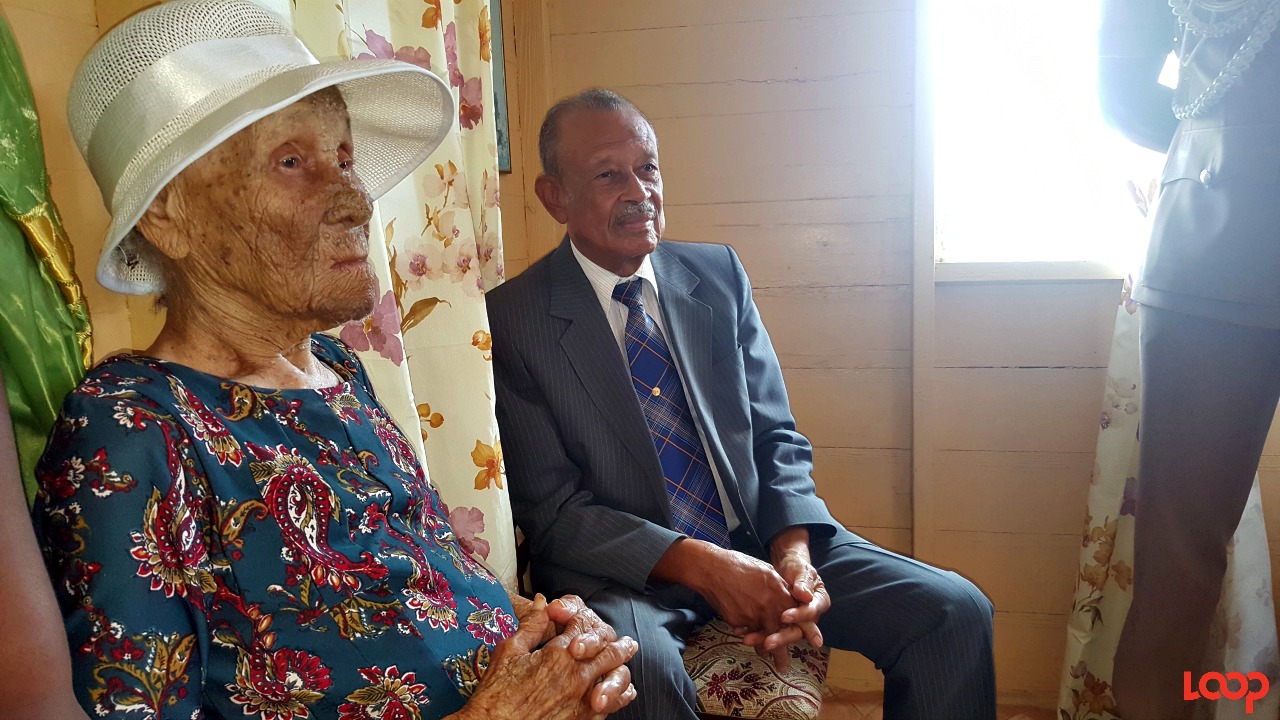 Also hailing from the North himself, he also confessed, “It always good to see the people from the North…It was really a pleasure to be here with you all.” Taking his leave after she had sung him one more hymn, he told her she still has “a wonderful voice”.

Some students from the Roland Edwards Primary School at the end of her street were also present on the celebratory occasion.

Search on for Barbadian centenarians