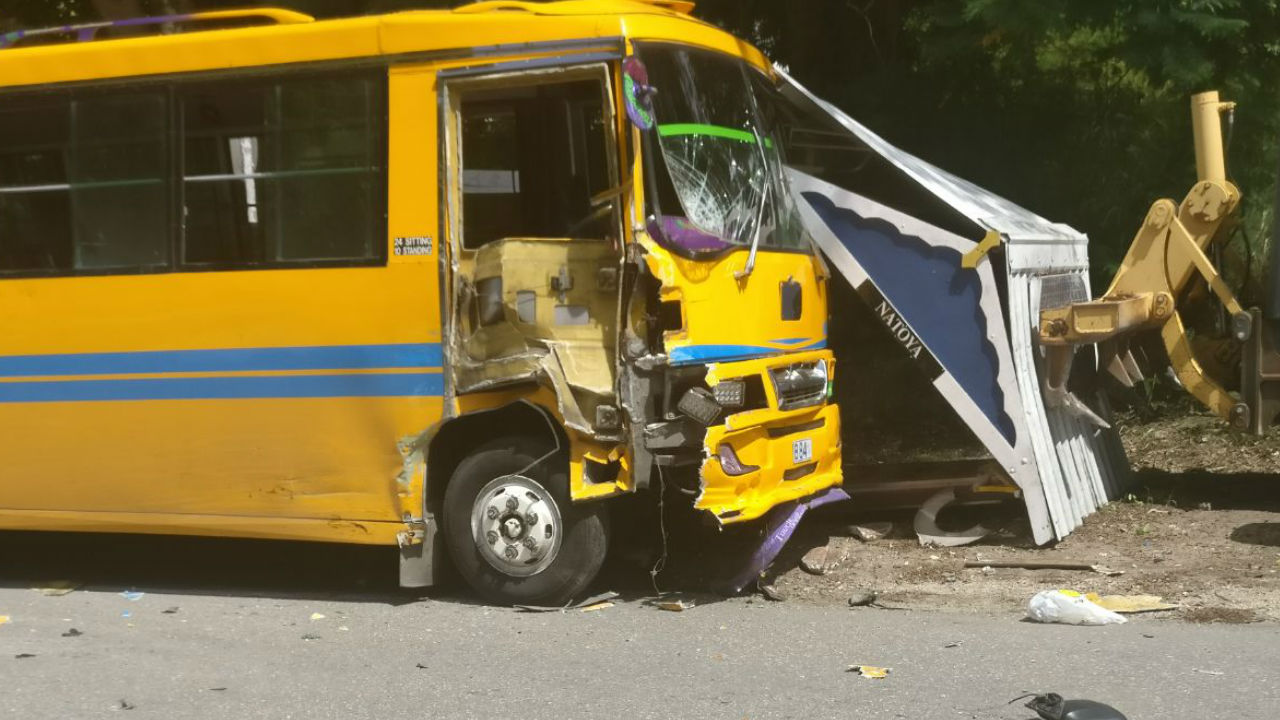 Commuters are being put on notice to not let their guards down while awaiting public transportation at bus stops and bus shelters across the island following the two accidents in less than a week.

Two shelters were destroyed in two separate accidents, one on Christ Church on Friday and one in St. James, today, Tuesday, November 7, and this has led to the President of the Barbados Road Safety Association along with the CEO of Adopt-a-Stop calling for greater vigilance to be exercised on our roadways.

Take out the headphones, look up from your handsets and do not concentrate on saving a charging cellphone, if you are using the solar USB port at any of the island’s Adopt-a-Stop bus shelters, in case of an accident.

“Don’t let your guards down. People are losing control of vehicles, and people are still driving distracted.”

She said that November is Road Safety Month and already road fatalities for 2017 stand at “24” in comparison to “9” for all of 2016. Therefore, she urged:

“Be more vigilant. Do not feel the bus shelter is a safe area. With these accidents happening, it shows we must be on the alert at all times… Do not put your safety in the hands of anybody else.”

And she called on drivers to drive defensively and not distracted. She laid much of the blame for the accidents occurring at the feet of drivers who are driving and texting, or driving under the influence of alcohol or drugs, or who are driving while tired or those who are speeding.

She said that drivers too need to exercise vigilance, scanning the roads and all around, as well as watching their speedometers so as to maintain “safe speeds”. She chastised the speedsters saying that though it is enticing to accelerate when the roads, especially the highways, are free of traffic, they should refrain from doing so. “Because the road is clear that is no excuse. Do not drive too fast, especially for the conditions.”

In terms of Friday’s accident where the car drove through the bus shelter and was left stuck on the concrete platform, the driver was reported in the media as saying that it was raining heavily and when a car ahead of him stopped to turn right into the Ministry of Agriculture’s Graeme Hall headquarters, he tried to stop but his car picked up a slide and he pulled left and crashed into the bus shelter.

Stating “the fault lies with drivers”, he pointed specifically towards, “texting while driving” and urged drivers to pay more attention when driving on the road, "particularly when it comes to the use of their phones".

In terms of repair work, he said that when Adopt-a-Stop puts up a shelter, it is fully-assembled and "perfect" with the sponsor’s details and solar technology, so it costs "thousands of dollars" to refurbish the destroyed shelters once smashed.

Beyond that, he also said that more significantly, the damages are a major inconvenience to commuters. He said that they are recording some 75 000 rides per day through their bus shelters with some persons taking the bus twice per day.  “So even if one shelter is missing from the road due to an accident, it is a significant inconvenience to the commuters, in addition to the monetary cost of refurbishing the shelter and its solar components from scratch.”

UPDATE: Three-vehicle smash-up on the West Coast with minor injuries