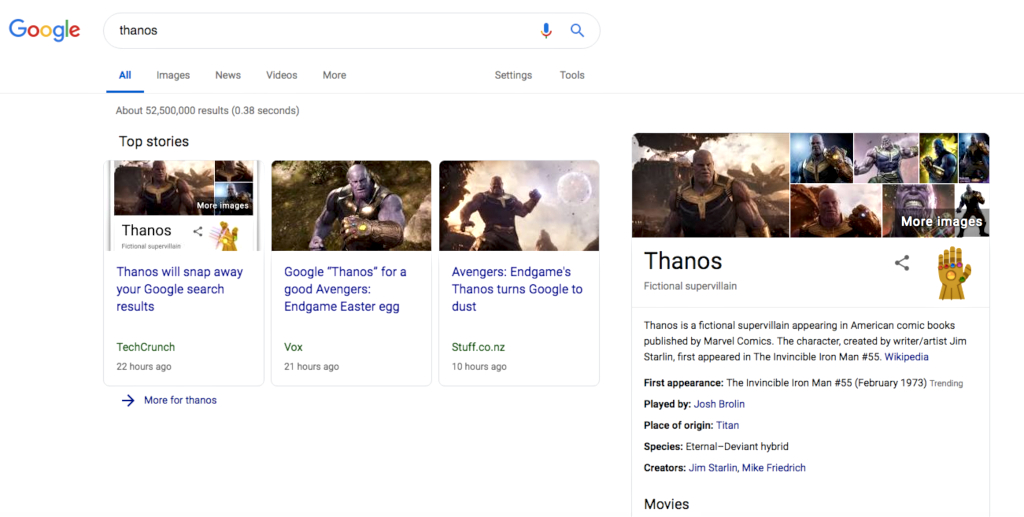 The search engine Google does its tech magic once again, but this time using Thanos.

With Avengers: Endgame out now, Google really hit the nail on its head with Marvel fans as they embedded a treasure trove in the world wide web for persons to find and be amazed. (Instructions on how you too can enjoy it, below)

But wait, for the non-fan, who is Thanos?

Thanos is one of Marvel Comics fictional supervillains. He was created by writer/artist Jim Starlin, and first appeared back in 1973 in American comic books in The Invincible Iron Man #55.

In Avengers: Endgame, Thanos is played by actor Josh Brolin.

What is Avengers: Endgame?

The grave course of events set in motion by Thanos that wiped out half the universe and fractured the Avengers ranks compels the remaining Avengers to take one final stand in Marvel Studios' grand conclusion to twenty-two films, "Avengers: Endgame."

So how do you experience this Google Easter Egg of sorts right?

Step 2: Once the page loads, click the gauntlet to the right.

We won't spoil it for those of you who haven't checked it out as yet, but let's just say 'Now you see it... now you don't!'

Don't read our second conclusion below!!!

We're sure happy that Thanos got all the gems for this tech trick to happen, but we're sure he's happier than us, with his endgame.

"I will shred this universe down to it's last atom and then, with the stones you've collected for me, create a new one. It is not what is lost but only what it is been given... a grateful universe."

'Avengers 4' gets a title, trailer and new release date

'Avengers' overpowers 'Breaking In', 'Life of the Party'