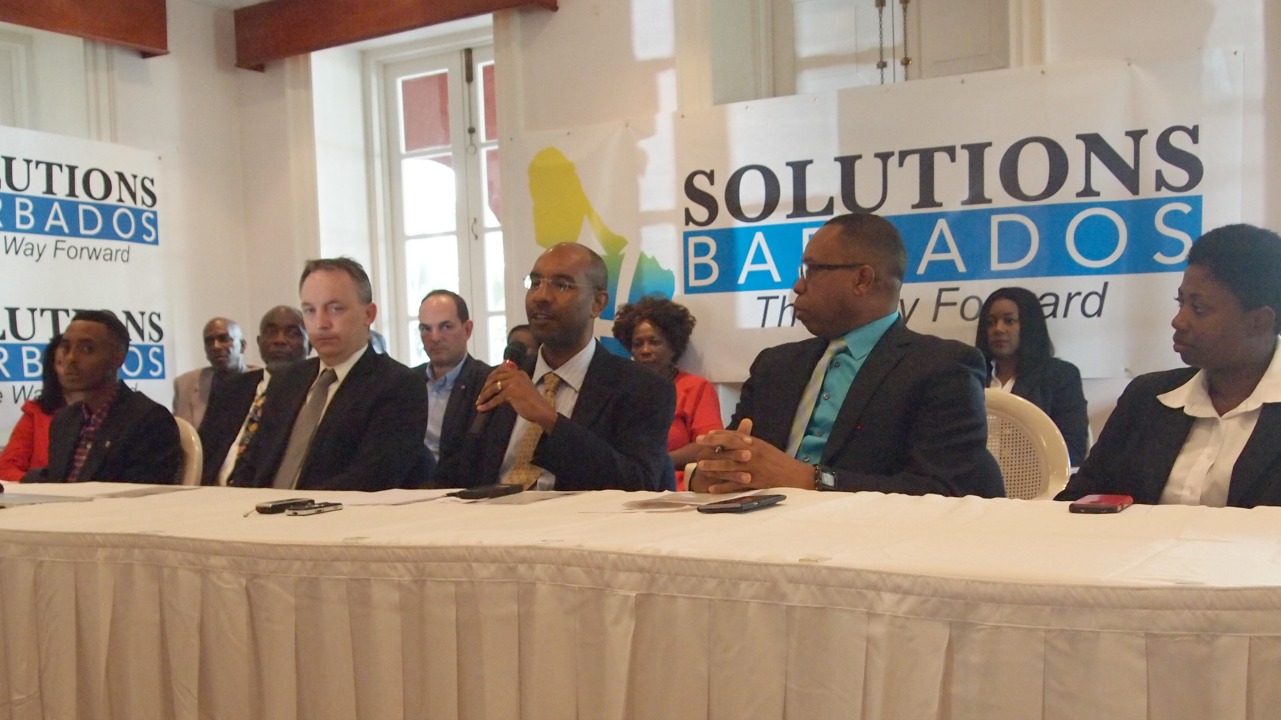 Solutions Barbados, a political party launched in 2015, has announced its economic policies based on an elimination of consumption taxes, including Value Added Tax (VAT) and National Social Responsibility Levy (NSRL).

Solution Barbados officially announced their 24 candidates at a press conference this morning at the Marriott Hotel and outlined the party proposals.

Party leader and engineer, Grenville Phillips II, painted a very bleak picture of the country’s economy, noting that the size of government’s debt was especially worrying.

“Barbados is over 150 percent of GDP in debt - we should not have been this far in debt. The IMF made it clear that our debts should never exceed 40 percent of GDP. When you exceed 40 percent of your Gross Domestic Product you are basically sunk as a country, you will eventually go the IMF and you normally devalue. We are on the brink of economic ruin and we simply cannot sit by and do nothing.”

Candidate for Christ Church East Central and businessman, Scott Weatherhead, spoke to the party’s economic plan for removing taxes where he explained the policy is expected to balance the government’s budget and increase the spending power of Barbadians.

He said if every individual and business paid the required amount of taxes - ten percent - the government would have more than enough money for its expenses. He said taxes such as VAT, NSRL and the two percent commission of foreign exchange transactions should be completely withdrawn.

“You cannot continue to tax a country constantly and think that out of taxing the country you are going to make enough revenue to pay your expenses as a government. In fact, you have to do the reverse. The reverse is that you would remove taxes and allow the people to have more income so that they will spend the income. And as they spend the income they have more of, you can get economic growth and activity out of that.”

Other policies outlined by Solutions Barbados to put the country's economy in better standing include the implementation of the ISO 9001, an international quality management system expected to improve the efficiency the public sector and transform government operations in just eight weeks.

In addition, the party plans to deal with any corruption in the country by implementing a three-month amnesty where anyone who has paid or received a bribe dating back to Independence in 1966, will come forward and repay the money. After the three months, there will be whistle blower legislation enacted so that anyone who has evidence of corruption can come forward and receive a reward of the full value of the bribe.

Candidate Paul Gibson spoke on the party’s health policies where he said Solutions Barbados has developed a plan to deal with the burden Non-Communicable Diseases (NCDs) is placing on government’s health bill by introducing a tax on high salt and high alcohol products while removing taxes from all healthy foods.

Solutions Barbados, which was first launched in July 2015, is hoping to gather the full slate of 30 candidates before the next General Elections is called.

UPP open to all, says Eastmond