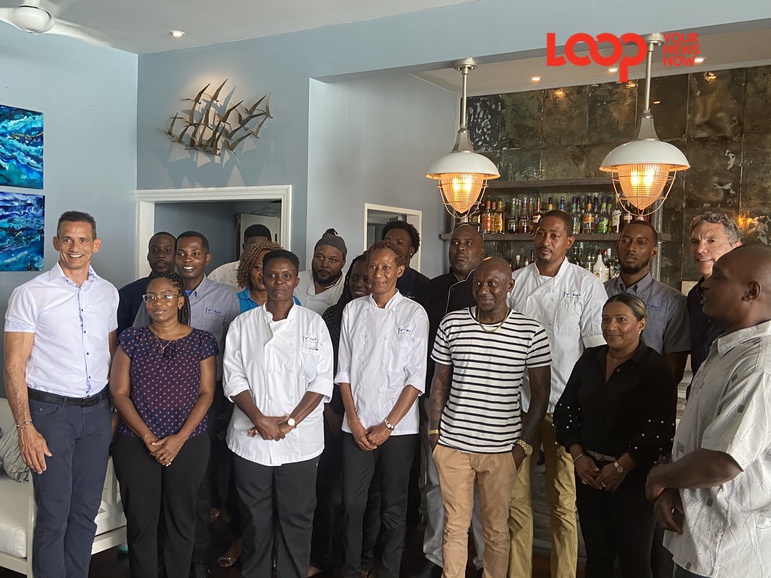 The new management and staff of Primo Bar and Bristo gathered at the St Lawrence Gap restaurant for training ahead of the July 1 opening.

South Coast restaurant, Primo Bar & Bristo will be reopening its doors under new ownership from July.

Mark Maloney and Zary Evelyn have taken the once-failed business under their wings after its unexpected closure and subsequent debacle earlier this year. Chaps Restaurants Ltd suddenly announced the closure of Cin Cin By The Sea, Primo Bar & Bistro and Hugos Barbados. The abrupt announcement on March 2 left 149 employees from the Chaps chain of restaurants out of work and in many cases it was out advance warning or timely notice.

Out of the 18 employees hired at Primo, 14 are former employees comprising of bartenders, kitchen and waiting staff. The restaurant will reopen on Wednesday, July 1. The opening days are Tuesday to Sunday from 5 pm.

Reflecting on the traumatic experiences of the employees, co-owner Mark Maloney assured that team that there would be mutual trust and respect.

"We would like to assure the public and the staff more so that we are trustworthy people. We had these discussions about trust and our interests are with the people that work for us first and foremost and once there is trust and respect and there are all the good things that will go into what we are going to do, it will be a success so there will be no reason to consider not being in the business or getting into the business in uncertain times," Maloney stated.

Speaking on behalf of the staff,  head chef Jason Gittens stated that the employees were looking forward to offering pristine service once again. Gittens told Loop News that when he was informed about the reopening, he instantly appealed for the return of the former employees.

"All of us have been through a very difficult time with the abrupt closure so we were really feeling it. We got a double whammy with Primo and Chaps closing so abruptly and then going into COVID so it was really hard on us. When I got the call what was important to me was getting primo staff members back into Primo," Gittens said.

Aside from changing ownership, the South Coast fine-dining experience has changed its menu to cater to the wider Barbadian public.

Given the significant decline in tourism, Co-owner Evelyn revealed that the fine-dining menu was altered to monetize interest locally.

"We have changed the menu so we can appeal to a wider scope of Barbadians and residents living here," Evelyn said, adding "Although we will retain our fine-dining style . . . we have taken the sacrifice to lower prices so we can be competitive in this world right now . . . We have to change in order to adapt to the times right now".

Before its March closing, 70 per cent of bookings at Primo were from tourists. Evelyn emphasized that owning a restaurant in a post-COVID-19 environment was a "tough undertaking" as businesses adapted to the new normal.

"Being a restauranteur in the current environment in Barbados is a very tough undertaking. Restaurants need the tourism in most circumstances to succeed so we are all operating on very tough times and the strong will survive until we can get the tourists back in Barbados," he stressed.

Asked about the other businesses under Chaps, Evelyn said that Primo was the only venture that they were interested in acquiring.