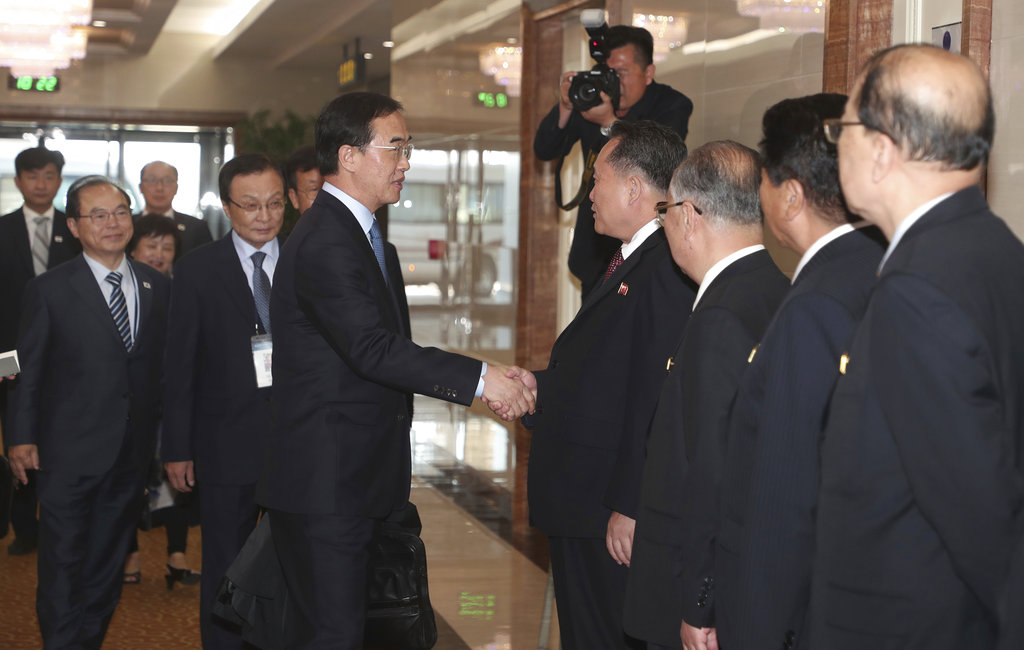 A South Korean government delegation arrived in North Korea on Thursday for a joint celebration of the anniversary of a 2007 summit and to possibly hold further peace talks.

South Korean Unification Minister Cho Myoung-gyon said the visit is an opportunity to strengthen "reconciliation, cooperation and peace" between the rivals.

Cho's group was greeted at Pyongyang's airport by Ri Son Gwon, chairman of the North Korean agency that handles inter-Korean affairs, who said the agreements produced by the series of inter-Korean summits — two during the 2000s and three in 2018 — have set the "standard for reunification."

The visit comes as U.S. Secretary of State Mike Pompeo prepares to make his fourth visit to Pyongyang on Sunday with the aim of setting up a second summit between President Donald Trump and Kim Jong Un.

Kim and Trump met in Singapore in June, where they issued vague aspirations for a nuclear-free Korean Peninsula without saying when and how it would occur. Follow-up talks between the countries stalled, with Pyongyang accusing Washington of making "unilateral and gangster-like" demands on denuclearization. That left Seoul lobbying hard for a second summit between Trump and Kim to keep alive a positive atmosphere for nuclear diplomacy.

Pompeo said Wednesday he's optimistic he'll come away with a plan for a second summit between Trump and Kim and progress on a "pathway for denuclearization." However, he distanced himself from an earlier stated goal of getting North Korea to abandon its nuclear weapons by the end of Trump's four-year term in January 2021.

During his three-day visit to Pyongyang, Cho plans to hold talks with Ri to discuss how to carry out the agreements made by Kim and South Korean President Moon Jae-in at a summit in Pyongyang last month. That was Kim and Moon's third meeting this year as they work to resolve the nuclear standoff following a torrid run of North Korean nuclear and missile tests.

The South Korean delegates will also tour major North Korean facilities and attend a performance of the North's iconic mass games. It's unclear whether they will meet Kim before returning home on Saturday.

During their Pyongyang summit, Kim and Moon said they agreed to reduce the conventional military threat between them and hold another summit in Seoul, potentially within the year. North Korea said it would allow outside experts to observe the dismantling of a missile engine test site and a rocket launch pad, and might dismantle its main Nyongbyon nuclear complex if the United States takes unspecified corresponding measures.

Cho told South Korean lawmakers on Monday that North Korea is estimated to have 20 to 60 nuclear weapons, in Seoul's first public comment about the size of the North's weapons arsenal. North Korea's state media on Tuesday issued a commentary urging Washington to lift sanctions if it wants further progress in their stalled nuclear talks.

Book on Trump raises worries in South Korea about alliance

Seoul: Rival Koreas to meet to prepare for leaders' summit