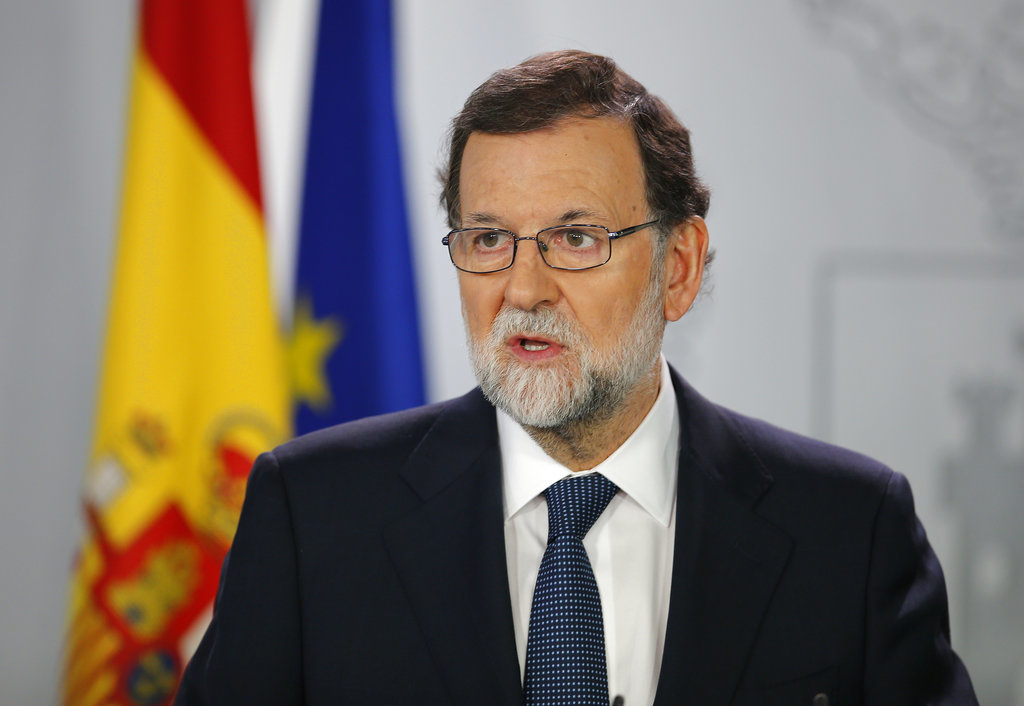 Spain's Prime Minister Mariano Rajoy speaks during a press conference at the Moncloa Palace in Madrid, Spain, Wednesday, Oct. 11, 2017. The Spanish Cabinet met in Madrid Wednesday to work out its response to an announcement from the head of the wealthy Catalonia region that he was proceeding with a declaration of independence, further fueling Spain's worst political crisis in decades. (AP Photo/Paul White)

Spanish Prime Minister Mariano Rajoy demanded on Wednesday that the Catalan leader clarify whether he has declared independence, issuing a veiled threat that the central government could limit or rescind the region's autonomy if he has.

Rajoy said the Catalan government's response would be crucial in deciding "events over the coming days."

It is the first time that Rajoy has openly said that Article 155 of the Spanish constitution will be the next step taken by the government if Catalan authorities don't backtrack. He said the government "wants to offer certainty to citizens" and that it is "necessary to return tranquility and calm."

Rajoy issued the demand following a special Cabinet meeting to respond to an announcement from the president of the wealthy Catalonia region, Carles Puigdemont, that he was proceeding with a declaration of independence but was suspending it for several weeks to facilitate negotiations.

Opposition Socialist leader Pedro Sanchez said that Spain's two main political parties agreed to renegotiate laws governing autonomy. He said a deal was reached with Rajoy to open talks in six months on reforming the constitution that would allow changes to the current setup governing Spain's 17 regions, including Catalonia.

Sanchez said his party wanted the reform to "allow for Catalonia to remain a part of Spain," and that the socialists were backing Rajoy's call for clarification from Puigdemont.

In a highly anticipated speech Tuesday night, Puigdemont said the landslide victory in a disputed Oct. 1 referendum gave his government in the regional capital, Barcelona, the grounds to implement its long-held desire to break century-old ties with Spain.

But he proposed that the regional parliament suspend the effects of the declaration to commence a dialogue and help reduce tension, in what is Spain's worst political crisis in decades. The central government in Madrid has given little indication it is willing to talk, saying it didn't accept the declaration and didn't consider the referendum or its results to be valid.

Spanish Deputy Prime Minister Soraya Saenz de Santamaria said late Tuesday that the Catalan leader "doesn't know where he is, where he is going and with whom he wants to go."

She said Puigdemont had put Catalonia "in the greatest level of uncertainty seen yet."

Article 155 of the Constitution allows the central government to take some or total control of any of its 17 regions if they don't comply with their legal obligations. This would begin with a Cabinet meeting and a warning to the regional government to fall into line. Then, the Senate could be called to approve the measure.

About 2.3 million Catalans — or 43 percent of the electorate in the northeastern region — voted in the referendum. Regional authorities say 90 percent were in favor and declared the results valid. Those who opposed the referendum had said they would boycott the vote.

Rajoy's government had repeatedly refused to grant Catalonia permission to hold a referendum on the grounds that it was unconstitutional, since it would only poll a portion of Spain's 46 million residents.

Catalonia's separatist camp has grown in recent years, strengthened by Spain's recent economic crisis and by Madrid's rejection of attempts to increase self-rule in the region.

The political deadlock has plunged Spain into its deepest political crisis in more than four decades, since democratic rule was restored following the dictatorship of Gen. Francisco Franco.

Spain warns it will act if Catalonia declares independence