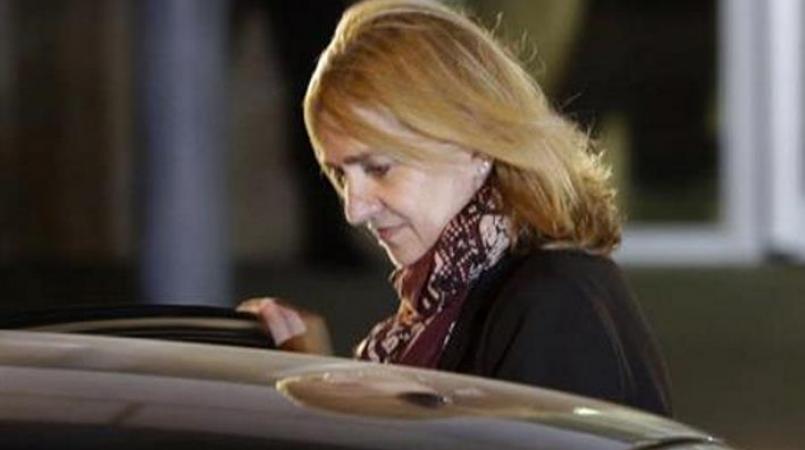 A panel of judges ruled that Cristina, the 51-year-old sister of King Felipe VI, will be required to pay nearly 265,000 euros (over $280,000) in fines because the court considers that she indirectly benefited from the fraud.

Her husband, Inaki Urdangarin, was found guilty of evading taxes, fraud and various other charges. He was sentenced to six years and three months in prison and a fine of 512,000 euros ($545,000).

Urdangarin, a 49-year-old former handball Olympic medalist, can still appeal the decision to the Supreme Court, but the public prosecutor announced Friday that it would request a hearing to decide whether he needs to await developments in jail. He is still free so far.

The trial centered on accusations that Urdangarin used his former title, the Duke of Palma, to embezzle about 6 million euros ($6.6 million) in public funds for the nonprofit Noos Institute.

In a country mired with corruption scandals in politics and business, Spaniards paid close attention to the "Noos case" since the first signs of Urdangarin's involvement emerged six years ago. As the scandal unfolded, Former King Juan Carlos' decision to abdicate the throne in 2014 was seen as an effort to allow his son Felipe to restore the monarchy's credibility.

When his sister Cristina was indicted, King Felipe cancelled her titles of Duchess of Palma, granted by their father in 1997 on the occasion of her wedding. She and Urdangarin are no longer invited to any official events by the Royal House.

Felipe and Queen Letizia made no immediate comment Friday on the court's rulings during a visit to a museum in Madrid with the Hungarian president. A spokesman for the Royal House told Spanish media they respected the courts' independence.

Inigo Mendez de Vigo, the minister who speaks for Prime Minister Mariano Rajoy's conservative government, said Friday that it "shows that nobody is above the law and that the rule of law works."

The Noos Institute organized conferences and sports-related events. Among the companies used by the institute to hide funds was Aizoon, a real estate consulting company jointly owned by Cristina and Urdangarin that paid for family holidays and wine bills, according to court documents.

Urdangarin ran Noos Institute with a partner, Diego Torres, who was sentenced to 8 1/2 years in jail in Friday's ruling. Torres' wife and Cristina, for whom an anticorruption group was asking for 8 years of jail each, were absolved by the court.

A lawyer with Cristina's defense team, Miquel Roca, said the princess was "satisfied for the acknowledgement of her innocence" but she was still convinced that her husband wasn*t guilty.

"If we believed in the judicial system when the princess was made to sit in the dock, I think citizens can trust in it when she's absolved," Roca told reporters in Barcelona.

The couple lived in a mansion in Barcelona for years with their four children but since the investigation started they moved the family to Switzerland. On Friday, reporters waited outside their house in Geneva, hoping in vain to get a glimpse of the couple.

Spaniards had been waiting for the judges' verdict since the trial ended in mid-2016. On Friday, reactions in the street were mixed, with a some people still expressing doubts over whether the law in Spain is the same for everyone.

"I think the prosecutor wasn't trying to prosecute the crime but rather to protect the alleged criminal," said Miquel Puig, a 62-year-old economist in Barcelona.

Maite Mila, a 52-year-old lawyer, said she believed the princess "benefited from what her husband did."

"We have to respect the decision of the justice but I think they did it wrong," Mila said.

FEATURED IMAGE CAPTION: In this Jan. 11, 2016 file photo, Spain's Princess Cristina leaves a courtroom during a corruption trial, in Palma de Mallorca, Spain. A Spanish court on Friday, Feb. 17, 2017 found Princess Cristina not guilty in a tax fraud case in which her husband Inaki Urdangarin, was sentended Friday to 6 years and 3 months in prison for evading taxes, fraud and various other charges.