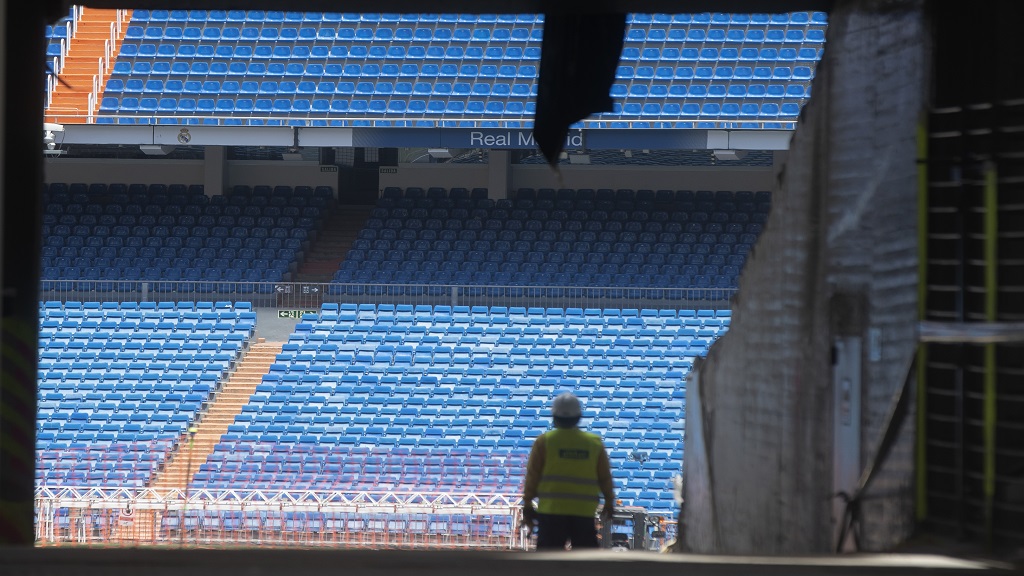 Workers walk into Real Madrid's Santiago Bernabeu stadium in Madrid, Spain, Monday, May 25, 2020. Spanish league clubs are now allowed to train with groups of up to 14 players as the league stays on track to restart in less than three weeks. (AP Photo/Paul White).

Spanish football matches could have the look of a video game when the competition resumes next month.

The league is contemplating adding virtual crowds to the television broadcast of matches that will be played in empty stadiums because of the novel coronavirus (COVID-19) pandemic.

Spanish league president Javier Tebas said Friday the league is working with the possibility of giving fans an option to watch the original feed from the empty stadiums or an alternative one with crowds superimposed on the stands, similar to those in video games.

“We are testing to see if we can allow the spectator to choose between two images — the real one or another with virtual fans and sounds,” Tebas said in an online video conference organised by Spanish sports newspaper Marca. “We want to give fans options. The tests I’ve seen so far are impressive.”

Tebas said fans may also have the option of hearing pre-recorded crowd noise or stick with the live sound from the empty stadiums.

Tebas said the Bundesliga, which resumed recently in Germany, was successful using virtual sound during its matches, and the Spanish league wants to go a step further by using the virtual fans.

Clubs in different countries have experimented with new ideas for matches in empty stadiums, including placing large photographs of fans in the stands and using a large Zoom wall to make fans feel closer to the action.

The biggest challenge for the virtual crowd the Spanish league wants to use is to make sure it will work properly when superimposed during the live event.

Tebas said the Spanish league will also want to be at the forefront when real fans will be allowed back in the stadiums, which local government officials believe will be possible beginning next season with some restrictions that will include reduced attendance, distancing guidelines and the use of protective materials such as gloves and masks.

He said the league and the government are already working to allow the media to cover this season's matches on site when they resume on June 11.

Tebas said the league is expected to finish on July 19, with the next season starting on September 12. The European competitions are set to be played after the end of the domestic leagues.

Tebas wants matches every day until the end of the league, and he thanked the Spanish football federation for allowing matches to be played on Mondays and Fridays despite the league’s loss in a court dispute over scheduling games in those time slots.

He said the return to competition is crucial but won’t keep Spanish clubs from losing “at least 700 million euros ($772 million)" as a group because of the pandemic.

“It would have been serious if we couldn’t resume,” Tebas said. “Look at the French league, after they rushed into a decision (to cancel the remainder of the season). That would have been a catastrophe for us.”

Carmelo Ezpeleta, of MotoGP promoter Dorna, also participated in the online video conference and said the plan is to resume the series with races in Spain about a month after the Spanish league resumes.

“We are following soccer,” he said. “If they start in mid-June, we hope to begin about a month later.”

The first races would be without fans in Europe, with a second phase on other continents.