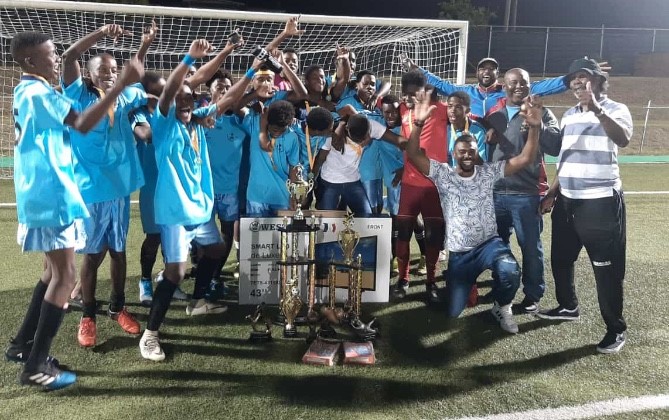 Sporting history was created on Sunday night at the Barbados Football Association (BFA) Wildey Turf, when the inaugural champions of the National Sports Council (NSC) Youth Development Programme U19 football competition were crowned.

Playing in front of a sizable crowd which included a number of sports administrators, members of parliament and government officials, the young athletes produced a competitive and entertaining display of football.

It was a game of two halves; St Michael North East dominated the first, while St Michael East came into their own in the second half.

St Michael North East utilized the pace and trickery of wide forwards, Jadon McCollin and Nadre Butcher to good effect as they caused all types of problems for the St Michael East defense.

McCollin scored in the 20th minute to give St Michael North East a deserving lead.

The score would remain 1-0 into the break, however, St Michael North East had the perfect opportunity to double their lead in the 53rd minute.

Chrislon Greene handled the ball inside the penalty area and referee Cadijah Mars pointed to the spot.

Coby Mayers stepped up to take the resulting spot kick but his right footed effort struck the left upright and away from danger.

St Michael East had a number of opportunities to level the score, with national U17 captain Roshon “Speedy” Gittens having one of the most memorable ones, as he received a pass at the top of the six-yard box but slipped as soon as he was about to shoot.

Jarad Maxius header seemed to be going towards the right hand corner of the net, but a brilliant reaction save by captain Shaquan Phillips in injury time, ensured that his team kept a clean sheet but more importantly a lead which saw them earn the championship.