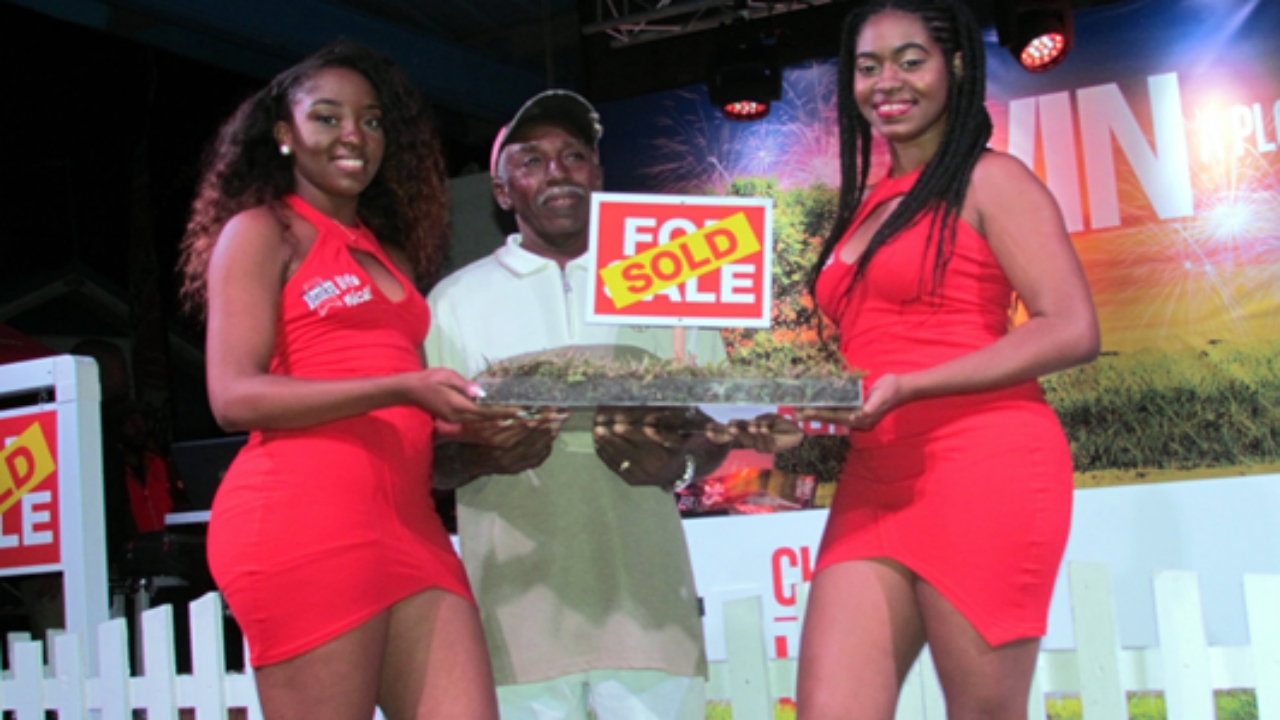 The grand prize winner of Banks Beer’s Cheers to my Land promotion, Anderson Baker (centre), poses for photographs with the Banks promotional girls.

This after he was declared the grand prize winner of Banks Beer’s Cheers to my Land promotion.

Anderson Baker of Eastbourne, St. Philip, was declared the winner after his name was pulled from more than 100,000 entries during a ceremony at Oistins Bay Garden last evening.  He walks away with a plot of land valued at more than $100,000 Barbados dollars.

Baker, a long-time fan of Barbados’ indigenous beer brand, said he has been entering Banks Beer promotions for more than twenty years and was so determined to win the Cheers to my Land promotion that he submitted more than one hundred entries.

An ecstatic Baker said, “I didn’t expect to win. This is good for me because right now, I’m renting land, but I still haven’t made up my mind on what to do with the prize.”

Marketing Manager, Banks Holdings Limited, Shafia London, says the competition’s aim was to reward the brand’s loyal fans. “Banks Beer is the beer of Barbados, so we are always looking for new ways to give back to our Barbadian customers. We thought that there was no better way to say ‘thank-you’ to our fans, than by giving away a piece of the rock.”

Sharing her sentiments was Category Manager for Banks (Barbados) Breweries Limited, Charles Walcott, who is extremely satisfied with the public’s reaction to the competition. “The Cheers to my Land promotion was definitely one of the brand’s most popular initiatives. We could see the level of interest because it was clear that many customers entered multiple times. Some people even decorated their entries so that they would stand out. I’m definitely happy about the impact.”

To enter, patrons collected eight specially made blue Banks Beer crowns, placed them in an envelope together with their name, address, and contact number, and provided the correct answer to the question, “What country is Banks the beer of …” The winning entry was inspected by members of Banks Holding Limited (BHL)’s Internal Audit and Legal and Corporate Affairs Departments to ensure that it satisfied the required criteria.

It's no 'prank' - Flatt excited to be shopping for free