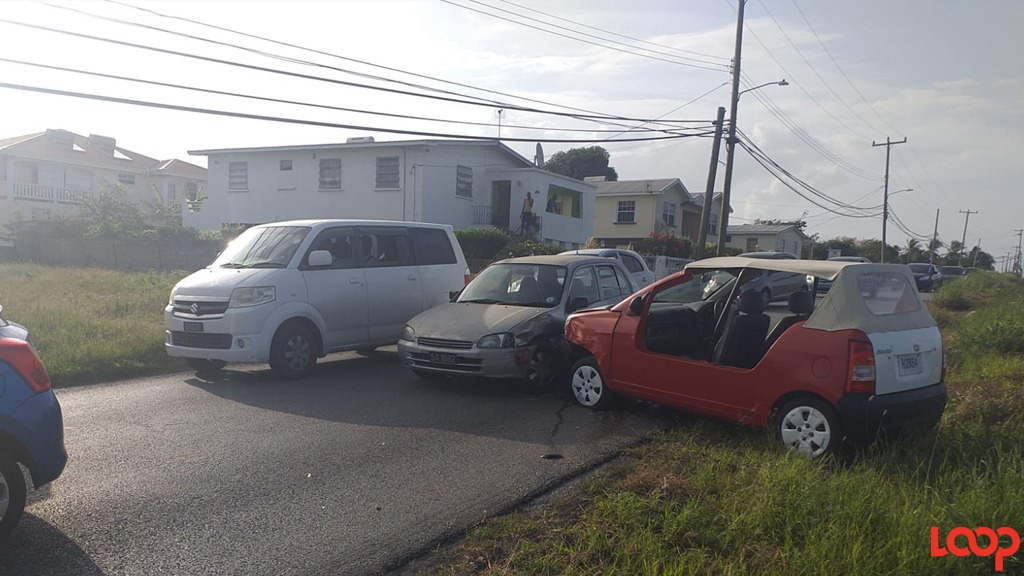 Monday morning accident at the Mangrove junction in St Philip.

Residents of Mangrove in St Philip are still wondering what more can be done with a perilous four-cross junction that again has been the scene of another severe accident.

Yesterday's smash up left the community pressed for answers.

The accident in question involved two Suzuki Swifts, a Toyota starlet and a moke.

Police officials were on the scene quickly. The accident reportedly occurred around 7.50 am, and left three people nursing serious injuries.

Police Public Relations Officer, Acting Inspector Rodney Inniss told Loop News that officers from District 'C' were alerted and went immediately to the scene of the road traffic collision at the junction of Mangrove, Sunbury Road and Market Road, and are still investigating how it occurred. He indicated that the driver and front-seat passenger of one vehicle appeared to have suffered severe injuries, as well as one other driver who was thrown from his vehicle. All three were taken away to the Queen Elizabeth Hospital (QEH).

Onlookers gathered at the scene in moments and lingered even after ambulances had took victims to receive medical attention. It was this lot that offered their thoughts on not only the accident but the junction itself.

Many residents of the area argued for something to be done with the junction as it continually sees accidents occurring. The then Ministry of Transport and Works, now the Ministry of Transport, Works and Maintenance, had previously taken steps to try to curb the number of accidents in the area by altering the secondary roadways. They added humps coming from Market Road and Kirtons to slow down drivers exiting the junction.

However, some residents thought that it may be time for a different solution. Living in the area for some 20 years, one resident said it is time for traffic lights to be installed at the junction.

"For all my time living here, people just fly through the area without checking for who is coming. They need to put lights there. It is the only thing I feel would make a difference."

Others thought it may be best to put a roundabout at the junction but they still feared that it may not be enough to deter drivers from continuing to speed along these St Philip roads.