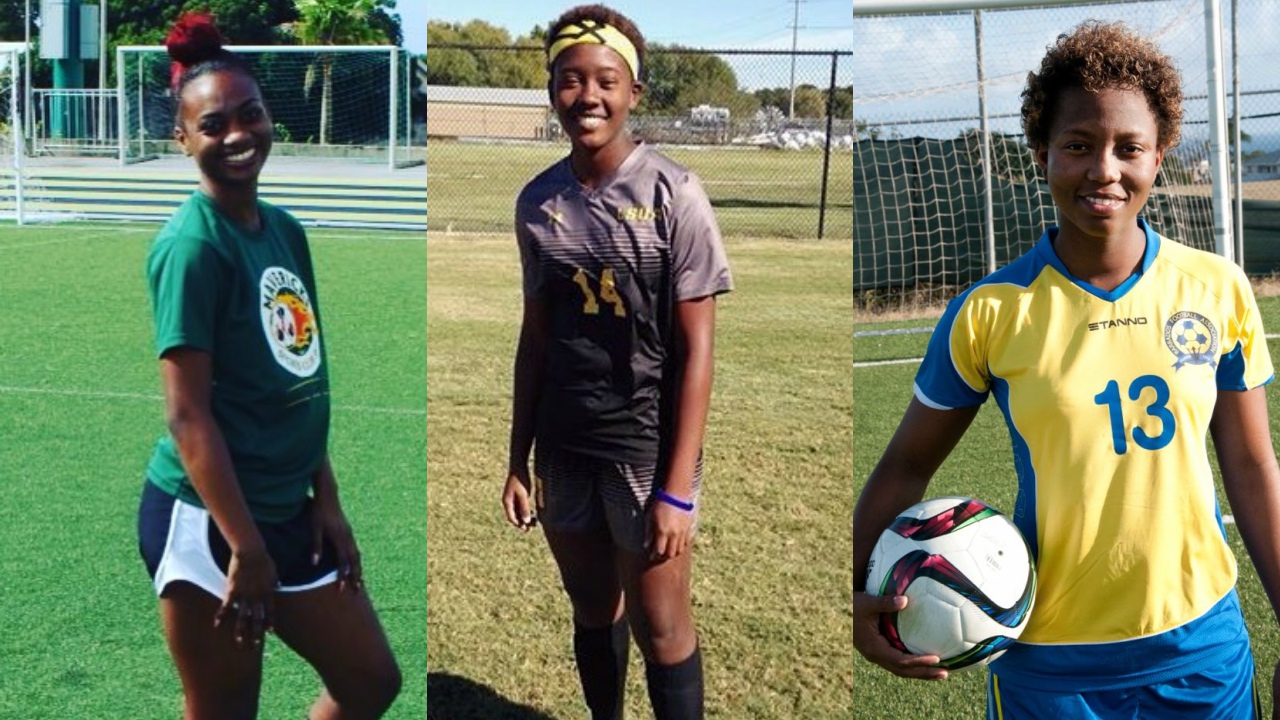 On a day when we celebrate the superhumans we refer to as women, Loop Sports acknowledges and promotes three young ladies who have kicked out prejudice, contemporary thoughts and stereotypical obstacles to follow their dreams and achieve their goals.

Tiffany White, Jeneva Miller and Adrienne Forde, are three young, inspirational and dedicated ladies that have accepted the challenge and triumphed in a male-dominated discipline, while utilizing football as a vehicle to take them to their future.

Loop Sports had a chat with these amazing ladies, who are all on soccer scholarships about their journey thus far.

Loop: How old are you?

Loop: How long have you been playing football?

Forde: since I was 11 years old

Loop: How did you get involved in football?

White: As a young child, my mother took me to watch my father play in the Masters’ League regularly. One day I decided to try playing with the boys at my primary school and I realized it was more enjoyable playing compared to watching.

Days later I told my dad I wanted to play football; he bought me a pair of football boots and signed me up for Kick Start Football Club.

Miller: One day at the Alleyne School my games teacher Mr Headley, told me to come and participate. From there I fell in love with the sport.

Forde: As a young girl, I never played with dollies. I always had a football at my feet. I was just always interested in playing football. 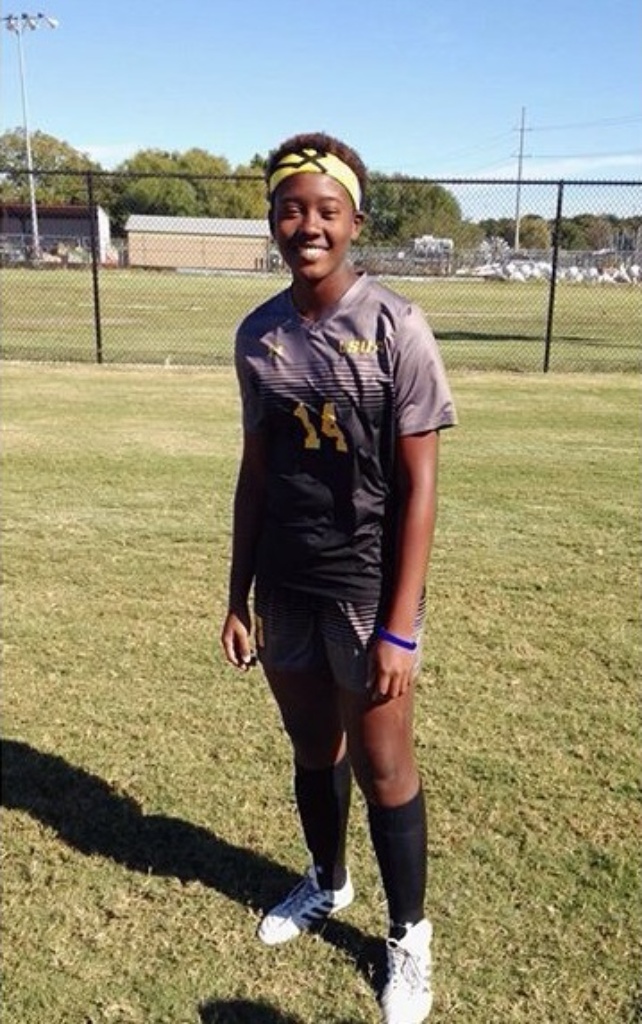 Why did you choose football (a male-dominated sport)?

White: I chose football because I wanted to replicate the movements and goals of the masters. In addition, football was the sport where I made a great deal of progress in a short period

Miller: I chose the sport because it gave me a feeling that this is where I belong. It is unexplainable but instead of me choosing the sport it is more like it chose me.

Forde: I chose to play football because it is my happiness. I am very passionate about it and not only is it my lifestyle, but it gives me the opportunity to express myself.

Loop: What was the response like when you selected football as "thee" sport of choice?

White: My parents and other family members supported me because football was “thee” sport of the family. Besides that, I was told I had potential by coaches but players felt I was not going to last long.

Miller: Some of my family members said it was a male-dominated sport that I’m a female and I should play netball. My mom and my grandmother were okay with the idea at first. What worried them was me injuring myself but they supported my decision from day one.

As time passed they realized that it was my only priority over everything else. One thing they always said was if this is "thee" sport; make sure I get something out of it.

Forde: It was a positive response when I chose football as my dominant sport. I think was mainly because everyone close to me knew the extent of my love for the beautiful game. As a result, I was given encouragement from many persons.

Loop: What school do you go to and what are you majoring in?

White: I currently attend Southern University and A & M College and I am majoring in Civil Engineering

Miller: I currently attend Alderson Broaddus University and I major in Accounts.

Forde: The name of the school I attend is Louisiana State University of Alexandria and I am majoring in Kinesiology 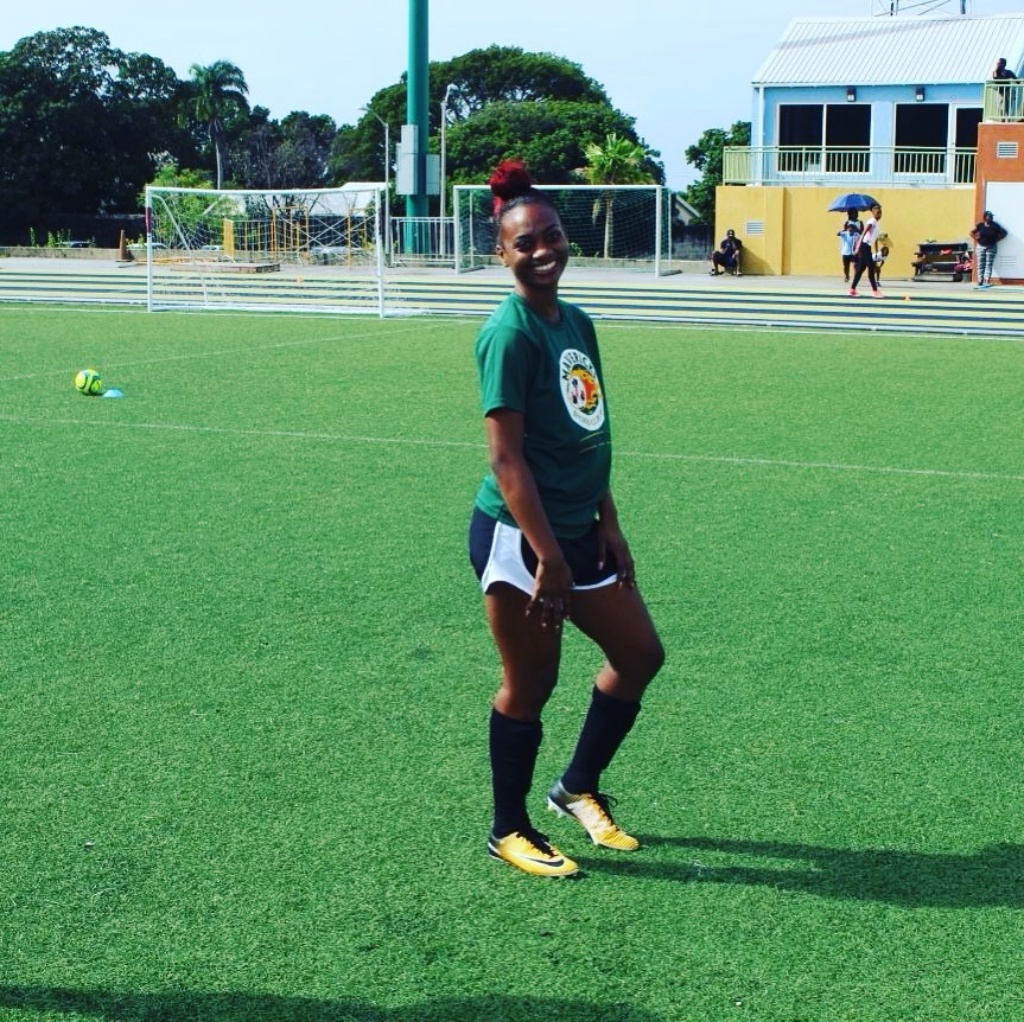 Loop: What are your plans after college?

White: College, I plan to complete my Masters of Science in Environmental and Water Resources and obtain my coaching license. However, I will be exploring the opportunity to play football at another level.

Miller: After college, I am in the hopes of pursuing a professional career in football if that does not work out then I can enter the workforce to be an accountant.

Forde: My plans after college are to play football at the professional level and to use my degree to become an athletic trainer.

Loop: Compare being a female soccer player here in Barbados and one in the USA.

White: Football is more a job than a hobby. Practices are 5 times a week between 5 and 7 am, either gym or on the field, some days practice would be twice a day, my coach also has us practising Saturdays.  Along with practices, we have team and athletic meetings along with study hall requirements.

We are also required as a team to do community work and support other sports teams on campus at least once.

During the season, we travel most weekends from August to November. The shortest distance is 215.7 miles away (4 hours) and the longest 1,154.6 mi (18 hours).While in Barbados, practice is 3-4 times a week on the field and nothing else in your life centres around football besides events like the Barbados Live Your Goals Program.

Miller: Barbados is the place of comfort, it is home to me so I feel comfortable there, but being outside of it, and it’s a lot harder both physically and mentally.

Back home there are limited females in football but in the states you have to compete with millions of girls who you share a common goal with.

Especially on college teams you have to compete with girls who have been playing from 3 or 4 years old and they have a lot more experience than you do.

I’ve been playing from 13, but I still don’t let that limit me to want to be a pro. I’ve been mentally strong so far and I improve daily.

Forde: Being a female football player is definitely completely different here in America than Barbados. It is more competitive and taken way more seriously.

Every practice session is considered a tryout and one is expected to put in 150% effort, unlike Barbados, where training is usually 3 or so days a week.

We usually train every day during the fall semester from Monday to Friday every week for two hours and sometimes go for a few weeks without rest, that is, training on Saturdays and Sundays as well.

During the spring semester, we train on the field on Mondays, Wednesdays, and Fridays whilst we have gym sessions on Tuesdays and Thursday, emphasis is placed on fitness and gym work. Indoor football is also incorporated throughout the week. Additionally, the football experience is different because we travel to other universities to play in our conference matches. These trips range between two hours to fifteen hours of travelling on the bus.

This consists of staying in hotel rooms for a couple days if required, therefore, being a football player is more intense and more is expected of you here than in Barbados.

Loop: What are your views on female football in Barbados socially and athletically?

White: Female football in Barbados is not a spotlight socially due to many factors. However, more girls are becoming more aware of the sport and the participation is increasing which is boosting the sport athletically. Because different players have different playing styles increasing the competition

Miller:  I think that recently our football has shown tremendous improvement.

Playing countries like Martinique, St. Lucia, Grenada and others, the results are better than previous times.

Barbados Senior Women can be and will be successful without a doubt. It may not be right away t but it is currently a work in progress.

Additionally, we’ve gain a lot more supporters; we’ve proven that we are serious in moving forward.

Our downfall comes into play where female football is not thought as permanent but temporary especially when tournaments approach.

I think that we don’t have girls from a younger age to say they want to play football when they get older because it is not advertised the way it should be or the grassroots program is not as successful because after the program there is no other development for them.

It is not taken as seriously, because you hear from a young age that football in Barbados gets you nowhere or a lot of negative comments. If we could find ways to motivate and show females that it does get you somewhere then we could change the way other people view football.

Forde:  I think that there is a still a stigma that encompasses female football and it is still not considered a sport that "girls' should play. This hinders some players from being more involved. However, there has been a small increase in the knowledge and participation for younger female footballers. 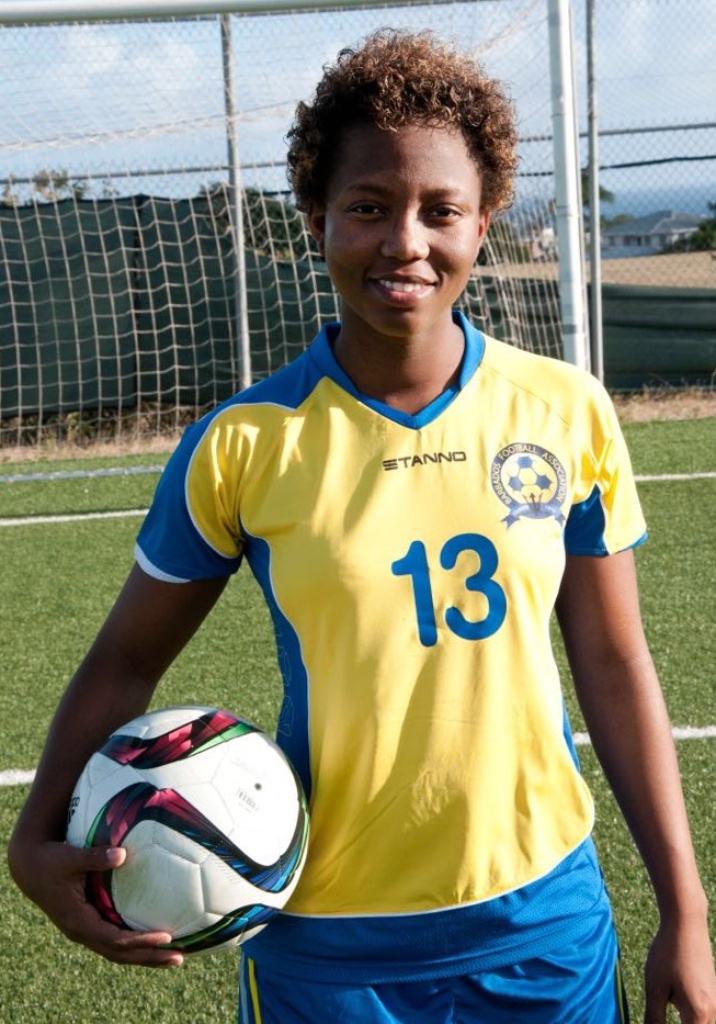 Loop: Do you find that there is equality among sexes in the sport locally?

White: There is no equality in the sport locally.

3.       The women’s national team only trains when competition time is close

4.       Rarely any friendly matches with other islands

5.       The women receive the hand-me down or left over clothing

6.       Women’s football is not taken seriously by the governing association

Forde: No, there is not equality. Female footballers, especially in the past, do not receive enough support and funding from the Barbados Football Association.

This therefore has a backlash on the availability to get experience by traveling. There are hardly any incentives to play as well such as clinics which cater to younger female footballers as opposed to male footballers

Loop: Are there any particular female players you look up to? If so why?

White: During the 2011 FIFA Women's World Cup Competition, I watched France compete in a group stage match. The one person that caught my eye was Louisa Nécib Cadamuro; she orchestrated the plays and used her dribbling abilities wisely. Since then I have been trying to replicate a similar playing style.

Miller: One female I look up to is Sydney Leroux. The way she plays inspires me to want to go further than the college level.

Forde: The two female footballers I look up to are Marta Silva who is a Brazilian and Louisa Cadamuro who is from France.  They are very talented footballers with good vision but they also are instrumental and expressive leaders on their respective teams. They also have a tenacious desire to succeed.

Loop: What would you say to young female players in Barbados?

White: The path to success is not easy, keep your head high.

I did it so you can too.

Miller: I would say that football is not a male-dominated sport. There are no limits to what you achieve in football. If it is the main thing you love then you do everything you possibly can to get what you want out of it. It is never going to be easy but keep pushing and never give up.

Forde: I would encourage female players in Barbados to aim for a scholarship to come overseas. It will open many doors and afford you the opportunity to make many memorable memories and experiences.

Be prepared to work hard both at football and especially academically. I cannot stress how important academic excellence is. No matter how good you may be at soccer, if your academics are not up to par, this could be detrimental.

Loop: List three words to describe you as a female and a footballer