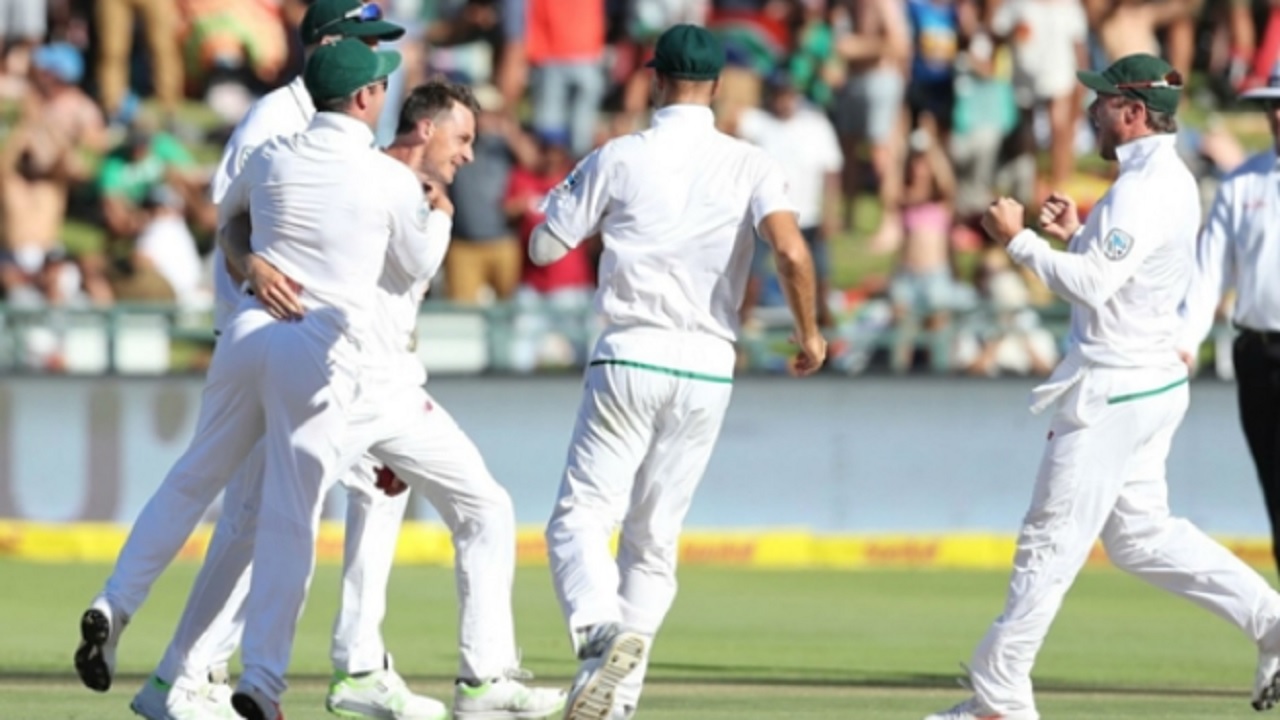 Dale Steyn marked his long-awaited return to international cricket with a wicket as India ended day one of the first Test three down, losing Virat Kohli cheaply after Bhuvneshwar Kumar helped bowl South Africa out.

Bhuvneshwar took 4-87 at Newlands as the Proteas were dismissed for just 286, despite an impressive fourth-wicket partnership of 114 between AB de Villiers (65) and Faf du Plessis (62) and some late resistance from the tail.

But India's hopes of earning a first-innings lead were dented as Murali Vijay (1) fell to Vernon Philander and Shikhar Dhawan (16) was caught and bowled by Steyn as the quick finally resumed a Test career derailed by injury.

Playing in his first Test since November 2016, Steyn's dismissal of Dhawan moves him on to 418 wickets, just three behind the Proteas' record-holder Shaun Pollock, who is ninth on the all-time list.

Further joy was to come for the raucous Cape Town crowd as Morne Morkel removed captain and dangerman Kohli (5) with his first ball, India closing on 28-3 and leaving Cheteshwar Pujara and Rohit Sharma with the sizeable task of rescuing their reply.

It was a miserable end to a day that started so well for the tourists, Bhuvneshwar needing only three balls to dismiss Dean Elgar for a duck as he edged behind, Hashim Amla (3) doing the same after the seamer had trapped Aiden Markram lbw for five.

South Africa were left reeling on 12-3, but the experienced combination of De Villiers and Du Plessis steadied the ship, hitting 23 boundaries between them before Test debutant Jasprit Bumrah drew an edge on to the stumps from the former.

Du Plessis soon followed but a 40-ball 43 from Quinton de Kock, in which he found the rope seven times, and useful contributions from Philander (23), Keshav Maharaj (35) and Kagiso Rabada (26) pushed South Africa to a total nearing respectability.

And any joy India had taken in keeping the hosts under 300 soon evaporated. Vijay, having survived an ill-judged lbw review, was caught at gully by Elgar as he chased a cover drive, and Dhawan paid for a similar poor shot four balls later.

The opener spooned an attempted pull high into the air and into the waiting clutches of Steyn, who now has a place in Proteas history firmly within his sights.

Yet, while that wicket carried the greater significance in terms of sentiment, the more important dismissal in the context of an already engrossing contest came when Kohli nicked Morkel behind, swinging the day firmly in favour of South Africa, who can now attack the middle order with gusto on day two.

THE ASHES: Smith celebrates milestone to put Australia on top

THE ASHES: Australia land double blow late on day one in Sydney