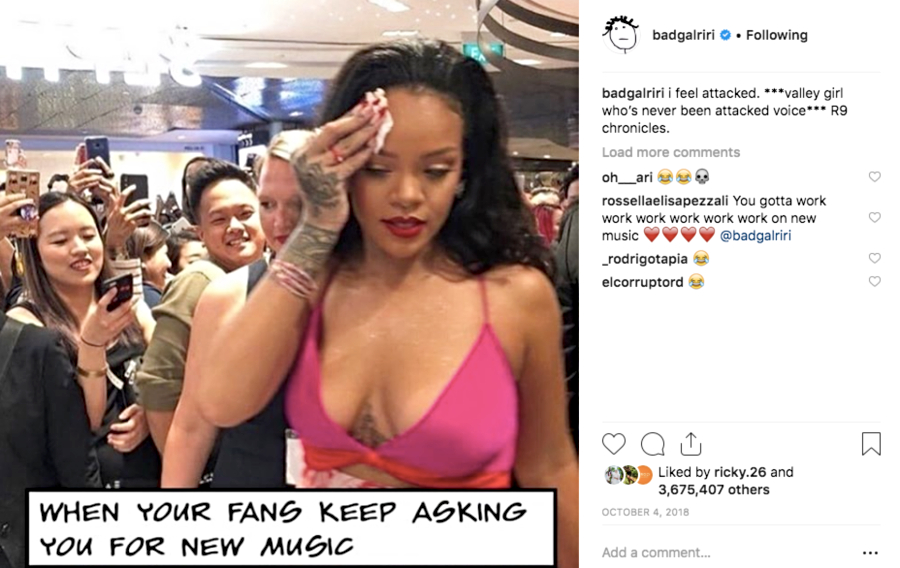 Rihanna "sweating" under the R9 pressure.

Rihanna fans may have been holding out hope that the Grammy-award winner would bless the world with an album this year, but the chances are looking slimmer by the day.

With 19 days left in 2019 and in this decade, that Rihanna suspense just won't let up as it relates to R9.

However, the pop superstar has scored an incredible payday from Amazon, which landed worldwide rights to a Peter Berg-directed documentary about her.

Previously in 2019, Rihanna's Savage x Fenty show was released as an Amazon Original, and she co-starred with Donald Glover in the Amazon Studios film Guava Island.

The documentary is still unnamed at present, but Berg has dubbed it an unfiltered look into Rihanna's life, providing a glimpse into the evolution of one of the world's most well-known pop artists.

With access to the singer's life and more than 1,200 hours of footage, the doc offers private insights into Rihanna's personality, sense of humor, work ethic, family and love.

Berg and Rihanna have worked together previously on Universal's Battleship.

Rihanna stans on Twitter are still frustrated that the year is almost over without a follow-up to Album of the Decade contender, ANTI.

The megastar is not immune to her fans harping for another album, she has even laughed at herself sweating as she acknowledged her fans' frustration. She at least has a sense of humor about it: "We want the album sis," a fan commented on one of Rihanna's Instagram posts in April. "Well this is bronzer," she replied.

But she has not been sitting idly around, she has been on the big screen and has had huge success with her Savage x Fenty lingerie line, the luxury Fenty fashion house, and Fenty Beauty.

Barbadians and fans the world over are sure to support the new venture and congratulate her in spite of their longing for new music over a new movie.

Koffee on Rihanna collab: 'I think something is coming'

2019 has been 'overwhelming' for Rihanna