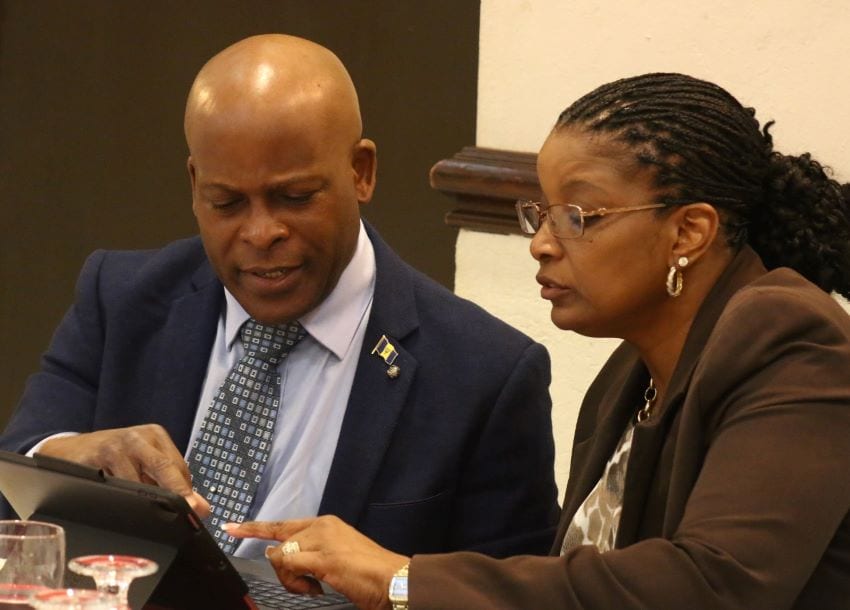 Minister of Home Affairs, Edmund Hinkson, and Manager of the NCSA, Betty Hunte.

The National Council on Substance Abuse (NCSA) supports government’s initiative to legalize and create a platform for the issue and handling of licenses for medicinal cannabis and its regulating regime.

Minister of Home Affairs, Edmund Hinkson, made this disclosure as he addressed the NCSA’s strategic planning retreat at the Savannah Beach Hotel this morning.

“This is what a large segment of the public has been calling for, for years. People who are ill and people with disabilities…and we can’t go against that tide.

“We can’t allow the conservatism and sometimes fear and uncertainty to venture into innovative enterprises or initiatives, which constrain some Barbadians, to prevent us moving on in terms of what would be in the best interest of our people,” he contended.

Hinkson said full discussions by the Joint Select Committee of Parliament had wrapped up with tremendous input given from the public orally and in writing.

He added that the NCSA had also made an input into discussions hosted by the Joint Select Committee of Parliament.

“We want to thank the public and organizations for that input which has helped fashioned amendments to the Bill which would be laid very shortly in Parliament as the debate continues,” the Minister stated.

Meanwhile, the NCSA’s Chairman, Hadford Howell, said while the agency supported the move, it still advocated against substance abuse or misuse.

“[In terms of] medical marijuana, we are happy for it to come into being once it is martialed, controlled and there are certain rules and conditions…put in place. Once they are in place, [then] fine. The point is there is a difference in medical marijuana and recreational marijuana,” he stressed, noting the NCSA had submitted a paper to the Minister of Home Affairs on October 17, 2018, expressing its concerns about the matter.

Mr. Howell said Government was closer to a position to guide them in the regulations needed for its implementation.