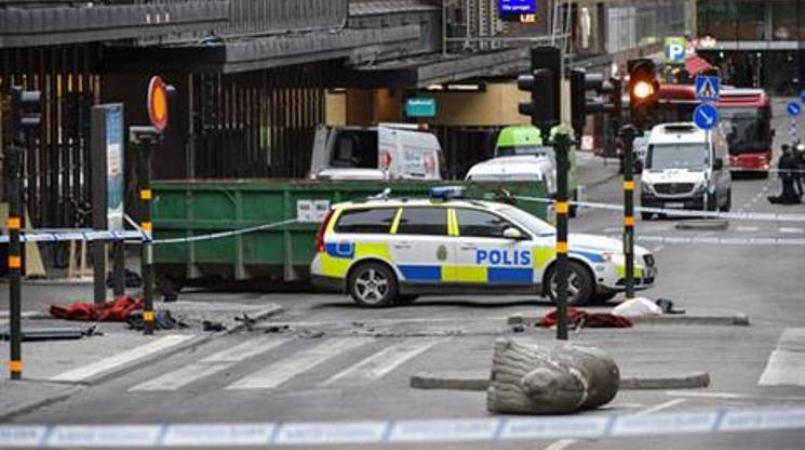 Swedish police said Saturday that they believe they have arrested the driver of a hijacked beer truck which killed four people and injured 15 others on a busy street in the Swedish capital.

"Yes, it is correct, it is likely him," police spokesman Lars Bystrom told The Associated Press. He declined to comment on Swedish media reports that the suspect was a 39-year-old man from Uzbekistan.

There was no immediate claim of responsibility for Friday's attack.

Earlier, prosecutor Hans Ihrman said a person had been formally identified as a suspect "of terrorist offenses by murder," and should face a pre-trial custody hearing before midday Tuesday or be released.

Bystrom would not confirm or deny media reports that police had found a bag containing explosives in the truck. "We do not comment on what we have seized," he said.

Sweden's health service raised the number of people being treated in hospitals for injuries to 10. It said two were in intensive care, four were seriously injured but the one child was not seriously hurt. Earlier, Karolinska Hospital had reported nine people were still in the hospital.

The gray Stockholm skyline was dotted with flags flying half-staff on a cool morning where a few people walked the quiet streets near the scene of the truck attack.

Jogging nearby, a couple from the southwestern city Goteborg had come to spend a "quiet weekend" in the Swedish capital and were shocked by the attack, Carina Lindstrom said.

"I just could not believe this sort of thing would happen, not here in Stockholm and Sweden," she said.

Her husband, Joachim Lindstrom, disagreed: "It was not unexpected. I'm not surprised at all. It was just a question of time."

The stolen beer truck traveled for more than 500 yards (meters) along a main pedestrian street known as the Drottninggatan before it smashed into a crowd outside the upscale Ahlens department store about 3 p.m. Friday.

It came to rest in the entrance to the building. TV footage showed smoke coming out of the store after the crash.

"People were screaming and running in all directions," said Brandon Sekitto, who was in his car nearby. "(The truck) drove straight into the Ahlens entrance."

"I saw the driver, a man in black who was light around the face," Brandon told Swedish daily Dagens Nyheter. "Some women were screaming, 'Run! Run!'"

Prime Minister Stefan Lofven said on Friday that the attack "indicates that it is an act of terror."

Later Friday night, Lofven laid a bouquet of red roses and lit a candle near the site.

"The country is in a state of shock," he said. "The aim of terrorism is to undermine democracy. But such a goal will never be achieved in Sweden."

FEATURED IMAGE CAPTION: A concrete traffic stopper called "Stockholmslejon" lays in its side outside the cordoned off area next to the department store Ahlens following a suspected terror attack on the Drottninggatan Street in central Stockholm, Sweden, Saturday, April 8, 2017.