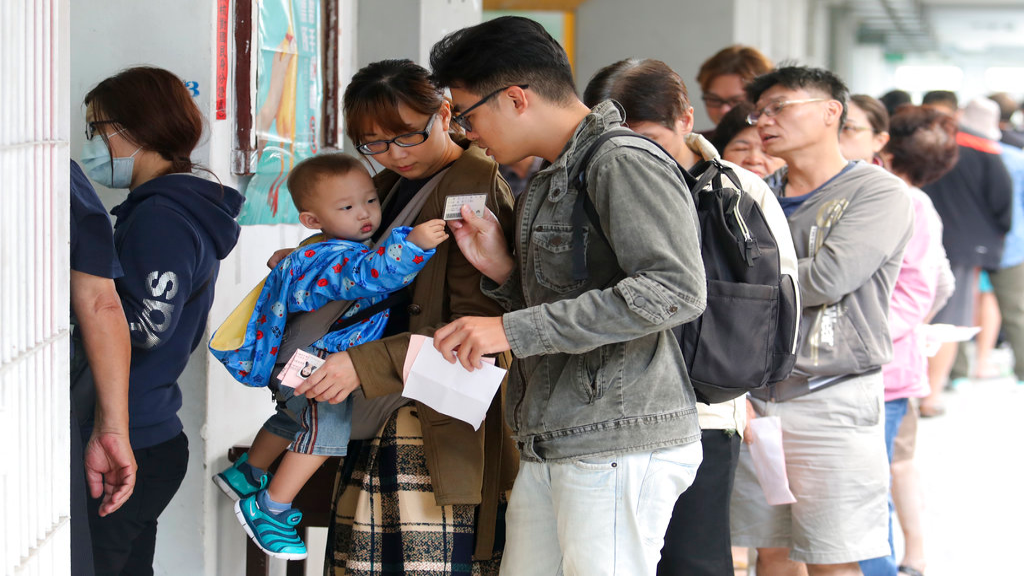 Voters line up at a ballot station to vote for the city mayor in Kaohsiung, Taiwan, Saturday, Nov. 24, 2018. Taiwanese began voting in midterm local elections Saturday seen as a referendum on the independence-leaning administration of President Tsai Ing-wen, amid growing pressure from the island's powerful rival China. (AP Photo)

Taiwan's ruling party suffered a major defeat in local elections Saturday seen as a referendum on the administration of the island's independence-leaning president amid growing economic and political pressure from China.

President Tsai Ing-wen's Democratic Progressive Party lost the mayoral election to the Nationalist party in the southern port city of Kaohsiung, where the DPP had held power for 20 years. The Nationalists also defeated the DPP in the central city of Taichung, while Ko Wen-je, the independent mayor of Taipei, the capital, appeared on track to win a second term.

Tsai and the DPP had won a landslide victory in 2016, but China swiftly responded by cutting all links with her government. Beijing has been ratcheting up pressure on the island it claims as its own territory by poaching away its diplomatic partners, cutting official contacts and staging threatening military exercises.

The Nationalists, known also as the KMT, had campaigned on their pro-business image and more accommodating line toward Beijing.

Since her election in 2016, Tsai has walked a fine line on relations with China, maintaining Taiwan's de facto independent status that the vast majority of Taiwanese support, while avoiding calls from the more radical elements of her party for moves to declare formal separation from the mainland.

Taiwanese officials had warned that Beijing was seeking to sway voters through the spread of disinformation online similar to how Russia was accused of interfering in U.S. elections.

Chiang Kai-shek's Nationalists rebased their government to Taiwan in 1949 amid the civil war with Mao Zedong's Communists. They ruled under martial law until the late 1980s when the native Taiwanese population began to take political office, mostly through the DPP.

WHAT TO WATCH: Voters to go polls to weigh in on Trump era

Brazil votes amid anger at the ruling class