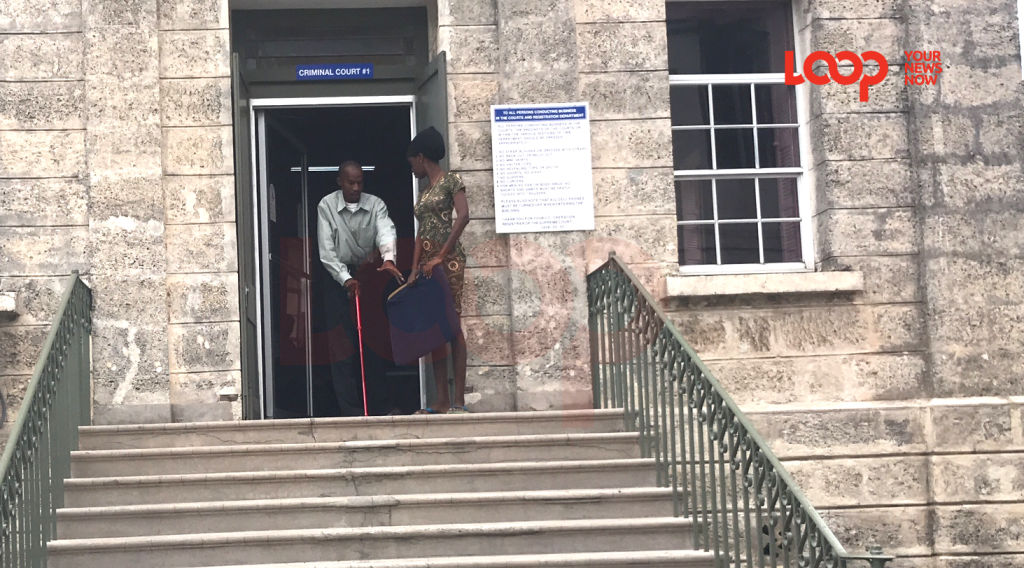 Carl Hinds accompanied by his wife

Four charges have been laid against the taxi operator who collapsed spreadeagled outside the main entrance to the Bridgetown Sea Port.

2) Use of abusive language, saying: "You don't know the r***hole what you now f**king well do. You is a stinking dog."

4) Did not leave the premises of the Bridgetown Port when instructed by Constable Kerwin Greene who had authority to do such.

The charges were all in relation to one incident which occurred yesterday, March 9, 2020, outside the Bridgetown Port.

He pleaded not guilty to all charges.

The prosecutor did not object to bail but asked for some conditions, namely that he avoids the Port, Constable Greene and that he reports to a police station.

However, Magistrate Frederick challenged the request to have Hinds stay away from the Bridgetown Port area, noting that he makes his living through that avenue.

Hinds pleaded that he must be allowed near the Port because of his business. He said he is not an authorized port taxi but he sends through correspondence in writing to the Chief of Security and then is granted access at the gate. He said that as soon as Saturday he has bookings with persons on a cruise ship. "People book with me," he argued as he made his case to not have his access restricted.

Acknowledging "there is a process" and saying: "I do not want to restrain his way of making a living," Magistrate Frederick ordered him to stay away from the Port unless authorized and to stay away from Constable Greene.

The Magistrate also overturned the Prosecutor's request for Hinds to report to a station because he wanted to reduce the likelihood of Hinds running into Constable Greene. He told him not to turn up at a police station unless he has a legitimate reason.

His wife acted as his surety and his bail was in the amount of $2500.

On leaving the Court, walking with his cane and heavily leaning on his wife, Hinds tried to hide his face from the media with a cushion cover as he made his way painstakingly slowly down the Court steps, across the yard, under the arch, and off the premises.

VIDEO: Man charged in relation to incident at Sea Port gets bail