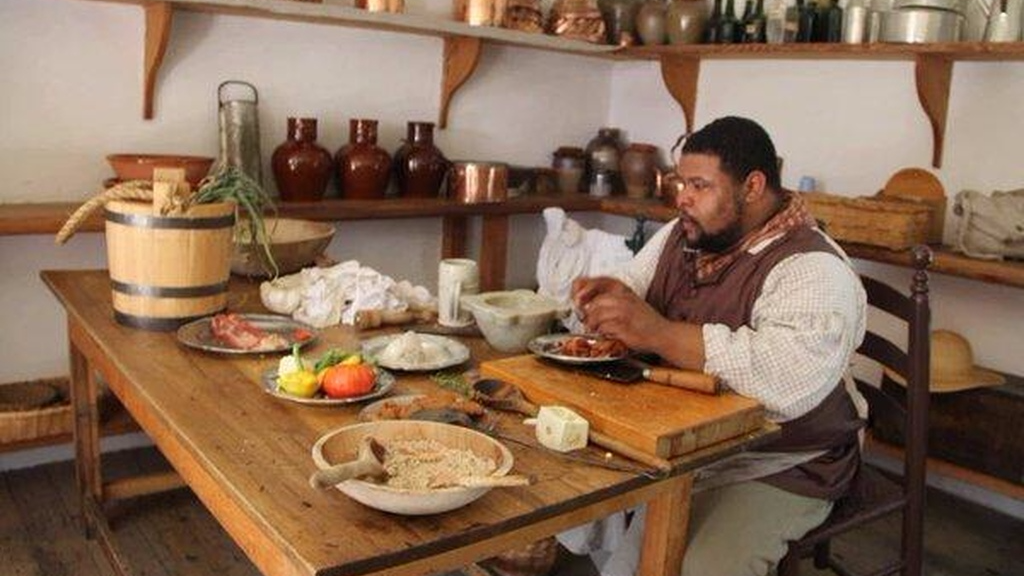 An iron pot warmed over the fire waiting for the African American cook to pour in the stock. A spider pan, to stand above smouldering coals, would be for sauteing the onions, celery and diced carrots to season and thicken the meal.

During a recent living history demonstration, the three people had a story to tell, and it would begin with black-eyed pea soup.

Michael Twitty, a culinary historian and the cook for the day, sorted out his ingredients in the outdoor kitchen behind the Peyton Randolph house.

The stock was pre-made and vegetables pre-chopped because Twitty, the first in Colonial Williamsburg's "Revolutionaries in Residence" program, was cooking an authentic period dish but had another demonstration on the schedule.

Still, Twitty is all about authenticity, from the spices he was using to the cloth pants and vest he was wearing.

"They gave me stuff in plastic, and I don't know what plastic is," he mumbled as a few onlookers crowded into the kitchen.

"And that magic thing you have," Twitty said, looking at a man holding a camera. "I don't know what that is. Who you be?"

As the kitchen filled with the smells of collard greens and cloves, people would learn who Twitty is and the story he feels he must tell.

Twitty, 40, is an award-winning blogger and author, and an international speaker about his work in promoting African American foodways and their origins in Africa and their transformation through the Diaspora.

Not many chefs can rage against myths, falsehoods and the status quo, and make people hungry at the same time. Twitty does, deliciously.

He preaches about culinary justice: Why have so many white Americans capitalised on the recipes and techniques that were passed down by black cooks who never got the credit? Why do blacks in the Sea Islands off South Carolina's coast have to give up the lands on which they fished and grew wholesome foods for centuries for resort development? How do we as a society teach young people that cooking and gardening, mainstays of the past, could be viable careers for their futures?

His sermons include names like Southern cook Paula Deen, Diana Kennedy - who has been called the Julia Child of Mexican cooking - and Rick Bayless, an American who has created an entertainment and food brand based on Mexican cuisine.

"When was the last time you saw a Mexican American with a Ph.D. in his or her culture running a multimillion-dollar restaurant empire not selling garbage food to Americans but actual gourmet foods ... showing the gloriousness of the Mexican table?" Twitty asked while cooking. "No, you have Rick Bayless and Diana Kennedy repping Mexican food. That's what I'm talking about. People of colour get told all the time, why don't you get a job? Why don't you work hard? ... When the culinary field became something you needed a degree for, they kicked all the black folks out of the kitchen."

Colonial Williamsburg developed the Revolutionaries in Residence program to bring in modern thinkers to add to the country's complicated history on display in the living museum. Twitty will come to the former Colonial capital throughout the year for cooking demonstrations and lectures, and to check on a garden he created for his cooking. He has also developed dishes that are being featured in several local taverns.

Twitty will be in Williamsburg for five days.

CW's president and CEO, Mitchell Reiss, said in a statement that Twitty was an easy pick as the one to launch the program.

"I can think of no one better suited to begin that journey than Michael Twitty, who illuminates huge aspects of our shared history that too often have been overlooked."

Twitty grew up in the Washington, D.C., area in a neighbourhood of various ethnicities and faiths; his mother bought Jewish challah loaves from the local bakery. Twitty gained such an appreciation for Judaism and he converted as an adult. He taught at a Hebrew school and now cooks matzo-meal fried chicken and barbecued brisket.

He also grew up with the stories of his families, the people who were enslaved in the South and after emancipation eventually migrated to the North for better opportunities. Several ancestors have roots in Virginia.

Twitty was always interested in food (he often points out that he's "healthily built"), but he also was curious about history. He focused on Afro-American studies and anthropology at Howard University and then set out on his own discovery. Twitty learned authentic antebellum cooking; he learned how to pick cotton and did so on various former Southern plantations to know what it was like for his ancestors, as recently as his father's generation, to do the back-breaking work.

In 2011, he started "The Cooking Gene Project" to explore the evolution of certain dishes through his genealogy from Africa and Europe to the South. He traced his lineage and set out on a " Southern Discomfort Tour" to go to places his ancestors lived, including the white families that owned his ancestors but were also related to them. He cooked throughout the South, inviting people to eat and drink authentic fare in order to discuss the history that makes so many people uncomfortable.

"If communication doesn't work," he said. "You feed them."

Those experiences will be released in his book "The Cooking Gene" in August. Twitty also created a blog, Afroculinaria, where he posts about his travels and in 2013 wrote what launched him into the international sphere.

In 2013, Deen, the popular Georgia cook, faced an avalanche of criticism after she revealed in a court deposition that she had used a racial epithet. She later lost her cooking show on the Food Network and her partnership with Smithfield Foods .

Twitty took to his blog and wrote Deen an open letter. He told her he wasn't surprised by her language. He was shocked that America was surprised. No, he said, he had another issue with her.

"Don't forget that the Southern food you have been crowned the queen of was made into an art largely in the hands of enslaved cooks, some like the ones who prepared food on your ancestors' Georgia plantation," he wrote.

"Your barbecue is my West African babbake, your fried chicken, your red rice, your hoecake, your watermelon, your black-eyed peas, your Crowder peas, your muskmelon, your tomatoes, your peanuts, your hot peppers, your Brunswick stew and okra soup ... have inextricable ties to the plantation South and its often Black Majority coming from strong roots in West and Central Africa."

He then invited her to cook with him at a former plantation. Deen never responded, but the letter was picked up by news outlets, shared on social media and read around the world.

Twitty soon had thousands of followers on his social sites, and his blog became an award winner. Twitty was invited by the TED organisation to join its slate of 2016 fellows. He has lectured from Oxford, England, to Oxford, Miss.

He shared the stories as he stirred and tasted his soup on a recent stop in Williamsburg. The kitchen smelled of collards and peas.

Twitty and Harold Caldwell, a historical interpreter working alongside him, said a difficult part of their roles as historians is to deal with people who question them, even though the two can dish out details as easily as picking up a salt bowl. A few people resist knowing the influence of Native American culture on foods, like shrimp and grits, and the fact that enslaved Africans cultivated corn in Africa long before coming to America. And, yes, blacks had access to seemingly exotic peppers and spices in Williamsburg, because of the bustling city's trade.

Caldwell and Twitty said that when Africans were brought to this soil, they scrounged and looked for plants and herbs that looked like the ingredients they'd used in their homeland.

"It's all about the strength and the will to live," Caldwell said. "It's exactly the American story."

Twitty said that while he concentrates on the African Diaspora, he ultimately wants people to see how Americans are connected.

"White people say, 'I eat that food, too, does that make me black?'?" Twitty said, mimicking the mocking tone some people have used with the question.

"Yes, actually it does, and maybe that's a line I need to say for you: 'This makes me part of African civilisation.' Absolutely! It makes you part of a larger story that is not bound by the boundaries of the United States."

Bowled over with food at 519