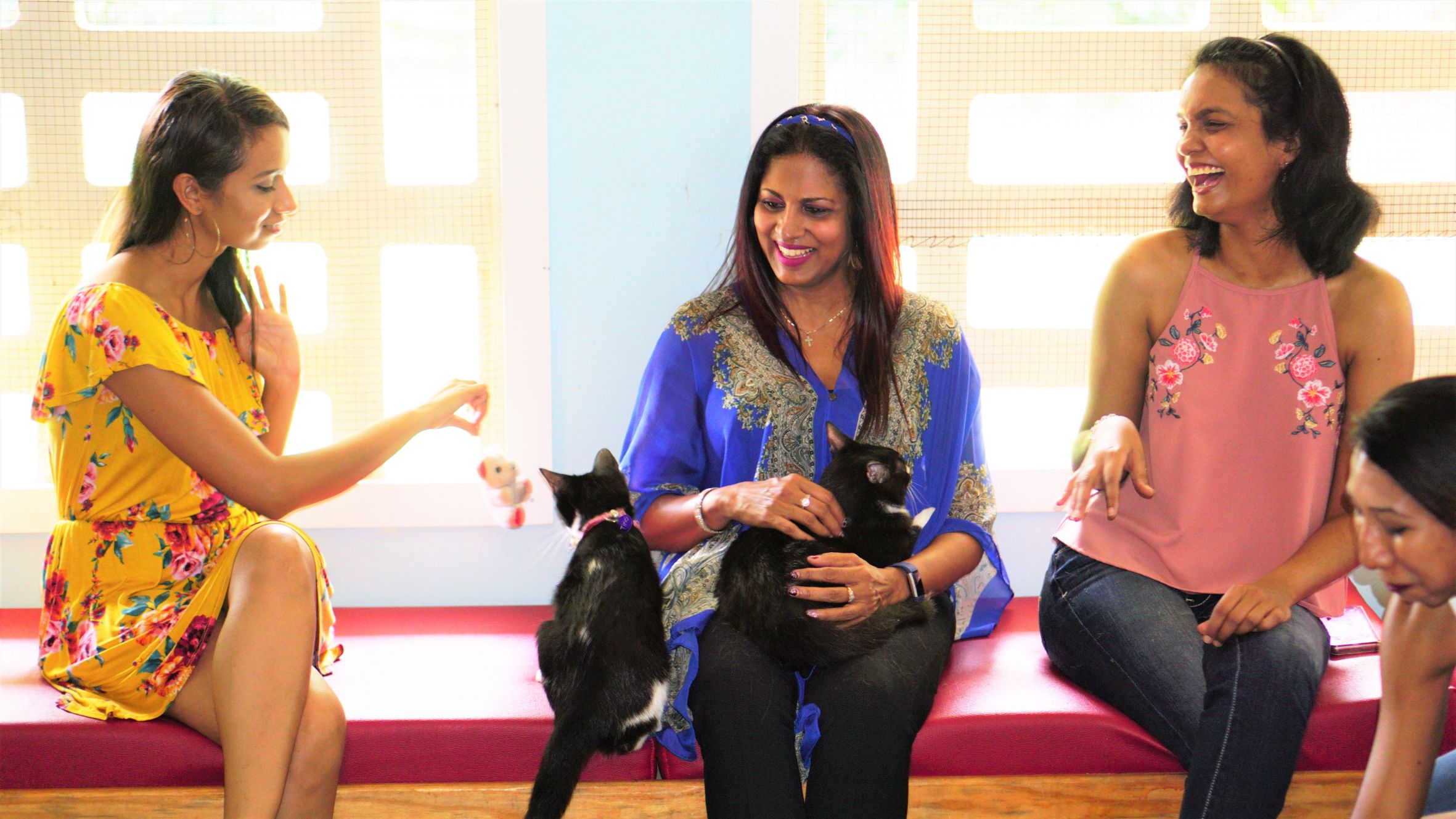 Cat cafés have taken off in the US, Europe and Japan and now Trinis will be able to cuddle, care for and perhaps even adopt some of these furry felines at a local cat café in St Augustine, Trinidad.

The veterinary clinic and cattery, owned and operated Drs Wade Seuk­er­an and Car­olyn Mike of Ten­der­heart An­i­mals in St Au­gus­tine, is part of an attempt to get people to learn more about cats and help find homes for cats who were taken off the streets and rehabilitated.

Dr Seukeran said despite the best efforts of local NGOs and supportive citizens, the number of stray cats is growing, and people are resorting to cruel measures such as poisoning and killing them.

Having practised for 25 years, Dr Seukeran said the idea just evolved naturally after they created a space for cats at the clinic’s location in St Augustine.

“It kind of evolved on its own, we always focus on showing compassion and care, that’s why our veterinary clinic is called Tender Hearts Vet Clinic.”

He said the clinic initially started off as a home for the Trinidad and Tobago Marine Mammals Stranding Network, where they would receive calls to rescue stranded dolphins.

They began receiving many calls about stray dogs and cats and he said there were so many calls, it became disheartening.

“There are so many stray dogs and cats and we got many requests to help out with them, it came very depressing. It hurts that we weren’t able to do very much as we didn’t have the capacity to hold many strays at our facilities, and people whose pets we cared for would tell us that they had a box full of kittens and they wouldn’t be able to care for them for various reasons.” 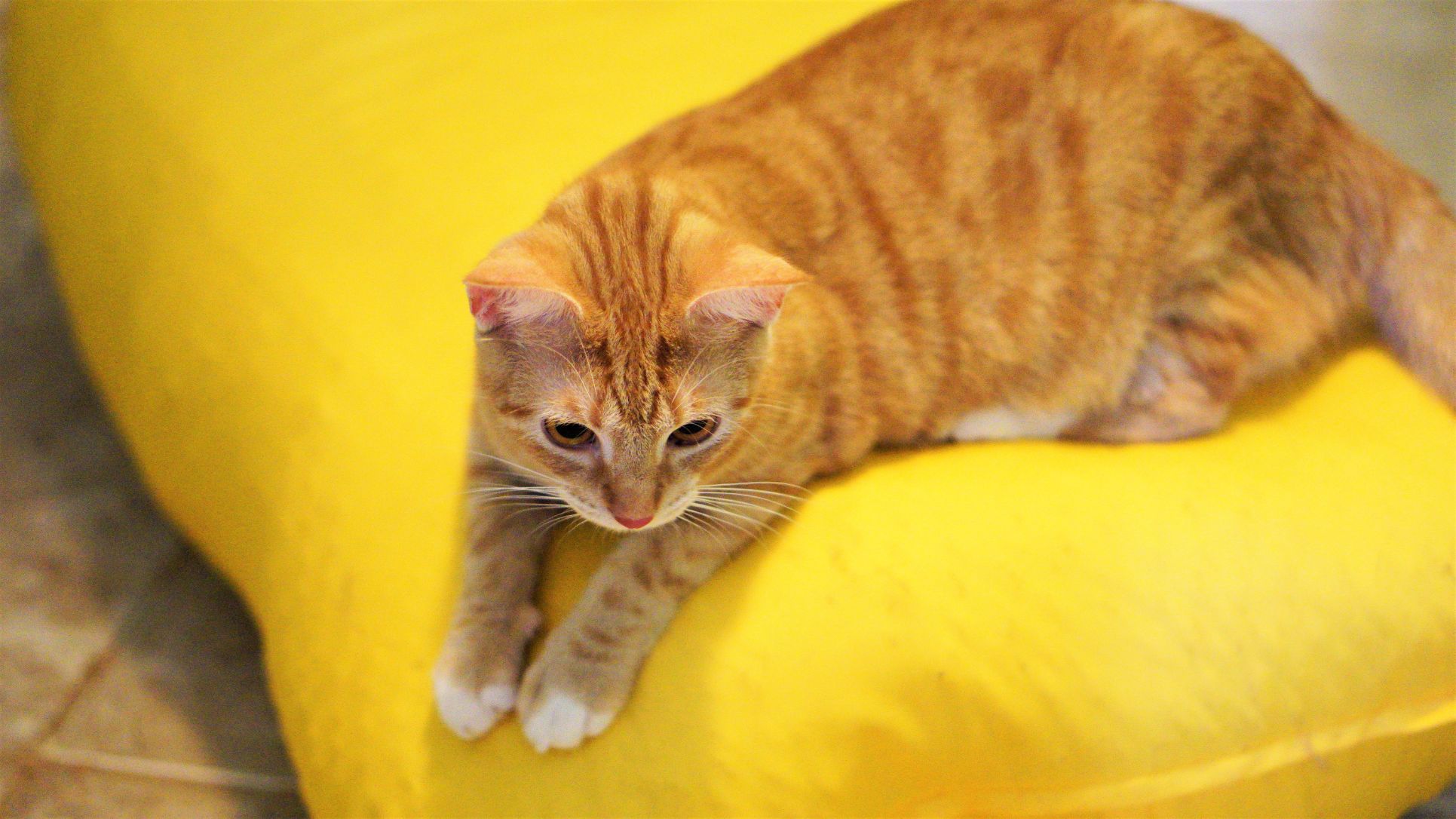 “We realised that pets in general have it really hard in Trinidad, and the people who try to fix these problems, for example the rescue organisations, vets and everyone who tries to care for them, the resources are not enough, and they aren’t able to properly tackle the problem, the animals are multiplying too fast,” he said.

He said eventually they put aside a space for the kittens, who began bonding with each other and others who visited them. And so, the idea for the café was born.

“It just happened that I had some extra space at the clinic and we decided let’s keep a few of these kittens and let’s try to get them adopted. Little by little we fixed up the room until it became pretty much a cattery, a space perfect for cats.”

“The people who brought the cats also didn’t want to take them to shelters, so we made an agreement that if they brought supplies we would try to get them adopted.”

“Eventually we got 10 of them and the cats liked each other and became a colony. They became like a group, and they really like each other and the people who come to see them.”

He said what they saw was both surprising and beautiful.

“I really didn’t expect to see what I saw after a couple of weeks, they became so loving and welcoming. When people came to see how they were going and others came to visit, the response was so overwhelming, people were like ‘wow I didn’t know they could be so friendly’, it was an eye-opener for a lot of people.”

He said for people who are lonely, such as the elderly, this can also be a great therapeutic space.

“We all know that bonding with animals can be very therapeutic and I realised there’s a lot of potential here.” 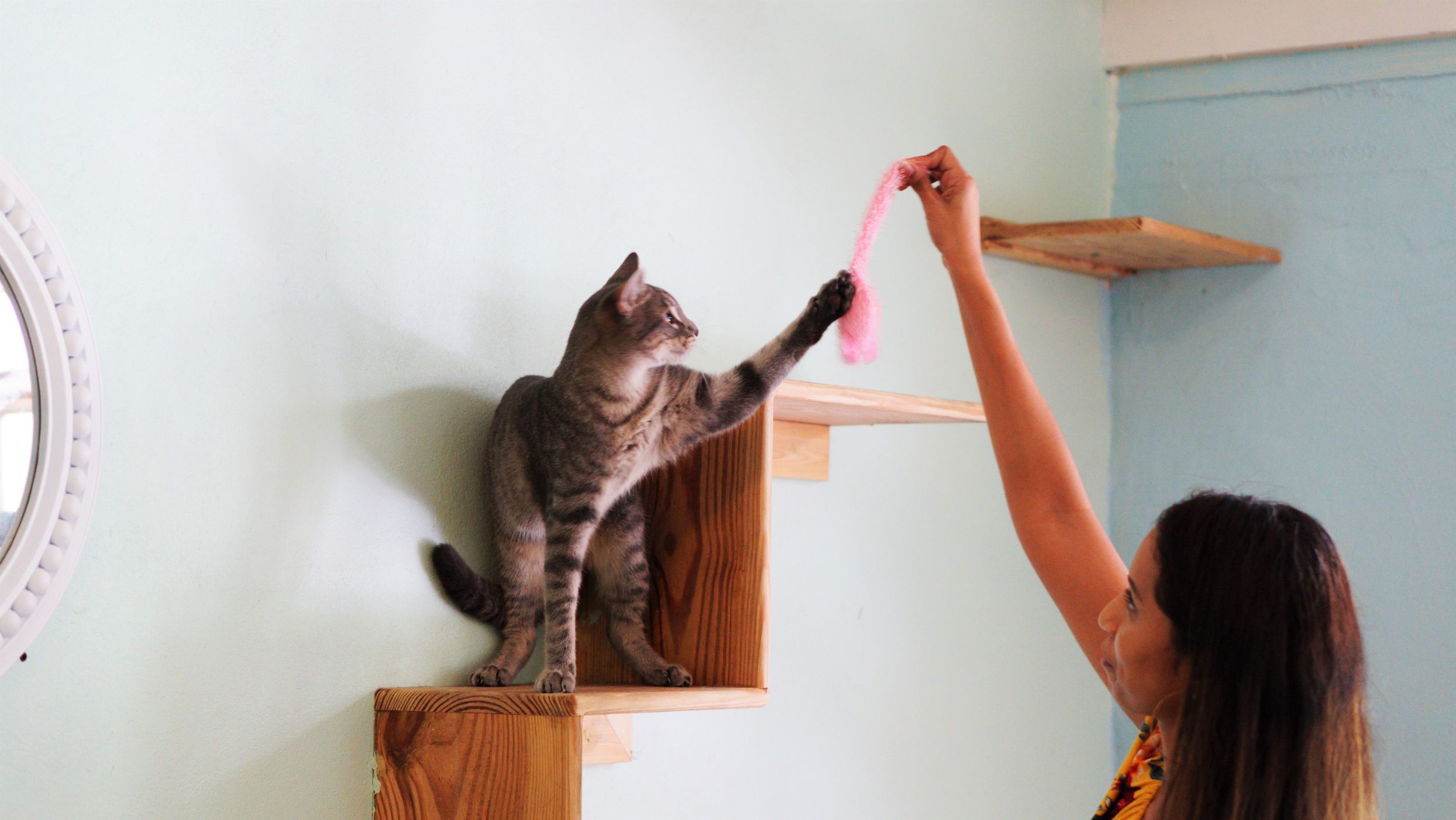 Dr Seukeran said many Trinis don’t like cats and view them as pests, which is one of the ideas he wants to tackle with this new café.

“I would hear people say ‘I hate cats, I’m not a cat person’…it’s part of our culture, people would have been raised to think cats are like vermin and they don’t know the relationship between a human and a cat can be very loving…it’s mainly due to ignorance.”

“What we want to do is to help change people’s attitudes about cats, to help them experience what it’s like to be with cats, and for people who like cats, it’s just for them to come and just spend time with cats if they live in spaces where they can’t have pets.”

“So maybe people who don’t like cats might come here and realise ‘hey this isn’t so bad, maybe I should get one’,” he said. 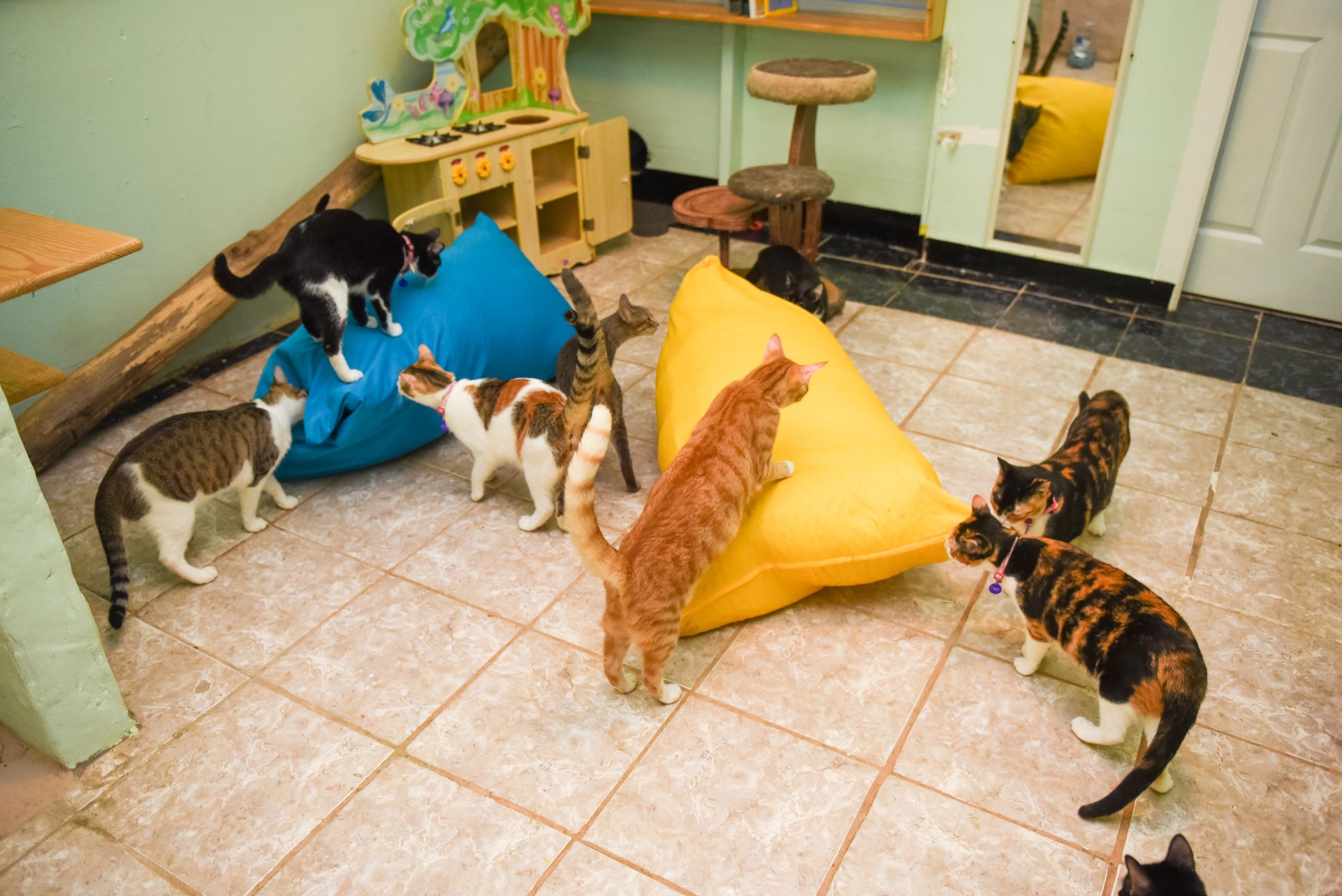 He said the café part of the idea came as he was spending time in the cattery.

“I was just observing them and I thought, this would be a nice place to have a cup of coffee, maybe do work on my laptop and just kind of have a quiet space to relax,” he said.

He said it can also be a great place for animal lovers to network.

“This can be a really great place for people to come together to share ideas and find ways to help animal welfare. This way, we can help people to find their own cats.”

“We want to change people’s hearts and minds towards cats,” he said.

The café part of the venue is kept separate to the cattery, however, the meeting space is also cat-friendly. The cats have all been spayed and are regularly checked and kept clean.

Dr Seukeran said the venue can also be used for events. 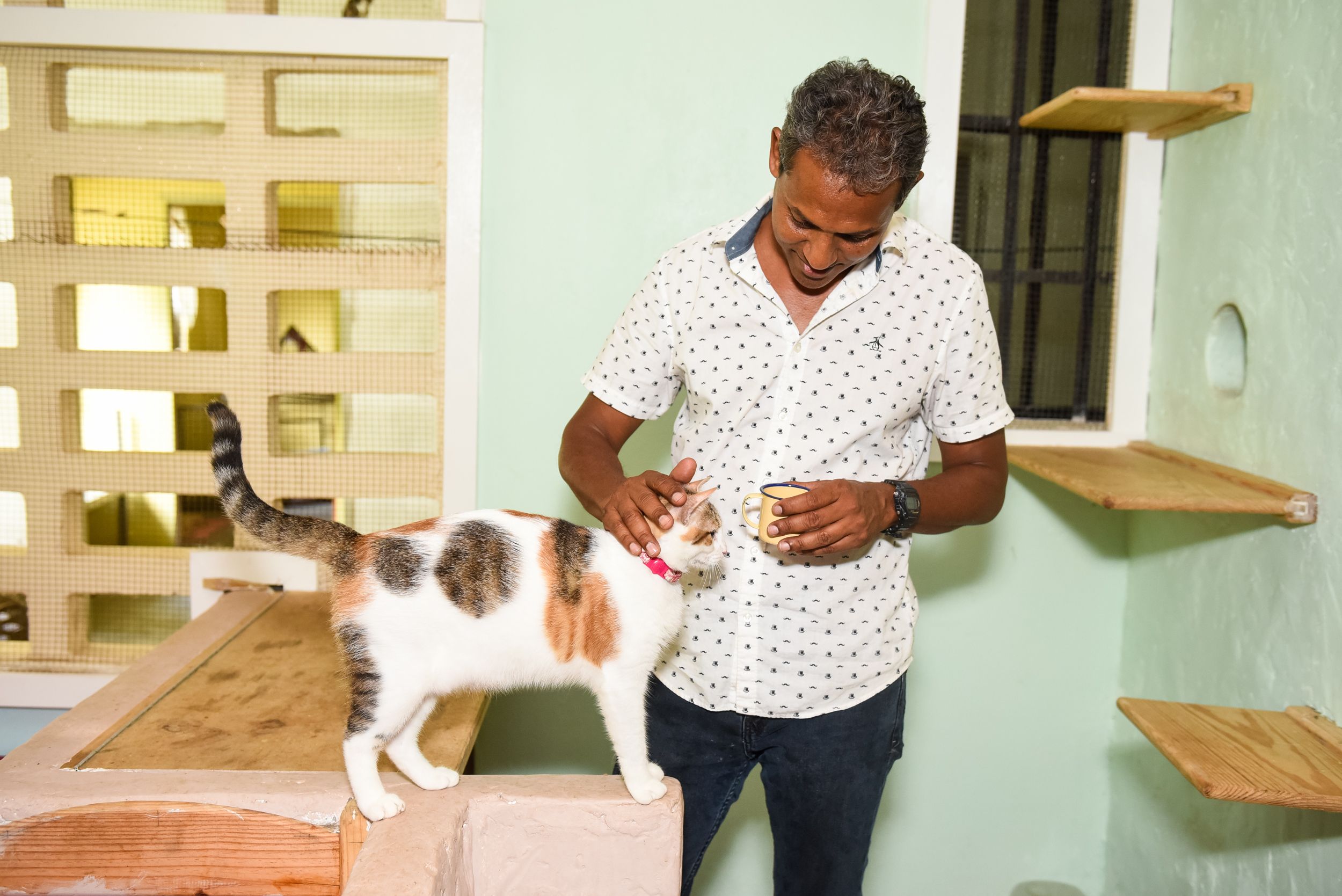 Dr Seukeran said Tenderheart Animals focuses on four pillars of care for animals, including nutrition, immunity, preventing parasites, and encouraging healthy behaviour, covered by the acronym NIPB ‘Nip It in the Bud’.

“Practicing veterinary medicine in Trinidad is very demanding and frustrating. I quickly found that I had to remind myself constantly why I do this. I called it Tenderheart to steer me back to that place whenever I needed it.  This cat cafe is an application of the Tenderheart principle to the neglect, abuse and ignorance about cats in Trinidad,” he said. 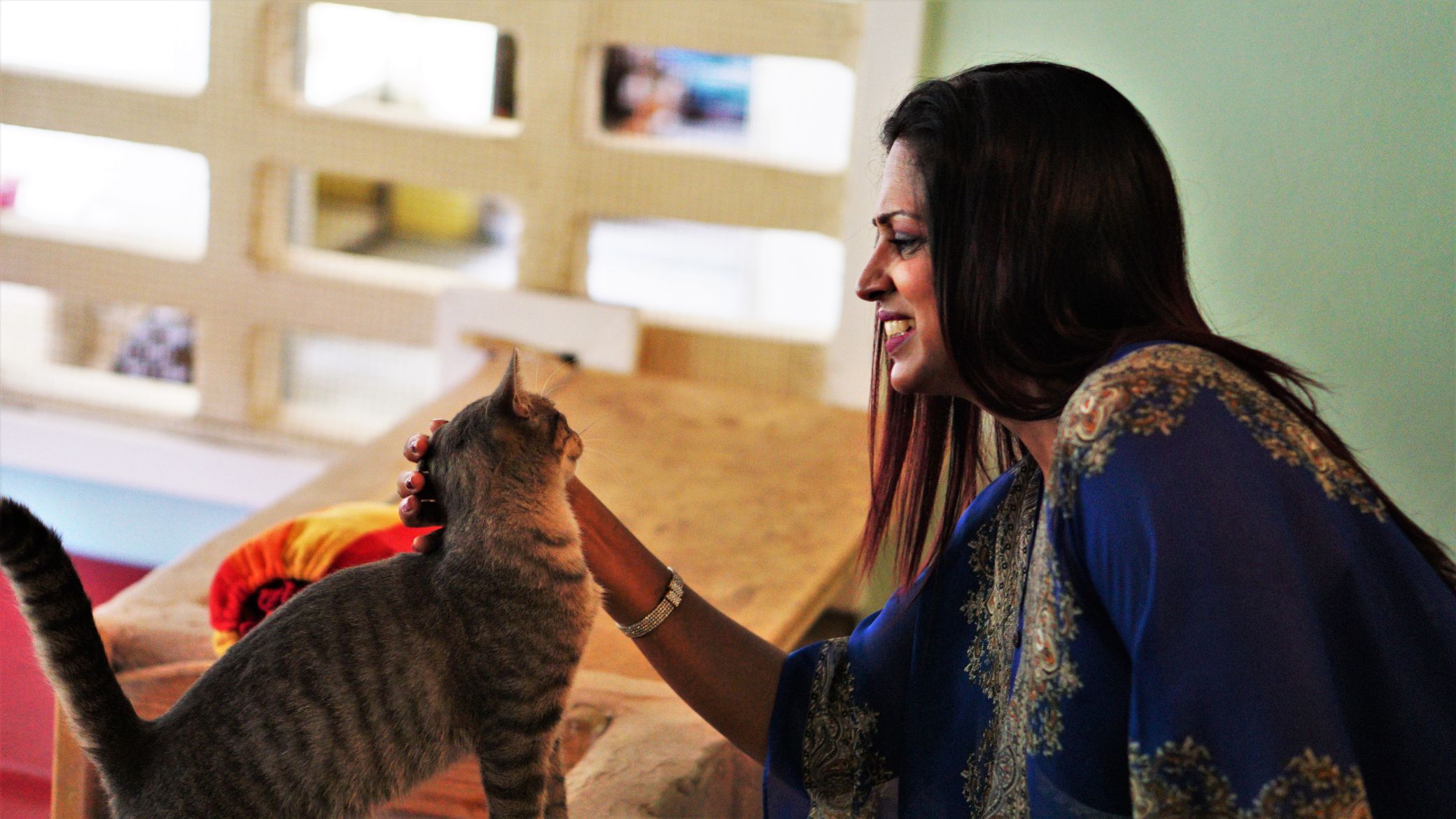 Dr Seukeran said that a review of animal welfare legislation is currently underway and he is eager to see these revised laws implemented.

“I am elated to see our welfare legislation being reviewed and public comment invited. This is a rare opportunity for us to improve the lives of the animals we share this space with and by doing so improve our own lives as well. Animal health is public health.”

He said he hopes that people will speak out as much as they can to help bring more awareness of animal welfare, to help update legislative protections.

“I hope the public can contribute as much as possible to making animal welfare amendments effective. We need people to speak up so that the people in charge can make the changes we need to stop animal cruelty,” he said.