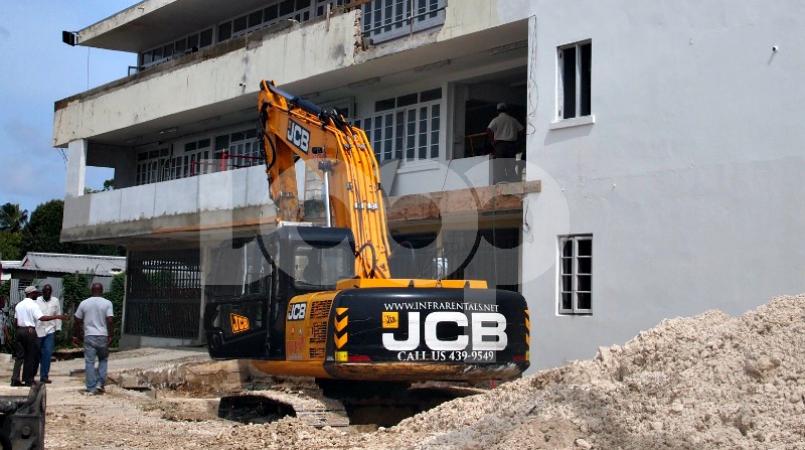 PSV operators say the delay in the construction of the River Terminal is making their job uncomfortable.

Public Service vehicles (PSV) operators are wondering how much longer it will take before the River Terminal at Nursery Drive is completed.

The River Terminal project began back in October 2015 with an estimated completion time of six to eight months. The $3.5 million project was undertaken primarily to address the needs of PSV operators and the travelling public who have been complaining of poor bathroom facilities and lack of shelter when heavy rains fell.

A visit to the site would reveal that the project is still a long way off from being completed. When Loop News visited today there was a bobcat conducting excavation work while a few workmen were on the inside of the building doing assessments. Building Manager Richard Austin was tightlipped on a projected deadline for the project.

Speaking at a St. James constituency meeting over the weekend, Lashley said he could not give an exact date when the project would be completed. He did say the first phase of the project was currently underway and the second phase would hopefully begin soon.

Antoine Holder, a PSV operator on Route 6, told Loop News the lack of a proper terminal was making their job difficult, especially on days when there was heavy rain. Holder also said the lack of security for the area often meant commuters were afraid to use the River Van Stand at night which meant less work for them.

Speaking on a separate occasion a few weeks ago, President of the Association of Private Transport Operators (APTO), Morris Lee said, “We look forward to the completion of the River Terminal and we hope that Government will then move swiftly to deal with the Seaview Terminal but commuters deserve to go to well-appointed terminals and the drivers and conductors should be working in an environment that would motivate them to come to work.

Noting that the terminals are used by Barbadian residents as well as visitors to the island, Lee added:

“We have been making representation for the enhancement of the terminals and psychologically, people respond to the environment that they operate in. If you hang around dogs for too long you would start getting fleas and essentially, we have been pleading with the authorities to enhance the terminals. Given the fact that we transport close to 70 per cent of commuters, you would want to have terminals that represent what defines the Barbados that we have come to know.”

The terminal, when completed, is expected to include a commuter waiting area, covered access to buses, a police post, public restroom facilities as well as an information centre.?