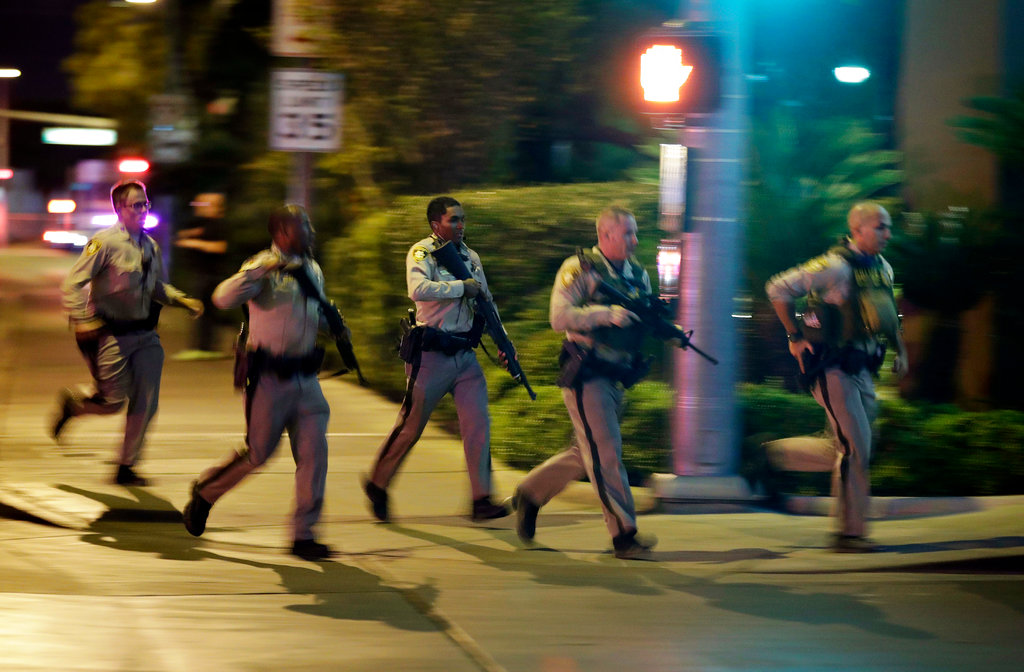 Police run toward the scene of a shooting near the Mandalay Bay resort and casino on the Las Vegas Strip in Las Vegas. (AP Photo/John Locher, File)

The jangly music of slot machines echoed through the packed room as police officers methodically made their way across the casino floor with their guns drawn. But the hustle and bustle of Las Vegas went on and gamblers just continued tugging at slot handles, seemingly unaware that just upstairs a man was unleashing a hail of gunfire in the deadliest mass shooting in modern U.S. history.

"There's a shooter! He's shot and killed multiple people already," a police officer shouts as he passes bystanders, on the hunt for the man who killed 58 people from his high-rise hotel suite.

The officers carefully work their way up to the 32nd floor of the Mandalay Bay casino-hotel. As they approach his suite from a stairwell, another officer yells out, "Breach! Breach! Breach!" before a loud bang and a fire alarm begins to sound.

But more than seven months after the Oct. 1 massacre, police are no closer to answering the key question in the investigation: What led the retired accountant and high-stakes gambler to unleash his deadly barrage of bullets?

On Wednesday, police released hours of footage from two officers' body-worn cameras in response to a lawsuit by The Associated Press and other news organizations.

The videos showed officers inside Paddock's room looking behind curtains, and one grabbed an assault-style rifle from the ledge of a broken window. The gunman's body is seen on his back, clad in dark pants and a long-sleeve shirt with a glove on his left hand. A pool of blood stains the carpet near his head as a police SWAT officer walks past.

Officers noted the amount of firepower Paddock had — more than 10 high-powered firearms. Others talked about Paddock "blasting out the window" and pointed to "a whole suitcase full of loaded AK mags."

Investigators believe the 64-year-old acted alone in the attack and fatally shot himself before officers burst through the door of his hotel suite.

The body camera video that was released on Wednesday, which totals about 2½ hours, represents a sample of hundreds of hours of body-camera recordings and does not provide a complete view of everything police discovered when they entered Paddock's suite.

The footage doesn't show what the first officer through the door saw because he didn't activate his body camera.

The revelation that the officer failed to activate his camera raised questions about whether officers followed department policy. The department requires officers with body cameras to activate them during calls that lead to interaction with residents and searches.

Police refused to say whether the officer would be disciplined for violating department policy.

The AP and other media outlets sued to obtain videos, 911 recordings, evidence logs and interview reports to shed light on the response by public agencies, emergency workers and hotel officials while Paddock fired for more than 10 minutes.