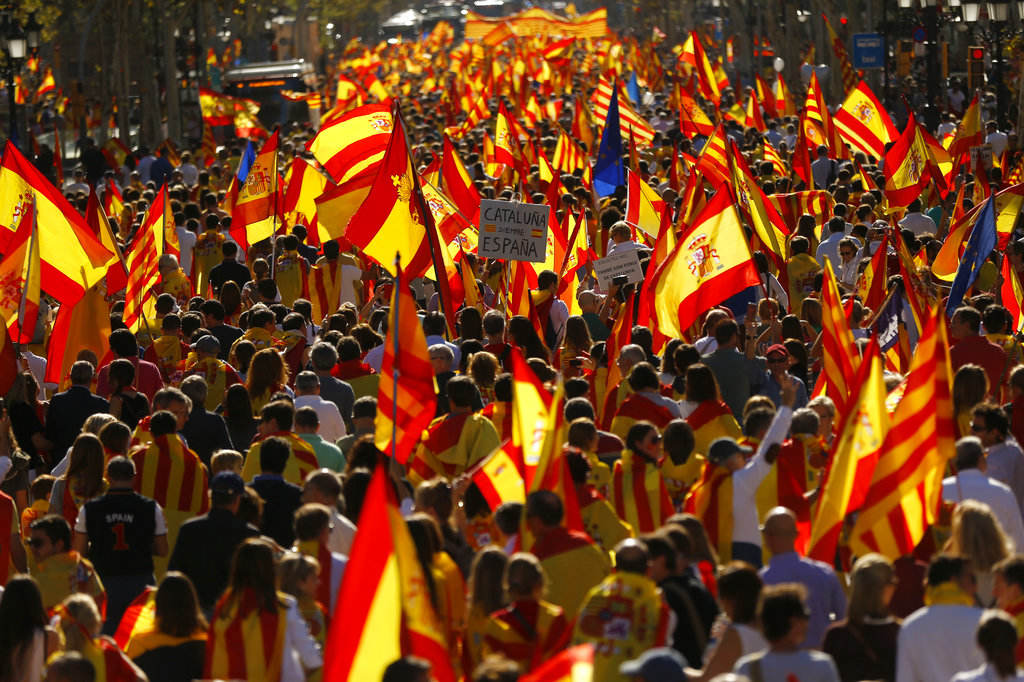 Demonstrators holding mostly Spanish flags march to protest the Catalan government's push for secession from the rest of Spain at a coffeeshop in downtown Barcelona, Spain, Sunday Oct. 8, 2017. Sunday's rally comes a week after separatist leaders of the Catalan government held a referendum on secession that Spain's top court had suspended and the Spanish government said was illegal.(AP Photo/Francisco Seco)

Thousands of people were rallying Sunday in downtown Barcelona to protest the Catalan government's push for secession from the rest of Spain.

Many in the crowd gathered in a central square carried Spanish and Catalan flags. Some chanted "Don't be fooled, Catalonia is Spain" and called for Catalan president Carles Puigdemont to go to prison.

Sunday's rally comes a week after Puigdemont and other separatist leaders of the Catalan government held a referendum on secession that Spain's top court had suspended and the Spanish government said was illegal.

The "Yes" side won the referendum with 90 percent of the vote, though less than half of the region's electorate voted. Puigdemont has pledged to push ahead for independence anyway and is set to address the regional parliament on Tuesday "to report on the current political situation."

Spanish Prime Minister Mariano Rajoy vows that his government will not allow Catalonia to break away from the rest of the country.

In an interview with the Spanish newspaper El Pais published Sunday, Rajoy said that he will consider employing any measure "allowed by the law" to stop the region's separatists.

Rajoy said that includes the application of Article 155 of the Spanish Constitution, which would allow the central government to take control of the governance of a region "if the regional government does not comply with the obligations of the Constitution."

"The ideal situation would be that I don't have to find drastic solutions, but for that to happen there will have to be some rectifications (by Catalan leaders)," Rajoy said.

Large rallies were held Saturday in Madrid, Barcelona and other cities to demand that Rajoy and Puigdemont negotiate to find a solution to Spain's worst political crisis in nearly four decades.

Pro-union forces are hoping to gather more steam with Sunday's protest in Barcelona after a series of large businesses, including Catalonia's top two banks, announced they were relocating their headquarters to other parts of Spain. Other companies are reportedly considering leaving Catalonia to avoid being cast out of the European Union and its common market in the case of secession.

"I hope that nothing will happen. Because (Catalonia) is going to lose more than (Spain) because businesses are fleeing from here already," said protestor Juliana Prats, a Barcelona resident. "I hope it will remain like it has been up until now, 40 years of peace."

The most recent polls taken before the referendum showed that Catalonia's 7.5 million residents were roughly split over secession.