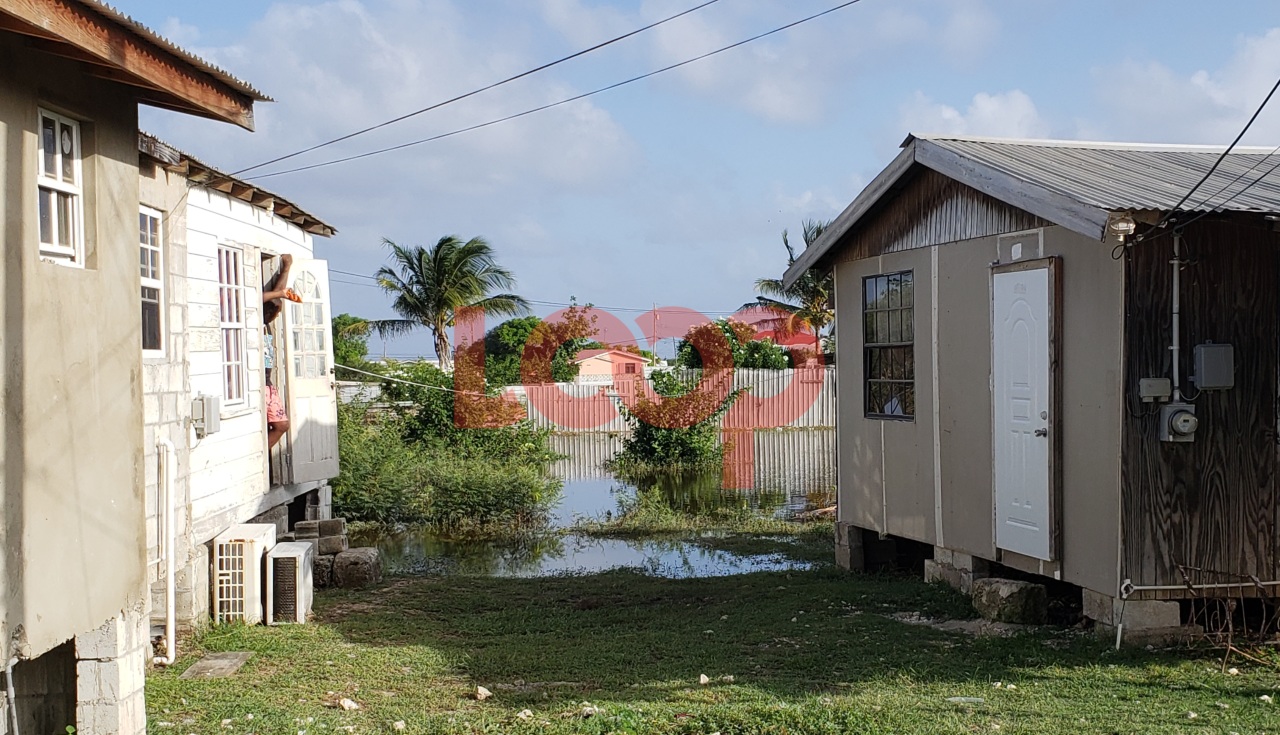 Ryan Crawford in the doorway of his home looking out.

Getting out his home through a window if the floodwaters after a Tropical Storm or hurricane do not recede, is a norm for Ryan Crawford.

The 38-year-old, who lives alone, told a trying story that would have forced many others to vacate their premises and seek residence somewhere else on this rock.

Yesterday, looking at the pond to the left of his house since Tropical Storm Kirk passed Barbados on Friday, with a shrug he said: “It aint terrible this time.”

Noting that anytime he can still exit his house via his door and step on land, though it’s waterlogged, is a good day after a storm.

As Loop looked at what the older people in the community termed ‘Bell Pond’, the 21 Degrees construction worker who has resided at his present location for 10 years now, asserted: “This is minor. It does go all the way back out past all the houses.

“You does can’t get in and out. You does gotta wait till it all go down. But as I said, it wasn’t so terrible as usual.”

His neighbour is near 70 years old, and he said he has no idea how his neighbour fares. He said: “You really can’t get out, so you can holler and ask if they okay, but otherwise than that, nobody can’t get out at all.”

With the water settling after the thunderstorms and downpours, he said it’s basically a matter of putting up with the subsequent terrors or leave his home and return when it’s all cleared away.

“So either I leave, like try to get through a window and go by somebody till all go down, or stand and take all the [mosquito] bites and stuff like that. Sometimes it does take a whole week before you can come outside the house.”

Luckily for Crawford, last year when Hurricane Irma and Hurricane Maria swept through the Caribbean causing much devastation and destruction, he said he was out of the island.

Therefore he got some relief from his annual situation. “Last year I wasn’t here, but the day before I think they had one and it was real terrible. It was a lot of water. It was literally like a beach out hey.”

Asked about the decision not to enforce a national shutdown as a result of Tropical Storm Kirk, he said: “It does be terrible down here”, but his employer understands. He said he took videos and showed them that he can’t get out. “So they does wish me luck and stuff like that.”

Saturday evening, Crawford may have been battling not just the mosquitoes, but a foul smell beginning to come from the pond. Yet he was a happy, smiling, proud man after seeing the Prime Minister, Mia Mottley and her team of Ministers along with Department of Emergency Management (DEM) staff and members of the Barbados Defence Force (BDF) walking through his community - a first for the Ruby, Work Hall area.

Furthermore, he added: “This is the first in my life I ever see anybody ever come and pump off the water, never see it in my life.”

Loop asked him how he felt about that, and with a big grin, he said: “I feel proud. I feel great!”

Initially, a resident who purchased pipes and was trying to pump some of the water in the pond into a nearby well was pumping off the water. At some parts, the pond was as much as three or four-feet deep. On seeing the vast pool of stagnant water, the Prime Minister immediately called on the DEM team to get the government’s larger pump to St. Philip to provide relief with haste.