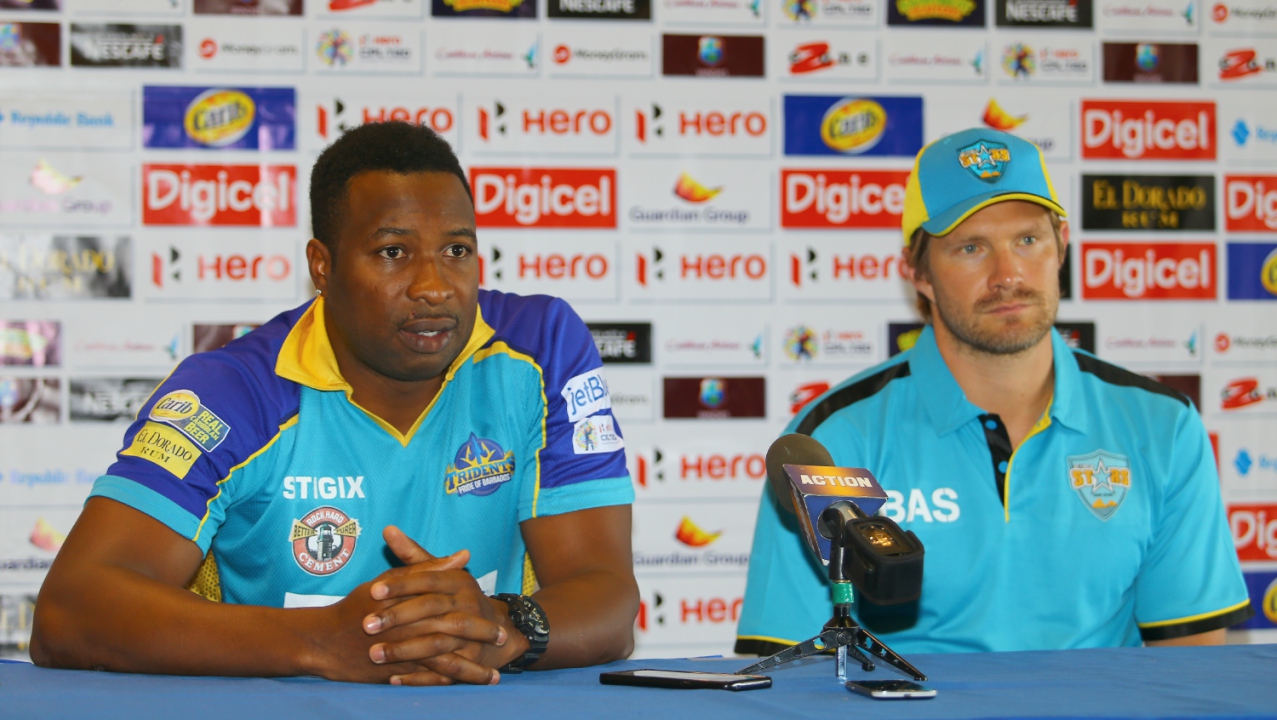 In this handout image provided by CPL T20, Captain of Barbados Tridents Kieron Pollard makes a point to the media as Shane Watson captain of the Saint Lucia Stars listens during the pre-match press conference ahead of match 27, Barbados Tridents vs Saint Lucia Stars, held at the Hilton Hotel on August 30, 2017 in Bridgetown, Barbados. (Photo by Ashley Allen - CPL T20 via Getty Images)

After a 99-run loss to the Guyana Amazon Warriors in the opening game of the Barbados leg of the 2017 Hero CPL on Tuesday, captain of the Barbados Tridents Kieron Pollard and his team will be coming out with a "fighting spirit" during Thursday's match against the St Lucia Stars.

That was the assurance during the pre-match media briefing with Pollard and Stars captain, Shane Watson, at the Hilton Barbados on Wednesday.

Watson, who took over the captaincy from Darren Sammy for the team that is yet to win a match, explained that they will be seeking to win this one for pride:

"I know we've got a lot of pride to play for with the Stars. Obviously, it hasn't been a good season at all, so we still have a lot riding on this last game to finish off as strongly as we possibly can.

"It's a great place to be here in Barbados - got a lot of awesome memories playing cricket here at Kensington Oval. So I'm excited about playing here, I know the rest of the guys are going to be out to try to restore some pride in some way."

Stressing that many players on the squad are not accustomed to losing, he noted that they will be playing for both team and personal esteem:

Pollard was adamant that the Tridents would be able to bowl the fans over with pride, once they put the first game behind them and focus on the tasks ahead:

"After last night [Tuesday] the guys are disappointed, but the good thing about it as I have said is that we have put ourselves in this position with our backs to the wall, we tend to see cricketers come out and play a lot more fearless... hopefully, that's the mentality...

"We have our destiny in our hands, we have three games and we're going to take it game by game."

When asked if the team was affected by the long break before Tuesday's match, he said, "In hindsight, you can say that... hindsight is the best cricketer that ever played this game.

"But I think we came up against a very special bowling performance there from Sohail Tanvir - that's the same guy we faced eight (or) nine days ago and it wasn't like that. So when a guy has his night - not only in T20 cricket, but in cricket - when it's your day or your time, no one can stop you. And I think he bowled brilliantly, broke the backbone of our batting lineup. He got our four main batters and then with that happening we didn't stand a chance after."

Pollard also addressed concerns about his decision to bat first during the match with the Guyana Amazon Warriors, stressing that the Tridents did not have the expected home advantage of practising at Kensington Oval:

"We didn't know what we were going to get at Kensington Oval... We got to the Oval one night before we actually played the first game. So we didn't have a clue what to expected and getting an opportunity winning the toss and seeing what the wicket is going to do, I think would have given us a better chance. It worked against us, but these things happen. It's a decision you make and you stand by it.

"But as I said home advantage should be home advantage and if we had an opportunity to play on the square to see what was actually taking place, see the different pockets you can hit and different things you look for as a home team - we didn't have that opportunity, so we were on the same boat as Guyana... Guyana used our home conditions better than us."

He nevertheless urged Tridents fans to "come out and keep supporting us. We have three games, that's a positive for us. The other teams that came here they have one more game to play each - Guyana has to go to Jamaica and still try to win... We have three more games to play and we see in T20 cricket once you get in a momentum it can also take you straight through. So it's just a part of finding that right balance getting that win, taking the positives and moving forward."

Sangakkara leads Tallawahs to win over Stars at Sabina Park