The Flood Warning in place for Barbados has been extended until 6 a.m. Tuesday, September 19.

In a 5 p.m. bulletin, the Barbados Meteorological Services (BMS) said, "Feeder bands trailing the southern side of Hurricane Maria continue to [produce] copious amounts of moisture and showers across Barbados and the southern Lesser Antilles."

As a result, the island will continue to experience intermittent spells of moderate to heavy showers, thunderstorms and gusty winds for at least another 12 hours.

Rainfall amounts of 3 to 5 inches have already been recorded across some sections of the island and any additional rains will lead to further flooding.

The system continues to move west-northwestward at 10mph (17 km/h) away from Barbados and as a consequence the threat to Barbados has diminished. However, wind speeds ranging between 20 to 35 mph (32 to 56 km/h) with higher gusts will continue to affect the island during the afternoon and into tonight.

Large southeasterly swells of at least 4 to 6m (13 to 20 ft) are also forecast to continue affecting the marine area this afternoon and into tonight.

UPDATE [September 18, 11:30 a.m.]: The Flood Warning for Barbados has been extended until 6:00 pm today, as the island remains under a Tropical Storm Watch.

This as rainfall accumulations across Barbados ranged between four to six inches (100 to 250mm). The Barbados Meteorological Services states that "moderate to heavy showers and periods of light to moderate rain are expected to persist across Barbados thorughout the day, hence the Flood Warning has been extended until 6:00 pm today."

Take a look at the full statement from the MET Office below: 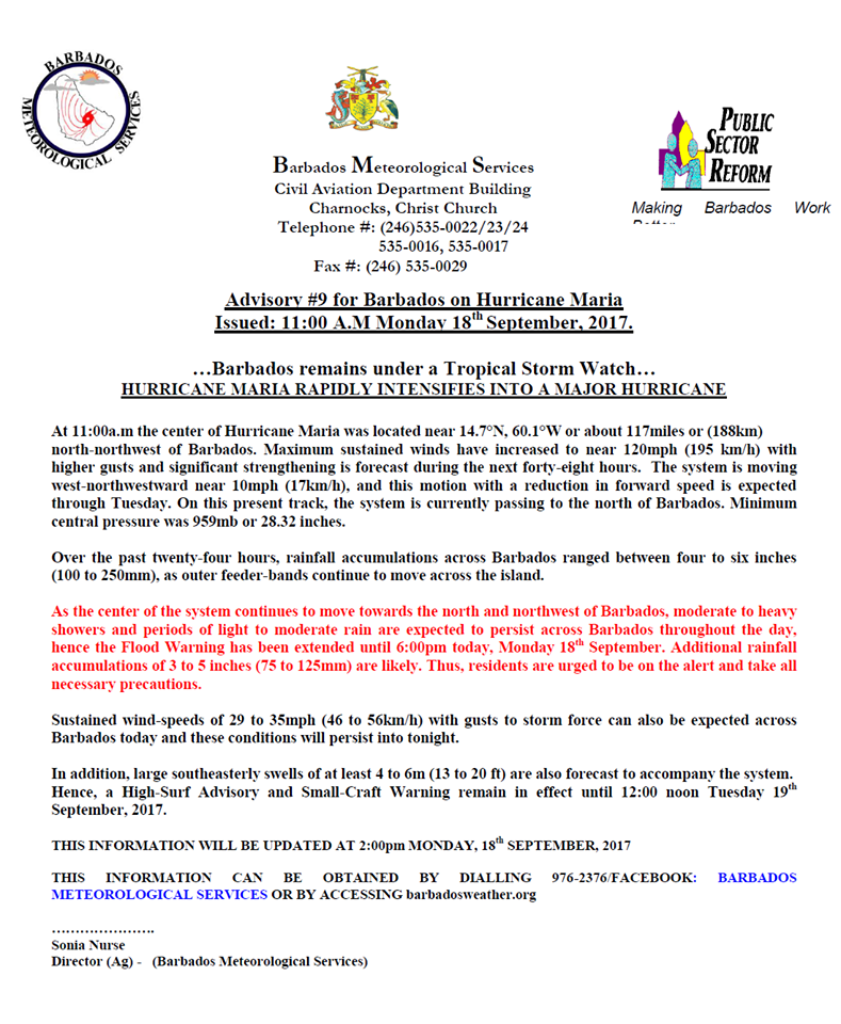 A Flood Warning remains in effect for Barbados until 12 noon today, Monday, September 18.

See the full update from the Barbados Meteorological Services below: 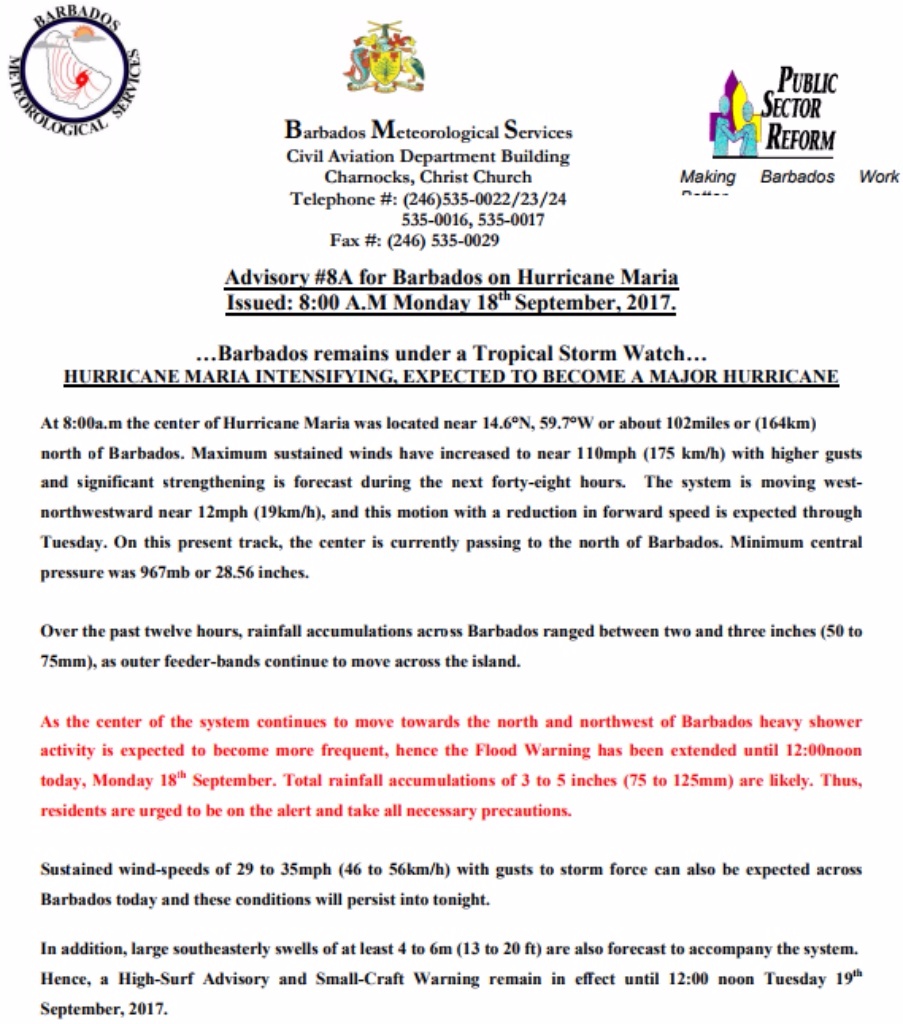 The Flood Warning for Barbados has been extended until 12 noon today, Monday, September 18, as the centre of Hurricane Maria shifts to north and northwest of Barbados and shower activity becomes more frequent.

Total rainfall accumulations of 3 to 5 inches are likely and residents are urged to be on the alert and take all necessary precautions.

Over the past 12 hours, rainfall accumulations across Barbados ranged between 2 and 3 inches.

Hurricane Maria is expected to become a major hurricane by Tuesday as it moves towards the Leeward Islands. 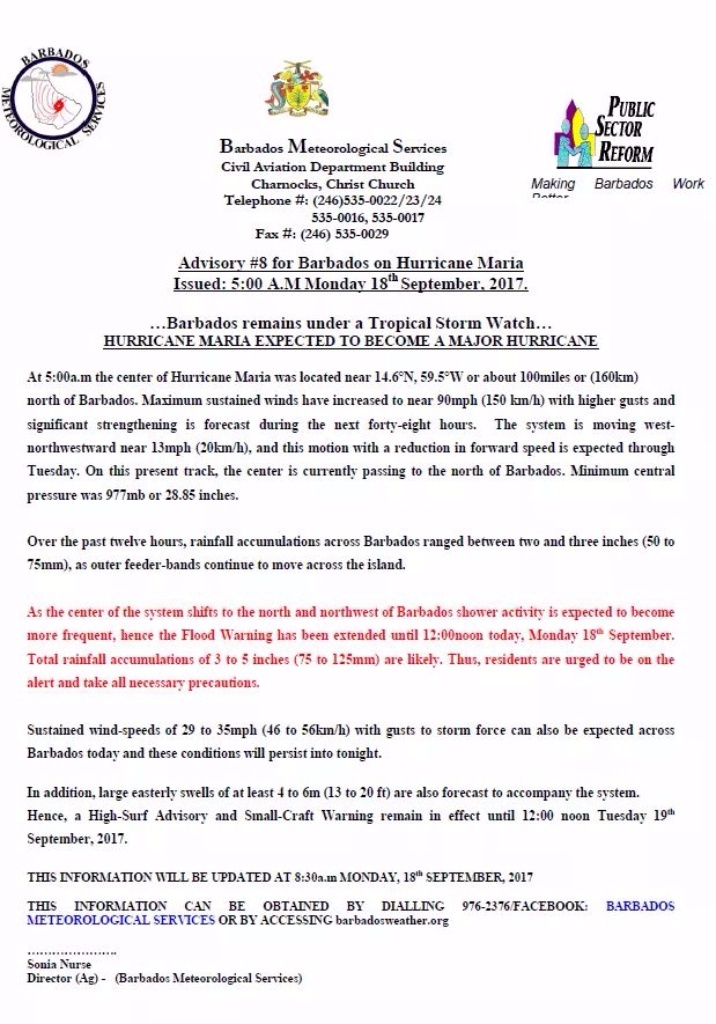 The Barbados Meteorological Services however states that Barbados is expected to be affected by tropical storm conditions.

See their latest advisory below:

The system is moving westnorthwestward near 15 mph (24 km/h), and this motion with a further reduction in forward speed is expected over the next day or so. On this present track, the center is expected to pass between 80 and 100 miles to the north of Barbados early tomorrow.

Maximum sustained winds have increased to near 75mph (120km/h) with higher gusts and further strengthening is forecast over the next 48 hours. Minimum central pressure was 982mb or 29.00 inches.

Feeder bands have been generating periods of rain, pockets of moderate to heavy showers and thunderstorms, some of which have already started to spread across the island.

As a consequence, a FLOOD-WARNING is in effect until 6:00 a.m tomorrow, Monday 18th September. Rainfall accumulations of 3 to 5 inches (75 to 125mm) are likely. Thus, residents are urged to be on the alert and take all necessary precautions.

Sustained wind-speeds of 29 to 35mph (46 to 56km/h) with gusts to storm force can also be expected across Barbados from tonight and these conditions are expected to persist into tomorrow.

In addition, large easterly swells of at least 4 to 6m (13 to 20 ft) are also forecast to accompany the system. A buoy to the north of Barbados has already reported a maximum wave height of 3.7m (12ft). Hence, a High-Surf Advisory and Small-Craft Warning remain in effect until 12:00 noon Tuesday 19 th September, 2017. 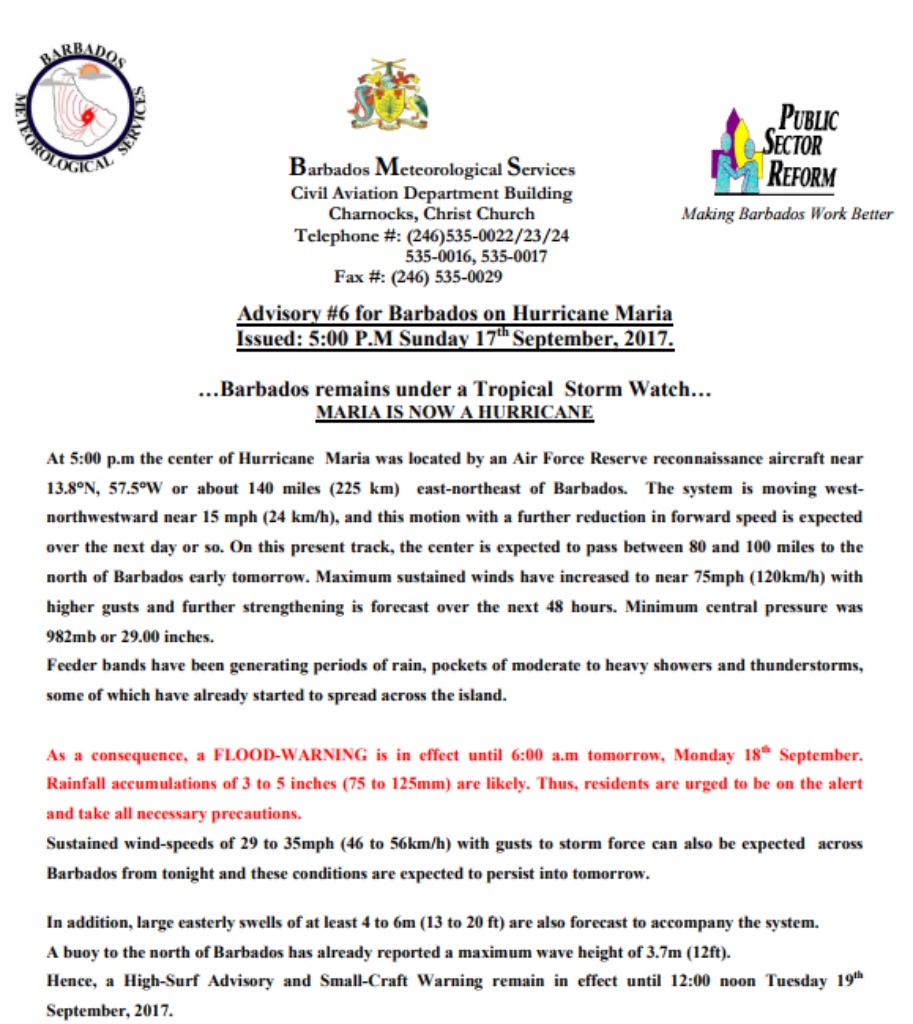 See the details below: 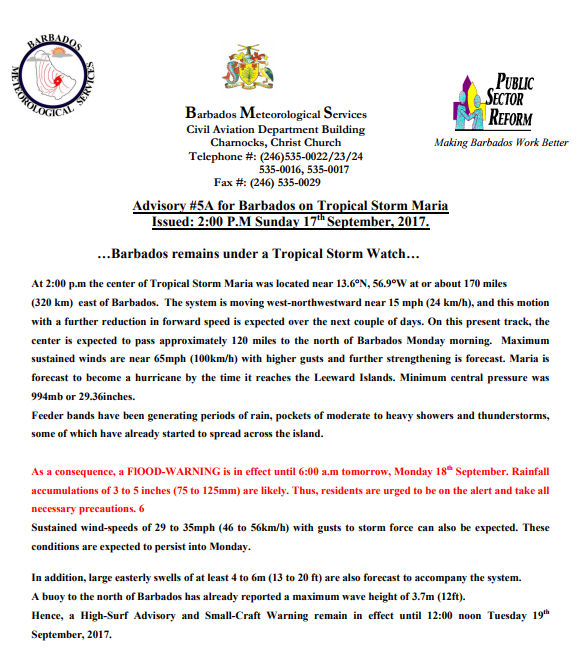 The Barbados Meteorological Services issued the warning in their afternoon forecast, stating that it will be in effect until 6:00 a.m. tomorrow.

Weather conditions have started to deteriorate across the island and it is expected to be "generally cloudy to overcast with showers, some of which will be moderate to heavy, periods of rain, isolated thunderstorms and gusty winds."

A Small Craft Warning and High Surf Advisory are also in effect, as seas are "rough to very rough in open water with swells 4.0 to 6.0m". 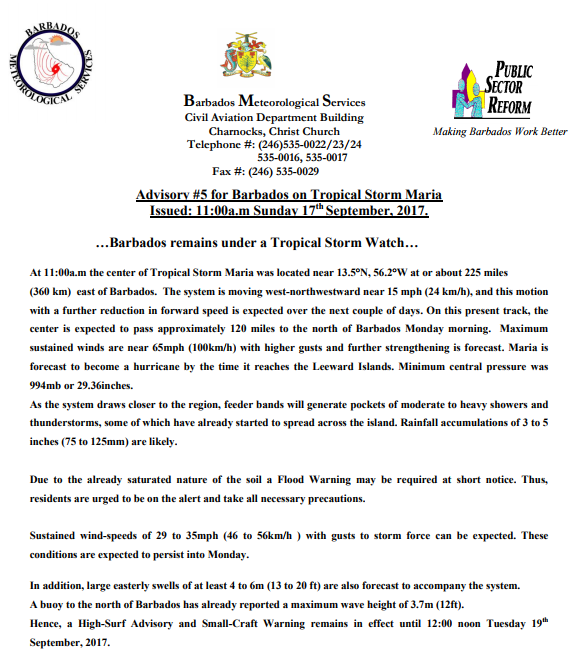 UPDATE: Barbados is expected to start feeling the effects of Tropical Storm Maria from later this morning into Monday.

This information was provided in the following advisory from the Barbados Meteorological Services: 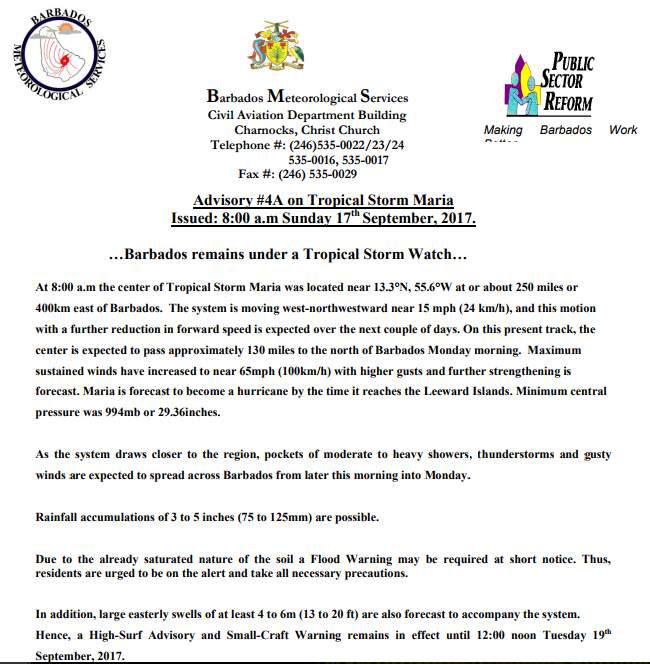 The Barbados Meteorological Services issued its latest update on Tropical Storm Maria at 5:00 a.m today, warning that the storm is nearing Hurricane intensity.

Tropical Storm Maria is expected to pass approximately 130 miles to the north of Barbados on Monday morning on its present track and is forecasted to become a hurricane by the time it reaches the Leeward Islands.

The storm is expected to affect the island from late this evening into Monday, bringing 3 to 5 (75 to 125mm) inches of rain to Barbados - a flood warning may be required. It is also forecasted to bring large easterly swells of at least 4 to 6m (13 to 20 ft). A High-Surf Advisory and Small-Craft Warning therefore remain in effect until 12:00 noon on Tuesday, September 19.

See the full advisory below. 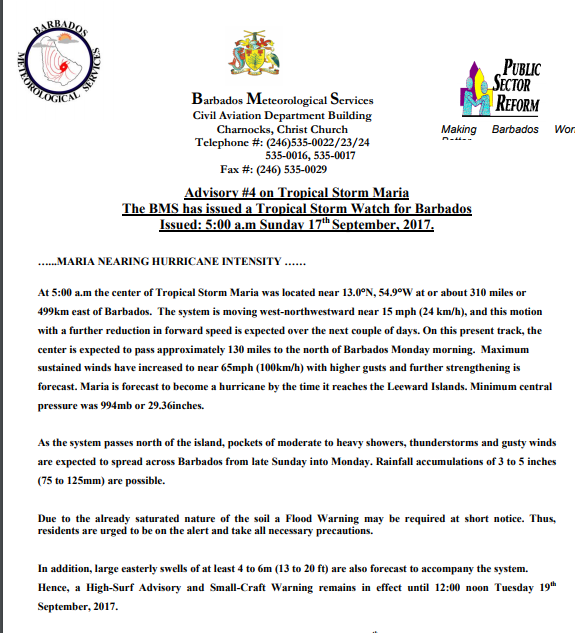 DEM warns Barbadians not to be complacent as Tropical Storm approaches