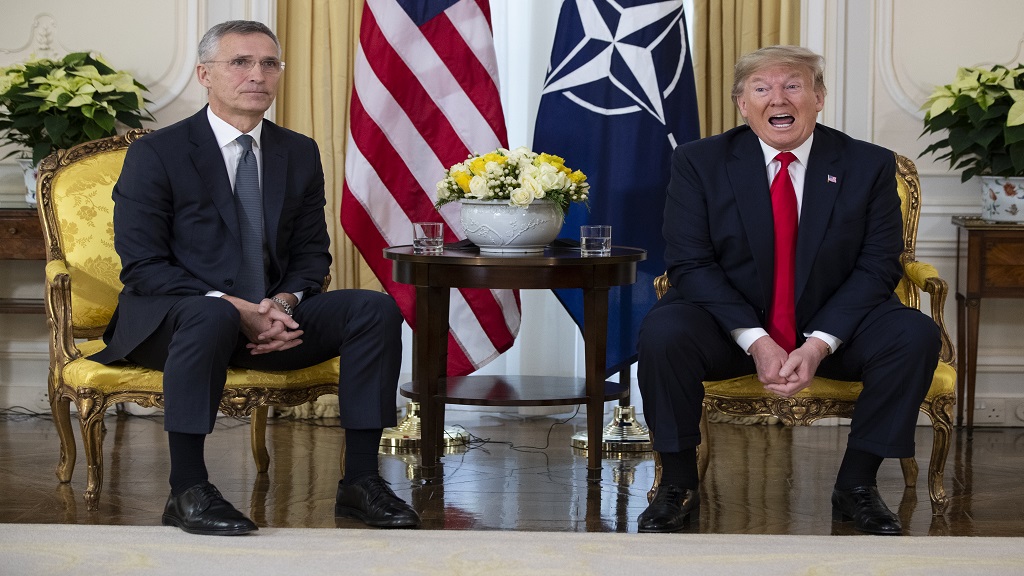 President Donald Trump criticised Democrats at the opening of a NATO leaders' meeting Tuesday, calling the impeachment push by his rivals “unpatriotic" and “a bad thing for our country."

Trump, who commented while meeting with NATO Secretary-General Jens Stoltenberg, is upset that Democrats scheduled an impeachment hearing while he is abroad.

The House Judiciary Committee has set a hearing on the constitutional grounds for Trump's possible impeachment on Wednesday just before he wraps up two days of meetings with NATO alliance members in London.

“I think it's very unpatriotic of the Democrats to put on a performance," Trump said. “I think it's a bad thing for our country."

Trump isn't the only one complaining. Secretary of State Mike Pompeo, White House counsel Pat Cipollone and adviser Kellyanne Conway all have criticized the committee's timing.

“I'm not even thinking about it," Trump insisted anew Tuesday.

Before the trip to London, Trump slammed “Do Nothing Democrats” for scheduling the hearing during the NATO meeting as “Not nice!”

He also said that during the flight he had read a newly issued Republican-prepared report on impeachment that called his decision to hold up military aid to Ukraine “entirely prudent.”

Democrats contend Trump abused his presidential powers by holding up the aid to pressure Ukraine President Volodymyr Zelenskiy to investigate meddling in the 2016 US presidential election and former Vice President Joe Biden and his son, who had a seat on the board of Ukrainian energy company.

But Trump was adamant that the cloud of impeachment wasn't undercutting his negotiating position on the international stage.

“I know most of the leaders," Trump said. “I get along with them. It’s a hoax. The impeachment is a hoax. It’s turned out to be a hoax. It’s done for purely political gain. They’re going to see whether or not they can do something in 2020 because otherwise they’re going to lose."

But even as he boasted of his relationships with NATO leaders, Trump rebuked French President Emmanuel Macron for recent comments that NATO was experiencing “brain death.” Macron argues that the US under Trump's leadership has turned away from the alliance.

“Nobody needs NATO more than France,” said Trump, who himself in the past has questioned the long-term prospects of NATO because too few nations are on track to meet the alliance goal of spending at least 2% of GDP on their own defense by 2024. “You can't just go around making statements like that about NATO. It's very disrespectful."

Trump also lashed out against France for a French digital service tax that he said unfairly discriminates against U.S. tech companies, including Google, Apple, Facebook and Amazon. There is no direct effect on the United States from the French tax, which only applies to the tech companies' revenues in France, not the United States.

The blistering comments from Trump came hours before he was to meet Macron later Tuesday on the sidelines of the NATO meeting. It marked an abrupt turn in the once warm relationship between the two leaders.

Macron hosted Trump in France in 2017 for Bastille Day celebrations in Paris. Trump reciprocated by honoring Macron last year with the first state visit of a foreign leader during his time in the White House.

Macron, however, has criticized Trump for abruptly withdrawing most of the US troops in Syria in October without coordinating with France and other NATO allies.

Trump also took a break from the NATO meetings to raise money for reelection campaign while in London, attending a hotel fundraiser with Americans living abroad to benefit the Trump Victory fund, the joint account of his campaign and the Republican National Committee. The fundraiser is bringing in $3 million for the reelection effort, according to a Republican familiar with the event.

Trump also appeared to lower expectations before the December 9 release of a Justice Department inspector general's report into the origins of the Russia investigation that bedeviled his first years in office.

Responding to a report that the inspector general concluded that the probe was properly founded, Trump said he was more focused on a separate report being prepared by US Attorney John Durham, who was tapped by Attorney General Bill Barr to launch his own investigation.

“That’s the one that people are really waiting for," Trump said.

Heather Conley, an analyst at the Center for Strategic and International Studies in Washington, said that the trip offered Trump an opportunity to highlight to voters back home that he's making progress on a foreign policy issue. The president views it “as his own personal foreign-policy success" that NATO members have increased defense spending by $130 billion since 2016.

“The deficit for many, many years has been astronomical (between) the United States and Europe,” Trump boasted. “And I'm changing that, and I'm changing it very rapidly."

However, in 2014 — before Trump was elected — NATO members agreed to move "toward" spending two per cent of their gross domestic product on their own defense by 2024. In late June, Stoltenberg said that the majority of the NATO allies have plans to reach that goal.

US impeachment hearings go live on TV with the 1st witnesses